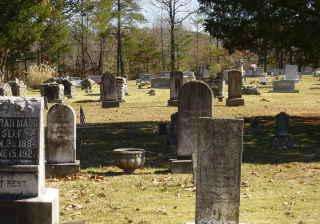 Traveling to the north end of Clay will bring a person to where the counties meet, the waters spring forth and history abounds.

In this area is a cemetery that reveals the roots of many families, some still in the area and some who moved away. Mt. Calvary Presbyterian Church is next to this recognized historical cemetery on Cedar Mountain Road. The church hosted a “cemetery walk” Saturday where individuals told the stories of the ones who have passed.

The topics included military service, disease, crime and moonshine. Marriages, divorces, births and deaths were discovered and shared while some of the presenters were in period dress. Corn fields and cotton, now gone from the area, are still in the memories of some.

To pull off the event, many people did hours of research on the deceased, including people they didn’t know.

Exactly who the first settlers were to Clayton Cove has been lost. Church records were burned in building fires, twice. Some grave markers have no marking, only the stone. There are between 550 and 600 identified names.

Attending the cemetery walk from Mt. Olive, Jimmie Grinstead found the name of Perry Newton Moore and said, “I guess that was my uncle right there.” The date of his birth is 1901, and his death is July 6, 1949. Grinstead said her father told her his brothers died after someone shot them in an argument over a woman.

One of the brothers died there at the July 4 picnic and the other, evidently Perry Newton Moore, died two days later from the gunshot wound.

“My father said the brothers’ wives never returned, and although their name is on the graves, they aren’t buried there,” Grinstead said.

Crawford said she and others are still researching and want those with family roots to provide names and dates to help them identify all in the cemetery. She has confirmed that six Civil War soldiers are buried in the Mt. Calvary Cemetery.

The book “Southern Heritage, a Clayton Family Genealogy,” shows the first Clayton came to the area sometime between 1810 and 1812.

What is making research difficult is that Clayton Cove has been in three different counties since 1818. As it narrows to the north, it crosses the current St. Clair County line.

While this answers why some of the ancestors may have been in St. Clair County records in some years and Jefferson County in later years, without moving, many mysteries about the area continue to be unsolved
.

Today’s maps show the area as “Ayres.” Yet, even the older residents in the area don’t know for sure why it is named that. The assumption is that it comes from England. “Ayres” is a common English last name. But the Ayres family name is not found in the historical records of the area and no headstones have the name.

The earliest “Ayres” label for this area on the University of Alabama’s historical maps on their website is 1879.

In an earlier 1853 map, the area is labeled “Taylor,” no doubt after the Taylor family that settled in the area and had many children. Sarah Daugherty Taylor, who died in 1837, is the first known grave in the Mt. Calvary Cemetery. No record can be found of  Sarah’s son and daughter-in-law’s grave sites. Their names were Jesse and Catherine Holt Taylor. They arrived in the area sometime between 1819 and 1821, and they donated the land for the church.

By 1895, according to an Atlas, Ayres had a population of 68 and had a post office. Later, one of the Claytons became a doctor while living in the area, making house calls and attracting many to get his treatments.

Some businesses came to the area, including a blacksmith shop. But they started leaving in the 1920s. In time, the two-room schoolhouse across from the church and the Ayres Post Office closed, leaving many people going to the Trussville-Clay and Old Springville roads area where stores, a school and a post office continued.

The only evidence of commercial activity in the area is a large red-painted metal building with the roof partially pulled back by the wind, at the corner of Misty Lane and Clayton Cove. It appears to no longer be in use.

The unseen story of Ayres, also known as Clayton Cove, is revealed in public documents, family records, individual memories and the historical cemetery next to Mt. Calvary Presbyterian Church. Today, it is largely bucolic with a few small residential subdivisions, masking the more active and influential past.