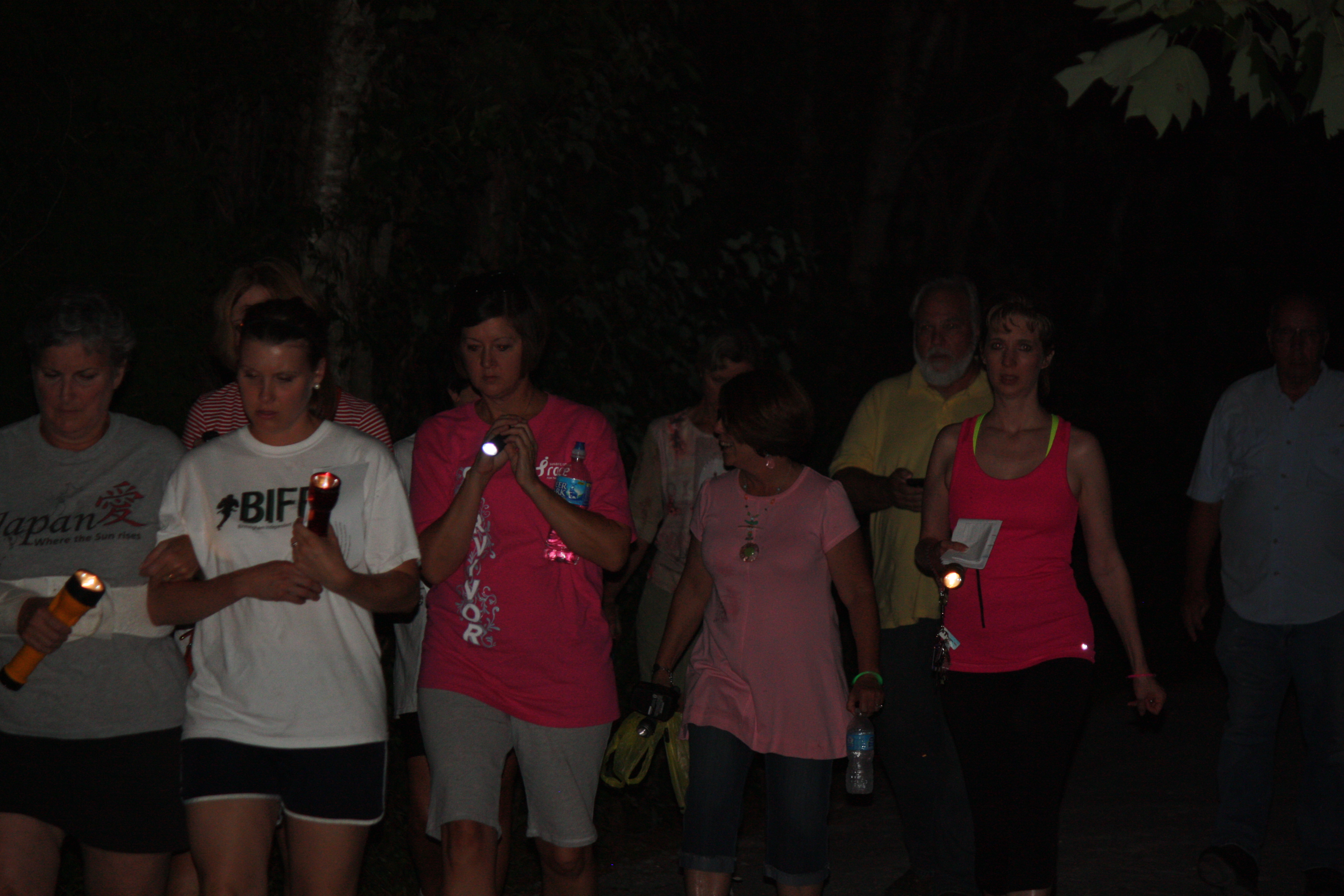 Over 100 people showed up at Cosby Lake Sunday night to have a “candle light” prayer walk in honor of Clay native Brooke Rodgers.
Rodgers, a Clay-Chalkville High School graduate and Miss Clay-Chalkville 1999, was diagnosed on June 22 with Triple Negative Medullary Carcinoma, a rare and aggressive form of breast cancer.
“This type of breast cancer is only diagnosed in three to five percent of breast cancers that are diagnosed,” Rodgers said. “When most women are diagnosed with breast cancer, it’s not this form. Mine is much, much more rare, a lot more aggressive and a little bit harder to treat.”
Rodgers said that her cancer is hard to treat because there are no hormone receptors, making hormone therapy treatment not an option. Her only options are chemotherapy and radiation. She will not do radiation, but is expected to begin the first of 24 chemotherapy treatments Thursday. She had a double mastectomy this morning and her chemotherapy treatments will last six months.
When Rodgers’ friends, Susan Logan and Nicole Roberts, found out about the cancer, they decided to do something special for her.
“We just wanted to do something for Brooke that would be a lasting memory and something that was supernatural,” Logan said. “God is the God of the Universe. He can do mighty things and He calls on His people to come to Him in prayer. In being obedient to the Word, that is what we chose to do.”
Logan, who is over the prayer ministry in her church, decided to do a prayer walk after a conversation she had with the prayer team about expanding prayer outreach. Logan knows Rodgers through her job at Salon 2000 in Trussville, where she used to do Rodger’s nails.
“I held her hands on a regular basis,” she said. “When I found out about her new journey in life, I just felt in my heart that the Holy Spirit was leading me to do something above and beyond the call of duty as a Christian.”
Logan and Roberts, who also works at Salon 2000 and was friends with Rodgers in high school, received word from Rodgers on Friday to go ahead and plan the prayer walk.
“I wanted permission, or at least a blessing or something, for her to say, “Go ahead and do it”, Roberts said. “I did not want to step on anybody’s toes. I didn’t know whether or not she would be up for it. I just felt like through the power of prayer, that the Lord can heal. There’s nothing we could do but put it all in God’s hands.”
Logan and Roberts immediately began putting the word out through Facebook and word of mouth.
“We wanted to do it before her surgery on Tuesday, so we planned it for Sunday night,” Logan said. “In two days, we were able to get the word out enough that we had at least 100 people…if not over 100 people that were there.”
Friends and family showed up at Cosby Lake Sunday night with flameless candles and flashlights to walk around the lake and pray for Rodgers and her family. Real candles were not used due to the dry summer weather.
“Just being told that I have cancer was overwhelming,” Rodgers said. “Then once my friends and family started to find out, there are no words to express my gratitude towards them. Just the love, the support, all the prayers and everything that people have been doing for me like T-shirts and prayer walks and bracelets. It’s just been overwhelming. I am so humbled by everybody’s love and support for me through this.”
Rodgers asked everyone at the prayer walk Sunday night to pray for her husband, Matthew, their two sons, Pierson, 5, and Preston, 1, as well as her parents and brother.
“This has been a lot for me to handle, but it’s not just me that’s been going through this,” she said. “It’s been my husband and my five-year-old is kind of starting to pick up on things. Even my mom and dad, and my brother
. It’s really affected all of us.”
Rodgers also said that she could not stress enough that women begin getting mammograms when they turn 30 years old.
“In the month of October, breast cancer (awareness) month, you could go and have a mammogram done and pay $100,” she said. “I know you don’t do mammograms until, I think it used to be 50 years old and then they’ve recently moved it down to 40. I had never had a mammogram, nor needed one, but after this and after hearing so many stories, I strongly suggest that women, once you turn 30, go every October when they offer it for $100 and get a mammogram. It doesn’t hurt, it’s not uncomfortable and it’s something that could potentially save your life. It’s well worth the $100.”
Roberts said that one thing that has impressed her about Rodgers is the way she plans to use her fight with breast cancer as an opportunity to help others.
“Our lives from this point forward will never be the same,” Rodgers said. “That’s OK, because that’s what God wants. I guess He wants to strengthen people around me, my relationships, my relationship with Him, my family’s relationship with Him. Everyday that I walk, to sit in the chemo chair, to get my chemotherapy, I feel like He’s strengthening me for something big to come. I don’t know what He’s using me for, if it’s to help somebody else. I don’t know, but I do have faith that He is using me for something.”