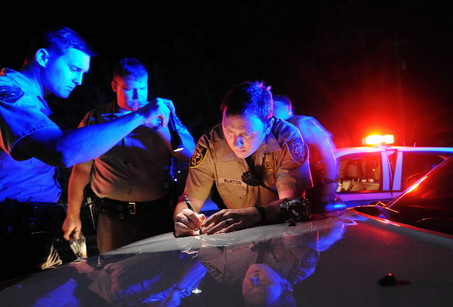 One Jefferson County sheriff’s deputy did not have to try very hard to apprehend a drunk driving suspect Sunday, as the suspect pulled his car over in front of the sheriff’s deputy to ask why the officer was following him.

41-year old Alvin Lightfoot, of Birmingham, was arrested around midnight, following a humorous turn of events.  According to Jefferson County Deputy Randy Christian, Lightfoot was driving on Reed Road, near Mary Vann Lane when a patrolling officer noticed that Lightfoot was having a hard time staying in the correct lane.

Shortly after the officer began following the suspicious vehicle, Lightfoot came to a sudden stop in front of the patrol car. Lightfoot got out of his car and, with his arms in the air, began yelling at the officer
. “Why the (expletive) are you following me?” the concerned driver asked.

When Lightfoot returned to his vehicle, the deputy noticed there were passengers in the vehicle as well. The deputy called for backup and waited for his fellow officers to come to the scene.

Officers determined that Lightfoot was intoxicated, and also took two additional passengers into custody. 33-year old Seneca Powell, of Birmingham, was taken into custody for public intoxication. The second passenger, 28-year-old Isaac Smith, also of Birmingham, was charged with first-degree possession of marijuana after the officers say they saw Smith throw a plastic bag into the woods as he got out of the car. Smith also had an outstanding warrant in Vestavia.

Chief Deputy Randy Christian said that it is “pretty rare” for this to happen. “I can just hear the driver now, telling his buddies… Don’t worry about a thing, I know how to get this deputy off our bumper,” Christian said. 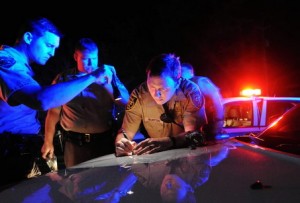