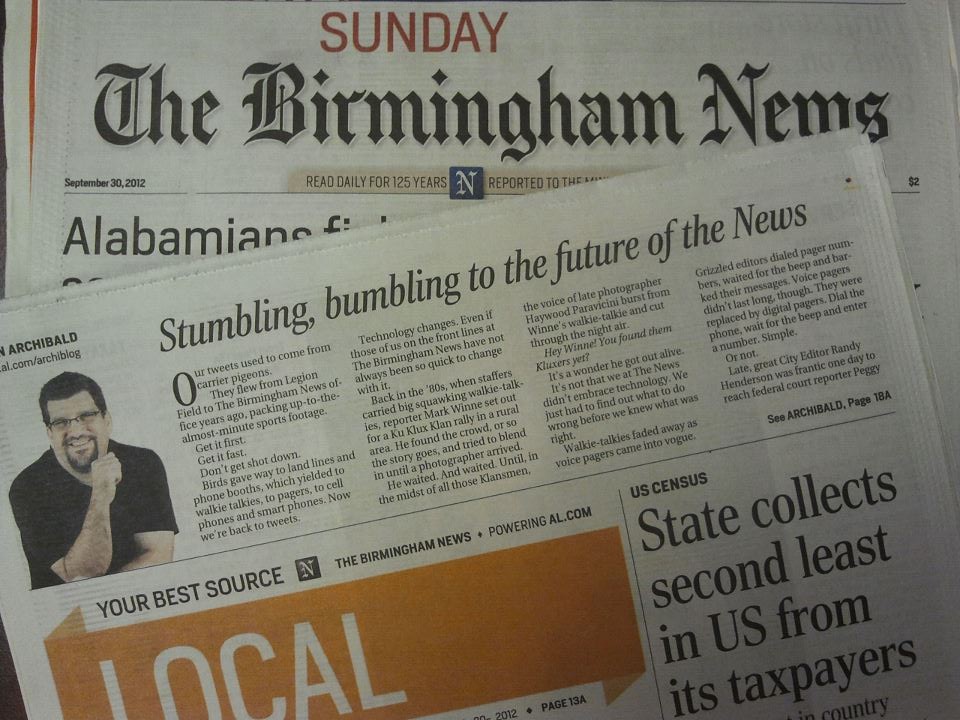 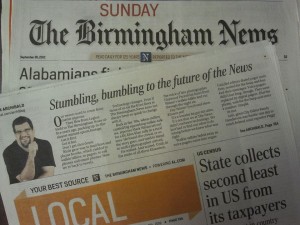 Tomorrow, our world changes. The Birmingham News will cease daily publication and go to a three-day-per-week printing schedule, while focusing on online content. Whether the move is well conceived or ill conceived, we– you and I– need the decision to ultimately be successful because we need these people and their knowledge.

I’ll admit that I laughed when I first heard the news.  David always likes to see Goliath take a shot. Then, as is the case with most knee-jerk reactions, I came to my senses.

Yes, the ivory tower editorial board of The News is a frustration for me and many others. Forget them. They write for themselves. The arrogance of any group that wants to tell us how to think is usually a turn off, but that isn’t the heart of the newspaper. In fact, because we can see the clicks, we know that editorials are often ignored by readers and I don’t blame them even when they ignore mine.

At least part of my frustration with Alabama’s largest newspaper comes from my longstanding love affair with The Birmingham News
.

As a 13-year-old kid in Tuscaloosa, my grandmother sent me a letter with a newspaper clipping.  “Bad news,” the letter said. The boss at my previous summer job in Vestavia, Gordon Zuck, had been murdered. I read the news story over and over. Shocking and mysterious, I wanted more information.

I soon discovered that I could invest 10 or 15 cents at the local Zippy Mart each day and get the news faster than my grandmother could mail the stories. I had long been hooked on The Tuscaloosa News sports section, but now I saw there was even more that a newspaper could deliver. The lifelong addiction began and it has never ended. Though, lately, I have been often disappointed in the newspaper I have held in such high regard.

Yes, four issues each week will disappear, but consider the resources that remain. The people. The people that write for you, the reader.

This newspaper has fired shots at John Archibald for ignoring facts to state an opinion and at Jeff Sentell for stepping out of bounds on a column that needed further review, but that is small potatoes compared to the bigger picture.

Archibald makes me laugh, makes me mad, and makes me nod my head in agreement like a bobble head doll, but he never makes me look away.  The king of hyperbole’s columns either enlighten me or force me to strengthen my case for opposition, so I read every one. Win win.

If you love high school sports, you have to love Sentell. No one, absolutely no one, has done more to promote prep sports in the digital age.

Can you be an Auburn family member and do without Charles Goldberg? I doubt it. If you’re old school Bama, can you live without old school Don Kausler, who still understands that an anonymous blog isn’t a source? No way.

Do you care about the bankrupt county in which you live? Do you know what is going on in said bankrupt county? If you answered yes or yes, then thank Barnett Wright, the walking, talking encyclopedia of all that is Jeffco. You can Google the subject, but you can’t Google his brain. Only he can tap and report that vast source of information.

Then there are people like Bill Thorton. I can sit beside, observe and report the same events as Thorton, but I still learn something from his articles. He is the consummate newspaper reporter. Ethical and accurate, he is a man to be emulated and we should all be grateful that he wasn’t eliminated.

There are more. Carol Robinson, Kent Faulk, and Marie Leech, among others, who keep us on our toes and informed as well as any news staff in the business. These valuable resources and their sources remain.

Radio and television’s instant reporting threatened newspapers decades ago, but the 30 second sound bite was no match for the newspapers’ depth. The Internet allows newspapers the best of both worlds, so the change is understandable, if hard to swallow.

For a weekly, like The Trussville Tribune, online access has made us relevant on a minute by minute basis. For a daily like The Birmingham News, online content also has advantages, which has led to changes.

In mentioning the people who remain, we must acknowledge that talented people are leaving, too. They will become great resources in other areas of media, you can count on that.

In the meantime, even if you can’t force yourself to pull for The Birmingham News, try to pull for the people. They are the heart and soul of reporting and we can’t live without them.