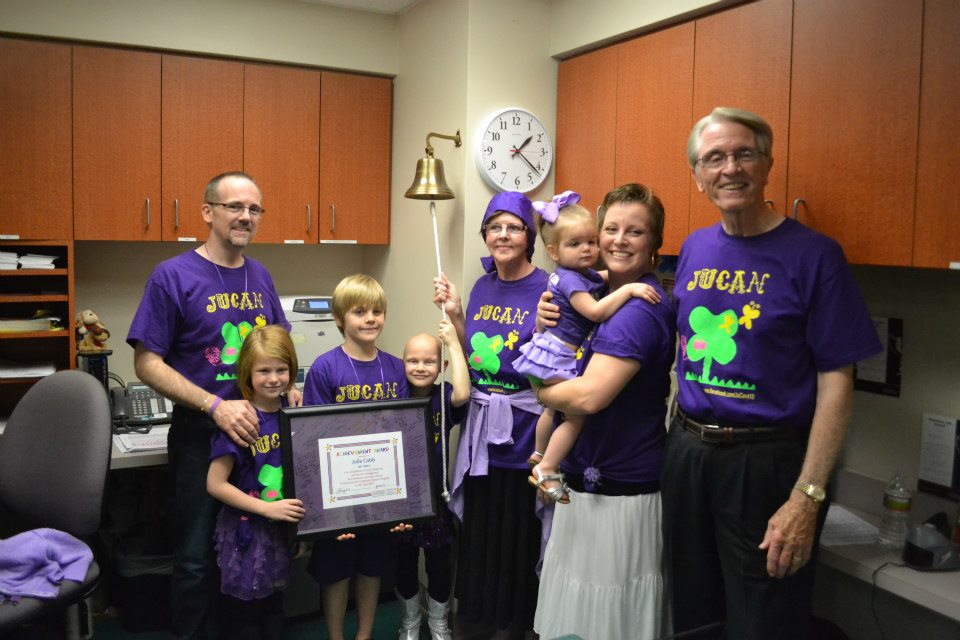 The Cobb family with Julia as she rang the bell on Aug. 27. 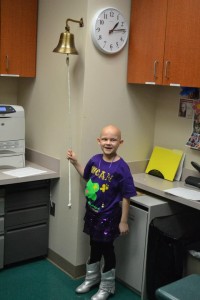 “JuCan do all things through Christ who strengthens her.” This is the motto of Julia Cobb, a seven-year-old from Springville who was diagnosed with Ewing’s Sarcoma, a rare type of bone tissue cancer, last December. After being diagnosed, Julia’s father, Jonathan Cobb, told her that the first three letters of cancer spell “can.” Combining this with Julia’s name, the family coined the term JuCan.

“Right from Ju’s lips to God’s ears… ‘Ju Can – you can – God Can’” is Julia’s message, said her mother, Jennifer Cobb.

Julia completed her treatment at the MD Anderson Cancer Center in Houston, Texas and rang the bell at MD Anderson’s Children’s Cancer Hospital on Aug. 27.

“The ringing of the bell is an MD Anderson tradition upon final completion of a patient’s last treatment,” Jennifer said. “There are bells all over the hospital that are strategically located where a patient can ring it in their own department.  Ju was honored to have our family, patient friends and hospital staff to join her as she rang it loudly after nearly 10 long months of intense treatment.”

Julia will now be watched closely at MD Anderson for two years, with MRI’s every three months. After that, she will continue to have MRI’s done yearly for a minimum of 10 years.

“Ewing’s Sarcoma is very aggressive, but I believe we are done,” Jennifer said. “Ju is cured and we are so grateful to God.”

Julia’s father, a pastor at Ridgecrest Baptist Church in Trussville, said that the family will continue to live in Houston for now.

“Right now, it seems to be more of a permanent move at this point,” Jonathan said. “Since we’re here, we think that maybe it’s providential. We feel like we’re probably in a good place to help encourage other people.”

Although the Cobb family will remain in Houston, they plan to return to Alabama in the near future to celebrate Julia’s victory over her cancer.

“When Julia was first diagnosed, I told the Springville Elementary School principal and my church that we would one day return for a JuCan ‘Victory’ party,” Jonathan said. “That said, we hope to return in the near future, perhaps October or November, to celebrate with our many friends.”

While in treatment, Julia and her parents received phone calls and emails from Julia’s school friends to ask how she was doing.

“Julia said that she wanted to return to “show them,” Jonathan said. “Many of Julia’s friends have been frightened and concerned and we wanted make the trip to Alabama to let them see firsthand that she’s OK, and also to say thank you to the community.” 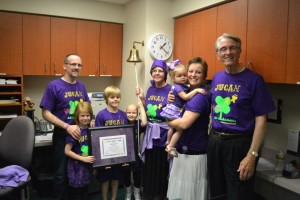 The Cobb family with Julia as she rang the bell on Aug. 27.

Jonathan and Jennifer are currently collaborating to write a book about their experiences with cancer.

“I had been working on one for my cancer journey, so I think now we’re just kind of combining our efforts and our knowledge and our experience together,” Jonathan said. “It doesn’t stop with just us. My son, actually, is writing a (children’s) book for siblings and for pediatric patients going through cancer.”

“The fabulous foursome…are happy as long as they’re together,” Jennifer said. “They laugh and cut up like old times and it makes our hearts happy to see them play like nothing ever happened. But, they are different now.  They have found passion in encouraging others with video messages or phone calls and prayers.  They love to visit the sick (often older people) who we find need encouragement. They say prayers for them.”

The children also stay busy with the Arts In Medicine Program, offered through MD Anderson.

“(They) have found artistic expression to be an outlet, as well as an avenue to create art for various projects,” Jennifer said.

The family has also started the JuCan Organization, whose ministry it is to help families in similar situations and find themselves with a “scary and sudden” cancer diagnosis.

“The Cobb family has been sharing our testimony of what God has done in our lives,” Jennifer said. “We have been bringing our story of light, hope and wonder to churches and various groups.”

Although driven to help others, the Cobb family still has struggles of their own, as Jonathan had to suddenly leave his job and move to Houson with his family.

“The financial burdens are extreme as the medical and living expenses continue to mount as a result of treatment,” Jennifer said.

Anyone who wants to donate to the Cobb family can do so online at jucan.cc or at any Wells Fargo Bank Branch through the Julia Cobb Cancer Fund. To find out more about helping Julia, visit www.facebook.com/jucan413, or Twitter @juliatcobb.

“She is our hero,” Jennifer said
. “I dare say anyone has done this arduous journey with such grit, determination, grace and joy (and, yes, I said joy). There is no ‘I’ in cancer and we are thankful to the thousands of people who have prayed and continue to support the Cobb family. From Springville, to Trussville, to Birmingham and all around the USA,  ‘Team JuCan’ is a mighty army of people who represent the best of faith, hope, and love.”