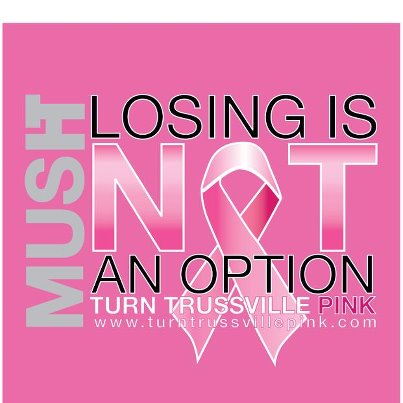 All through the city this week, businesses and individuals have been helping to 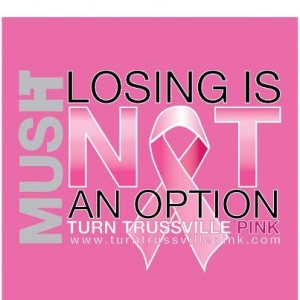 All over town, pink bows and balloons are displayed on the front doors of businesses, homes and churches throughout the community.

“Turn Trussville Pink” is a community-wide breast cancer awareness campaign held every year on the 3rd Wednesday in October that started small and has since raised thousands of dollars for breast cancer research.

According to turntrussvillepink.com, what is known today as “Turn Trussville Pink” got its roots in 2006, when Hewitt-Trussville High School sophomore Joshua White worked with DECA, a business and marketing student organization, to implement a project called “Turn Hewitt Pink.”

“The project honored two high school teachers in the midst of a battle against breast cancer,” according to the website. “DECA sold pink T-shirts and decorations as a school-wide fundraiser for breast cancer research. All proceeds from this sale benefited a fund that had been set up five years prior by Hewitt Elementary (now Paine Primary) teacher Kristy Stacks in 2001.”

The community has embraced this effort wholeheartedly.

Even local business are showing their support by offering special deals throughout the week.

Pink balloons are being given out at some local businesses for the community to help show support.

Waffle House on Chalkville Mountain Road is serving pink waffles all day
. Joel’s Restaurant is accepting donations in return for a piece of Joel and Peggy Riggins strawberry cake. Chick-fil-A is also showing support by serving pink lemonade all day.

To wrap up the day of awareness, some local churches are a dinner for the community. NorthPark Baptist Church, Trussville Methodist Church, Trussville First Baptist and Central Baptist are showing support by ending this special day in prayer, supporting those fighting this illness and remember those who have lost their battle with breast cancer. 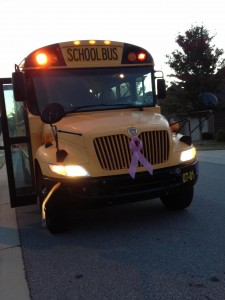