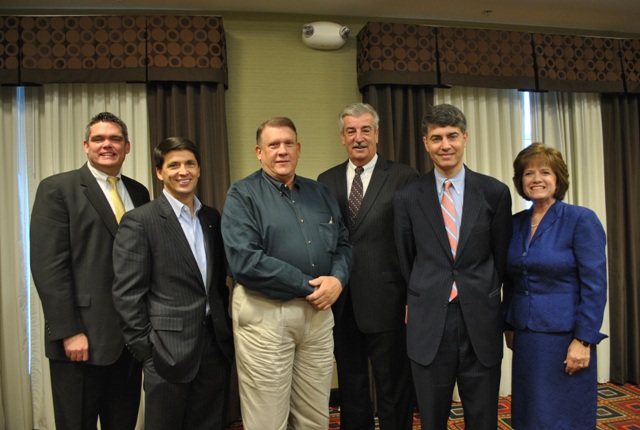 The Trussville Area Chamber of Commerce hosted a legislative breakfast on Thursday, November 1, at the Hilton Garden Inn in Trussville.  About 50 people attended the event.  Four area elected officials were invited to present updates to chamber members and guests in attendance.

Senator Blackwell briefly discussed some of the amendments on next Tuesday’s ballot, as well as licensing and regulation, and also “One Spot,” a bill unanimously passed last year which allows businesses to go online to pay sales taxes in one place instead of paying directly to each municipality.

Representative DeMarco also discussed some of the amendments affecting this area, and he recommended we continue the Bush tax cut act.  He also said cities are working to have the ability to sell car tags at each city hall.  “Let’s put the taxpayers first,” he said.  He also thanked Joe Knight and the Jefferson County Commission for taking a stand on Cooper Green Hospital
.

Commissioner Knight said the county had a $312M budget when this county commission was elected.  The occupational tax was eliminated soon after, and he said he agrees that “we don’t need it and we don’t need to fight over it.”  The Commission just balanced the 2013 budget in the amount of $190M.  They are working hard to get county spending under control.  He is excited about the county’s new finance director; this hire should greatly help the county’s financial position.  He added that Cooper Green will transition in-patient care to other hospitals.

Mayor Melton said the city council balanced the city’s 2013 budget at the first of October.  The budget includes $3M for capital projects, which are possible because of a one-cent increase in sales tax.  July saw a reduction in sales tax revenue probably due to the price of gas.  He said there is a direct correlation between gas prices and the amount of disposable income families have.  The city’s ad valorem tax is 5 mils, and he added that people would prefer to pay sales taxes over ad valorem taxes.  The proposed new football stadium project is on-hold because an Indian artifact was found on the site.  He is still hopeful that this project can be completed before the 2013 football season.  Finally, the mayor said that the downtown project related to the addition of a dedicated turn lane is on hold because both corners are historical resources, and we must go through ALDOT for approval. 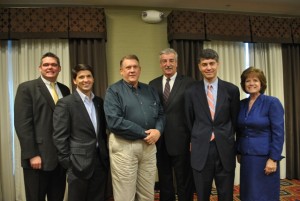