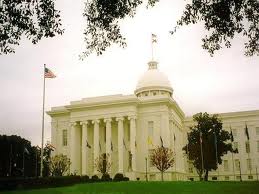 Alabama Rep. Paul DeMarco, R-Homewood, told a small group at a  Nov. 1 Trussville Area Chamber of Commerce group breakfast that he is in favor of making changes to the state constitution article by article. He said most believe it needs to be changed. Some groups have unsuccessfully lobbied for a totally new state constitution, citing not only the obsolete and segregation-language portions, but also the length and hundreds of amendments.

However, in DeMarco’s view, some parts do not need to be changed, such as the state’s borders and the requirement to balance the state’s expenditures with income — that is, balance the books.

One of the changes proposed for the Nov. 6 ballot is Amendment 4. Michael Ciamarra, policy adviser to Senate leader Jabbo Waggoner, told those at the breakfast that Amendment 4 will only remove the segregation language from the Alabama Constitution.

The ballot says it also removes wording referring to a poll tax.

The segregation language — still in the state’s constitution — says “separate schools shall be provided for white and colored children, and no child of any race shall be permitted to attend a school of the other race.”

While federal courts have ruled the segregation wording is not enforceable, it can only be removed from the Alabama Constitution through an amendment.

The proposed Amendment 4 sponsor, Sen. Arthur Orr, R-Decatur, is quoted in published reports as saying the segregation wording has hindered attracting business to Alabama when competing with other states.

Previous attempts to change the wording has brought in some complexity and resulting opposition, unlike the currently proposed Amendment 9 and 10, also intended to remove obsolete language.

In addition to the segregation wording, the 1901 Alabama Constitution in Section 256 said that the “legislature shall establish, organize, and maintain a liberal system of public schools throughout the state for the benefit of the children thereof between the ages of seven and 21 years.” It says funding is apportioned according to the number of students to provide “school terms of equal duration.”

But, the proposed Amendment 4 includes some wording from a 1956 Amendment 111, which has been challenged in the courts with portions being struck down.

Thus, if approved, in addition to removing the segregation language, Amendment 4 would have Section 256 say: “It is the policy of the state of Alabama to foster and promote the education of its citizens in a manner and extent consistent with its available resources and the willingness and ability of the individual student, but nothing in this Constitution shall be construed as creating or recognizing any right to education or training at public expense or as limiting the authority and duty of the legislature, in furthering or providing for education, to require or impose conditions or procedures deemed necessary to the preservation of peace and order.”

Ciamarra said the wording saying publicly funded education is not a right was kept in so as to prevent a debate at this time over taxes and how education is funded. Such a debate derailed voter approval of a 2004 amendment, which was also intended to removed the segregation language but also would have removed the wording of no “right to education or training at public expense.”

“There is no other purpose than to remove the segregation parts,” Ciamarra said in a later interview. “It’s sole intent and purpose is to remove that language.”

That’s why the Amendment 111 wording of the rest, although much of it not being enforced, is remaining in the proposed Amendment 4, he said. They figured just focusing on changing the segregation wording at this time would prevent litigation over whether education funding is equitable, Ciamarra said.

Next year, the Constitutional Revision Commission plans to address the education funding portions of the Alabama Constitution, which is a separate debate, Ciamarra said. “That’s a wholesome debate; we look forward to that debate,” he said.

State newspapers have published a letter to the editor from Henry Mabry, executive secretary of the Alabama Education Association. The letter says, “If Amendment 4 passes on Tuesday, then there will be no constitutional right for public schools in Alabama’s 111-year-old Constitution.” He said Amendment 4 is an attempt to take money from the schools.

Disputing the claims of a Republican hidden agenda, Ciamarra said it would be an “absurdity” for anyone, including Republicans, to try to do away with public education.

Numerous other state statutes and federal mandates that come with federal funding make sure the Alabama government provides public education, Ciammarra said. And the whole Alabama Department of Education is based on publicly funded education, he said.

One example Ciamarra referred to is the federal Title I Act, which has the purpose of ensuring “all children have a fair, equal, and significant opportunity to obtain high-quality education and reach.”

“The danger is that if this fails — and I don’t think it will — internationally, what does that say about Alabama?” said Ciamarra. “What kind of message will go around the world?”

Alabama Rep. Paul DeMarco, R-Homewood, a member of the state’s Constitutional Revision Commission, sponsored the bill that led to Amendment 9 being on the ballot on Nov. 6. He said the current Alabama Constitution is worded for just one form of a legal corporation. However, 11 currently exist, including limited liability corporations, non-profit corporations and more
. He said that the current wording also has references to regulating telegraphs, which means it is obsolete.

DeMarco also sponsored the bill that led to Amendment 10 being on the ballot. It would remove the gold standard for payments to banks,  eliminate the wording that allows banks to issue their own currency and remove the time limit of how long banks can exist.

However, according to a letter to the editor from Alabama Superintendent of Banks John D. Harrison, it keeps the wording that the state cannot own stock in or lend to a bank, which he said is good and would continue preventing the state from “bailing out” banks.