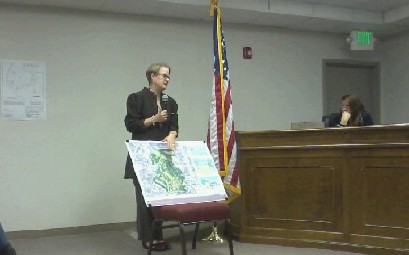 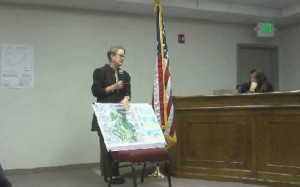 Thursday’s meeting of the Pinson City Council can best be described as a preview of things to come
. The most anticipated project discussed was the plan for a new city park to be built near Center Point Parkway between Sweeny Hollow Road and Glen Brook Road.

Jane Ross of landscape architecture firm Goodwyn, Mils & Cawood presented plans for the proposed park, which include a caretaker residence, a multiphase building for concessions, meetings  and dressing areas, numerous walking trails, a creek side boardwalk, an amphitheater, a splash pad, a dog park and a frisbee golf course.

The project is designed in such a way that the various components can be phased in to the 20 acre area over time. According to Ross, each aspect will be assigned a cost so the city may prioritize based on funding available.

“If you have a budget, we can show you what might be done for that budget,” Ross said.

A preexisting house on the property will serve as living quarters and office to a   live-in caretaker. Mayor Hoyt Sanders suggested making this house livable for caretaker use should be the city’s first consideration.

Other plans for the future include the acquisition of portable bleachers for the Pinson Valley Youth Association as well as the acquisition of surplus vehicles and equipment for city use. The city recently purchased a military transport truck for use and is looking to replace several SUV’s and trucks that are beginning to show their age.

Other road and construction equipment is also being looked into. The city is also looking to an alternative to relying on Jefferson County for roadside mowing. According to Sanders the County has become unreliable and several areas have reached such a stage of growth that they have become a safety issue for drivers.

Other plans for the future focus on communication. Due to Pinson’s new rules for transparency the city website will have to be upgraded to accommodate all the additional information. According to Sanders the current site uses a proprietary coding that does not allow for easy expansion. Any new system would use a more off-the-shelf software that allows for ease of use as well as easy expansion.

Freshman councilman Robbie Roberts is also volunteering to look into digital tablet technology as a way to make council meetings and projects paperless. Roberts is looking into a Microsoft-based system that should be compatible with all current software in use. If this endeavor proves feasible, the council expects to adopt the tablets within the next year.

The city also adopted a new communications policy naming the mayor as spokesman and coordinator of any future emergency efforts as well as the media liaison. This gives the mayor the power to be the sole communicator with media outlets in times of crises, allows him to call for and coordinate volunteer efforts, allows the establishment of donation centers for relief supplies, authorize and use city funds and resources for aid, and coordinate with EMA or other emergency services. Under the previous method an emergency meeting was needed before efforts could be coordinated.

This comes in light of the tragic deaths of a father and son who were struck by a car and killed Friday night  after the Pinson Valley Football game.