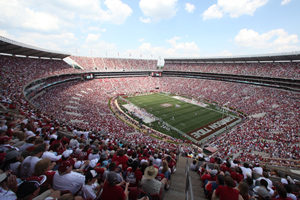 Bama is back in the hunt for BCS Championship

The Crimson Tide is back in the hunt for the BCS Championship after top ranked Kansas State and second ranked Oregon were both upset on Saturday night.

Alabama, which spent most of the season as the nation’s number one team,

fell to fourth in the rankings after losing to Texas A&M.

The Tuscaloosa News reports there is still work to do for Bama before they can defend their 2011 national title. You can read Chase Goodbread’s article here.

Alabama must face rival Auburn in Tuscaloosa on Saturday. A Bama win would pit the Tide against SEC East champion Georgia with a likely berth in the 2012 BCS Championship Game at stake
.