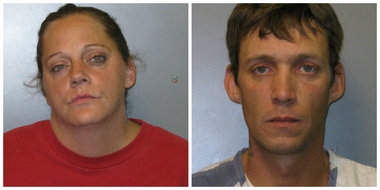 Authorities have arrested 34-year old Pinson resident Amanda Leigh Chalmers for receiving stolen property after Chalmers she her boyfriend, 36-year-old Michael Waldrop stole a car battery and then recycled it.

Authorities have arrested 34-year-old Pinson resident Amanda Leigh Chalmers for receiving stolen property after Chalmers and her boyfriend, 36-year-old Michael Waldrop, stole a car battery and then recycled it. 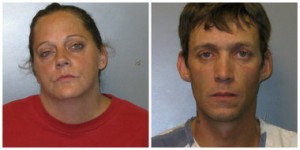 Jefferson County Chief  Deputy Randy Christian says the incidents began around 6:30 a.m. Tuesday, as deputies were called to the 9200 block of Old Tennessee Pike to investigate a report of a car break in.

“The victim told authorities that someone had stolen the battery from his 1988 Toyota pickup truck,” Christian said.

It was reported that he victim showed deputies photos that were taken by outdoor security cameras on his property. The photos allegedly showed a white male and white female stealing the battery.  Police say the male could be seen carrying the battery away from the residence.
Reports indicate that the investigation led deputies to a nearby recycling center, where it was confirmed the pair had recycled the battery.

“The pair had brought the battery to the recyclers,” Christian said. “A  photo of the female was made by the recyclers at the time of the transaction.”

Authorities confirmed that Chalmers and Waldrop had recently been seen at the recycling center. Authorities say Chalmers was still wearing the same clothes as seen in the photos from the residence. Authorities were able to locate Chalmers and she was questioned about the theft.

“An address was obtained and deputies went to locate her. She was found asleep in a car in the driveway of a residence on Patty Lane in Pinson,” Christian said.

Reports indicate once Chalmers was shown the photos of the theft in progress, she admitted that she and her boyfriend had stolen the battery. She also told deputies that she believed Waldrop was on his way to burglarize a specific area residence.

Following the lead, deputies went to the location, but did not find Waldrop
. Reports say that Chalmers received a text from Waldrop saying he was at her home. Deputies located him at the home and arrested him.
Michael Waldrop, of Pleasant Grove, is charged with unlawful breaking and entering a motor vehicle and theft of property third degree. He is currently in the Jefferson County Jail with bonds totaling ,000.
Amanda Chalmers is charged with receiving stolen property. She is currently in the Jefferson County Jail with ,000 bond.