TRUSSVILLE — Clay-Chalkville and Hewitt-Trussville are likely saving the best for last.

Clay-Chalkville head football coach Jerry Hood said today that there’s a “gentleman’s agreement” that the rivals will play each other the final week of the season.

Clay-Chalkville is now in Class 6A, Region 6, while Hewitt-Trussville is in Class 7A, Region 3. The new classifications were announced Wednesday.

Hood said he expects that game to be agreed upon “in principle” Thursday.

“Hopefully we will, and we can continue that great rivalry,” Hood said.

Hewitt-Trussville head football coach Hal Riddle said he and Hood are looking at the possibility of playing in the final week of the season. 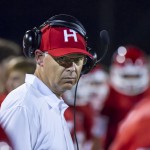 “We both wanted to play,” Riddle said.

Clay-Chalkville leads the all-time series against Hewitt-Trussville, 11-6. The teams have faced off in the last week of the regular season just twice in the rivalry’s history, in 1998 and 1999. The teams have played each other in the opening game the past two seasons.