Trussville Police Department Lt. Jeff Bridges said two white males kicked in a side door at a home where the homeowner was sitting on her deck. 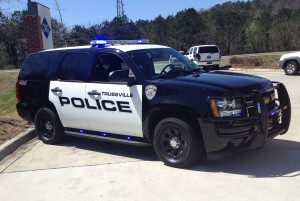 Bridges said the alleged burglars and the homeowner saw each other inside the house, and the two fled in a dark SUV.

Nothing was taken in the alleged burglary, Bridges said. He said the two got away for now.