TRUSSVILLE — A photo making the rounds on social media of a young man making an obscene gesture in a Trussville police SUV appears to be photoshopped, according to a statement posted by the Trussville Police Department on its Facebook page. 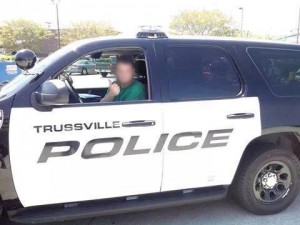 The photo had been shared on the Facebook page of a Birmingham television station and had popped up in several social media groups as well.

The statement thanked the public for notifying the department and wanted to “assure you that the young man is not a police officer with our department and that it appears the photograph has been photoshopped.”

Department officials urged anyone with information related to the origin of the picture to contact them at 205-655-2101.

Publisher’s note: We chose to blur the obscene gesture and the individual’s face because the origin of the photo is not known at this time.