LATEST NEWS
Home Weld for Birmingham Thrown under the bus 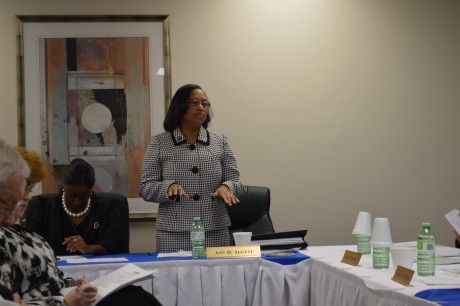 Thrown under the bus

Transit Authority Executive Director Ann August said at a special called meeting Monday that if action was not taken by the board to remove Lassiter as chair, she would hand in her resignation. Photo by Cody Owens.

After the executive director of the Birmingham-Jefferson County Transit Authority threatened to resign if board chair Johnnye Lassiter was allowed to continue interfering in the performance of her duties, the board Monday voted to remove Lassiter from her post.

That development, at a special called meeting, brought to a head a simmering high-stakes power struggle between Lassiter and BJCTA Executive Director Ann August that has been playing out for several months.

During the meeting, August said that if she is not provided the freedom of communicating with the board of directors and contract vendors as well as the ability to manage day-today operations with the agency without the integrity of her senior staff being called into question by Lassiter, she would “have no other choice than to present the board of directors with my letter of resignation.”

BJCTA board member Reginald Jeter then made a motion to remove Lassiter from her position, which the board approved 6-2 before appointing Patrick Sellers to the chair position.

The decision was followed by applause from the 50 or so people who crammed into the boardroom to see how the situation would be resolved.

The two votes to keep Lassiter came from Patricia Henderson and Lassiter herself. Bacarra Mauldin, who serves as an executive assistant to Mayor William Bell, voted to remove Lassiter, but would not comment after the meeting as to why she voted yes.

This decision comes on the heels of accusations that Lassiter had repeatedly encroached on August’s authority and hindered her capabilities to manage her staff, thus limiting her ability to make improvements to Birmingham’s beleaguered transit system. On top of that, August claimed Lassiter withheld information from board members and made decisions without public notice.

At the meeting, August outlined some of these instances in a memorandum that she read to the board members and the crowded room of bus drivers, bus riders, citizens and politicians alike.

August claimed that over the last several months, she and her staff have been “subjected to interference by the board chair in our day-to-day duties in running the agency.”

She went on to say, “I have been directed to fire staff, demote staff, and/or reassign staff with the understanding that my employment may hinge on me taking these actions. The chair has contacted staff, held meetings with staff, and directed staff regarding day-to-day duties without my knowledge or my authorization.

“Riders’ complaints have been directed by another board member to the board chair and first brought up at a public board meeting. As the executive director, all internal customer [personnel] and external customer [passenger/community] related questions are to be directed to me first — not the board chair — to allow me the ability to research or explain the situation before making it a public matter,” August continued.

Another issue that was discussed — and one that perhaps brought the disputes between August and Lassiter to light — was last month’s decision by the Homewood City Council to cut the funding for the BJCTA in half when crafting the city’s 2015 budget.

Cedric Hatcher said at Monday’s meeting, “A city divided will not stand. Not everyone can be the head, and without the head, the body will be dysfunctional,” referring to the recent tensions between Lassiter and August. Photo by Cody Owens.

After initially cutting the funding for MAX — which was set to disrupt bus services to Homewood beginning Dec. 22 — the Homewood City Council voted on Dec. 15 to fund the bus services through the end of January, allowing the BJCTA time to come up with a long-term solution.

“As soon as we know and can get a time, we will be ready to meet with Homewood and find out what their intentions are,” Lassiter said.

Lassiter quickly thanked Edwards for his observation and tried to move onto another subject.

As August pointed out, “At the Dec. 19 special called meeting [Lassiter] stated that it was my decision to stop the Homewood service on Dec. 22. That was a decision that was made by the chair. In fact, my staff and I cautioned against making changes without public notice and suggested that Jan. 5 would be a more appropriate date due to the fact that it was the scheduled day operators picked new routes.”

The situation that occurred with Homewood’s bus service may be emblematic of a larger problem faced by the BJCTA: the lack of communication and cooperation between MAX and the surrounding suburbs.

“I think it’s important that we keep strong customer relations with our cities and they need to know they are getting something of value,” said BJCTA board member Adam Snyder. “I’m hoping we can continue to work with Homewood and find a solution.

“The problem is, the way we are funded and the way we are structured, a bunch of different cities have their own contract. None of our routes go into one city, except maybe the DART downtown. They go in and out of different cities. So if you cut off or reduce service to one city, it’s going to affect a bunch of others. That’s just a fundamental problem that we have in our funding structure,” Snyder continued.

However he remains confident that a solution — one that is mutually beneficial for the city of Homewood the BJCTA and those who rely on the bus services — can be reached before the end of the month, when services are scheduled to be discontinued.

When August arrived in Birmingham in 2013, she brought with her a wave of optimism about the future of public transportation in Birmingham. Bus riders, transportation advocates and transit employees have held August in high regard since she was appointed as the executive director of the BJCTA — a position held by 10 people in the last 20 years, according to a MAX employee at Monday’s meeting.

“I’m here to relay to the board our support for the executive director,” J.O. Hill said at Monday’s meeting. “I’ve spent most of my life with this company and it’s been a good company to work for. [August] has been wonderful for this company. She’s changed the morale of this company. When she came there were tears of joy.

“We started out with a motto, ‘One Team, One Goal.’ And when August came she gave herself a new name. She called herself a coach. A team has to have a coach and I’m here to say, the team is here, coach,” Hill said.

However, August said over the last several months, her ability to manage her team has been severely undermined by the board chair.

As August put it, “I did not come to Birmingham to bring harm to the employees, the board of directors, customers, agency or the community at large. I came here to work in a professional environment, in cooperation with the board of directors, employees and the community. In addition, I also did not come here to have my character and integrity questioned, or my 34 years’-plus reputation in the transit industry ruined because of actions of others.”

Johnnye Lassiter mentioned after the meeting that there would be consequences for the board’s decision to remove her as chair, but she would not elaborate as to what those consequences may be. Photo by Cody Owens.

“[August] stood up for all of us today,” Rev. Lawton Higgs said. Higgs, along with several dozen more public transportation advocates, attended the meeting to show support for August, whom Higgs said has done “tremendous things for the people of this city who ride the bus every day.”

After the dust settled at Monday’s meeting, August was asked what the biggest obstacle for her will be with the changing of the guard on the board of directors.

She answered succinctly, “Hopefully, not retaliation.”

Lassiter, however, said that there will be consequences for Monday’s vote, although when asked specifically what these consequences may be, she would not elaborate.

“When people’s minds are made up, I don’t try and change them,” Lassiter said to reporters after the meeting. “This was a decision by the board. There are consequences to every decision that is made. Just watch it, there is going to be consequences to this decision.”

What does removing Lassiter from her position as chair mean for the remaining board members? “For the agency this means we can get back to doing business,” Snyder said. “I think it was unfortunate that it came to this. I thought there were a lot of efforts to try and prevent this behind the scenes, but we are moving on. … I don’t want to look to the past, I want to look to the future.”

On the other hand, Higgs, a volunteer organizer for the Birmingham Bus Riders, said that looking back at the history of public transportation in Alabama is important. Otherwise, leaders “are bound to make the same mistakes.”

Higgs said that what is happening with the funding cuts to MAX is part of a larger issue, categorizing the recent events as “an attack on the gains made in Alabama during the Civil Rights Movement.

“In other words, it’s not by chance that people are wanting to pull funding out of public transit. To borrow a phrase from recent demonstrations, black lives still don’t matter to white men in power,” Higgs said. According to Higgs, by cutting funding to public transportation, the white power structure is systematically reducing the power of the minority votes in Alabama.

After she was arrested for refusing to give up her seat, Rosa Parks later said that, “It was not prearranged. It just happened that the driver made a demand and I just didn’t feel like obeying his demand. I was quite tired after spending a whole day working.”

Higgs said this was one of the most important moments in Alabama’s history. Parks was just trying to get home from work, not unlike those who ride the bus in Birmingham today.

“We have the most gifted, powerful and beautiful black women on this board because Rosa Parks sat down. When 60 years has passed, what will your legacy be?” Higgs asked, directing his question to the BJCTA board members during the meeting. “How will you all be remembered?”

At the meeting Monday, an outspoken advocate for public transit, John Wright Jr., cast the management of the community’s bus system as more than an issue of who runs day-to-day operations at MAX. “When we solve the transit problem in Birmingham,” Wright said, “we will solve a lot of problems. It’s time we started loving each other like human beings.”