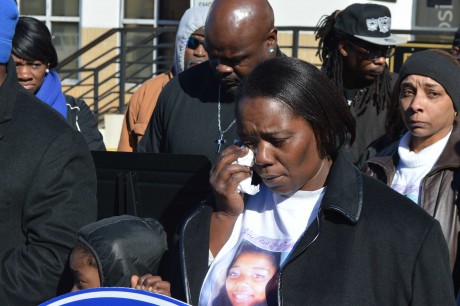 Answers locked in a jail cell

Sheneque Proctor’s mother, Scherita Proctor, wipes away tears after addressing the crowd gathered in front of the Bessemer City Jail on Jan. 10. Photo by Cody Owens.

Scherita Proctor spoke with her daughter after she was arrested in Bessemer on the night of Nov. 1, 2014. About 12 hours later, Sheneque Proctor, an 18-year-old Brighton woman, was found dead in her jail cell at the Bessemer City Jail. Two months later, the Proctor family is still demanding answers about the circumstances surrounding her death.

“I talked to my daughter. She was crying. She was upset. So it’s hard for me to believe that 12 hours later she’s dead,” Proctor said at a rally in front of the Bessemer City Jail on Jan. 10. She said that after she was arrested, Proctor called her mother from jail and told her that the police had been rough with her after her hands slipped out of her handcuffs. But she did not mention being pepper sprayed.

“If she had been sprayed with pepper spray she would have told me. She was sprayed after she talked to me. That much I know and that much I believe,” Proctor said, trying in vain to hold back her tears. Her family, who said Sheneque suffered from asthma, believes the police negligently sprayed her with mace after she had been brought into the jail, leading to an asthma attack that killed her.

Proctor was arrested for disorderly conduct, resisting arrest and harassment during a party at the Economy Inn in Bessemer. During her arrest, she was also charged with possession of marijuana.

The Jefferson County Coroner’s Office released Proctor’s autopsy report last month. According to the toxicology report, Proctor died from “complications of polydrug overdose.” The report states that Proctor had methadone, cocaine and alprazolam in her system at the time of death. However, marijuana, which was the only drug in Proctor’s possession during her arrest, did not show up in the toxicology screening.

When asked about this, Phillip Russell, a representative with the Jefferson County Coroner’s Office, said that sometimes marijuana will not show up in a toxicology test.

“I will say this: our toxicologist says that with marijuana, sometimes it shows up and sometimes it doesn’t. It might just depend on how much you use it,” Russell said.  “If you go home and take a couple puffs off a joint, it might not show up. But if you are using it frequently, it will probably show up.”

Proctor’s family insists that there is no way she could have died from a drug overdose after being in police custody overnight. They also wonder why none of the drugs found in her system were in her possession when she was arrested.

After her arrest, Proctor called her mother from jail. Scherita Proctor did not immediately have the money to post her bail. “She told me that the three police officers had slapped her against the police car and threw her in the back seat. So if she told me that, I’m pretty sure she would’ve told me that she was sprayed with pepper spray,” Proctor said.

On Saturday, several dozen people gathered in front of the Bessemer City Jail after marching from nearby DeBardeleben Park to rally in support of the Proctor family. Several friends and family members spoke during the rally and demanded answers from the Bessemer Police Department.

Sheneque’s uncle, Mohammed Proctor, said that something is wrong with the picture painted by the Bessemer Police Department and that their explanation does not add up. “We’ve tried to give the police department the respect that they deserve, but there is no respect given back to us,” he said.

It took almost two months for the family to receive a copy of the police report from the Bessemer Police Department, and according to family members, authorities have refused to sit down and talk to the Proctor family.

“We’re not just going to take their explanation of a drug overdose and say that’s what happened. How are you going to overdose 12 hours later after you’ve been arrested? You can’t. … She was going to die when she got here if it really was a drug overdose,” he said.

“I’ve been in this precinct,” he continued. “I know the conditions of this precinct. It’s nasty. I used to feed rats on the floor. My mind keeps wandering to the question of, did she suffer? What was really going on in this jail that night?”

Authorities in Bessemer have declined to comment on Proctor’s death. A lawyer representing the family has indicated that the Bessemer Police Department has refused to release surveillance video from the jail. The contents of the video are unknown, but family members believe it may be the key to finding out what really happened to Sheneque.

Two young boys hold up a sign for the National Association for the Advancement of Colored People (NAACP). Photo by Cody Owens.

Bernard Simelton, the president of the Alabama State Conference of the National Association of the Advancement of Colored People (NAACP), said that their organization, along with the Proctor family, will continue to demand answers from the Bessemer Police Department until the video is released.

“The loss of a loved one is always devastating to a family. It’s particularly devastating when they had just graduated from high school and looking forward to starting the next chapter of her life,” Simelton said while standing in front of the jail.

Sheneque left behind a 5-month-old son, Zamaruien Blevins, and, according to her family, was looking forward to entering into nursing school.

“The answers to our questions lie within the walls of this city jail,” Simelton said, gesturing to the building behind him. “The family of Sheneque Proctor and the NAACP on numerous occasions have come here seeking to speak with someone that can answer our questions. The response was, they are not available. The untimely death of Sheneque Proctor is on the hands of the Bessemer Police Department and all the officers that wear their badge.”

Simelton called on Bessemer Police Chief Nathaniel Rutledge and city officials to sit down and talk with the Proctor family.

After repeated efforts, calls and messages left for Bessemer Mayor Kenneth Gulley, he has been unreachable for comment.

Proctor’s death comes amid widespread protests over the deaths of unarmed black men Michael Brown and Eric Garner at the hands of police officers. Just before the rally on Saturday, a petition on change.org for a federal and state investigation into Proctor’s mysterious death reached its goal of 10,000 signatures.

However, the state has already launched an investigation into Proctor’s death according to Jeff Rotenberry, a representative with the State Bureau of Investigations.

“We’re currently in the final phases of our investigation. Once we complete that, we will send our findings to Montgomery and the District Attorney’s office,” Rotenberry said. He said that should happen in the next several weeks.

“Part of the holdup was waiting for the coroner’s office to release their report. Now that we have that, it shouldn’t be too much longer,” Rotenberry said.

As for the NAACP, which has been heavily involved in the case, “The next step will be to get answers from the police chief and get that video. If we have to go to court, then we will fight them there,” Simelton said. “We will share [the petition] with the chief, with the mayor and with the state of Alabama, and show them that young, black lives do matter. And not just to people in this community, but across this country.”

As the news of what happened to Sheneque Proctor gains traction, even garnering attention from U.K.-based publication The Guardian, her family hopes state and local officials will launch a full investigation into the behavior of the BPD in the months that have followed her death.

Surrounded by dozens of sad faces chanting “We want to know,” Scherita Proctor said, “This just shows that a lot of people cared about her. She was lovely and always helped everybody she could. But I know she was crying out for help that night. And nobody came to help her.”