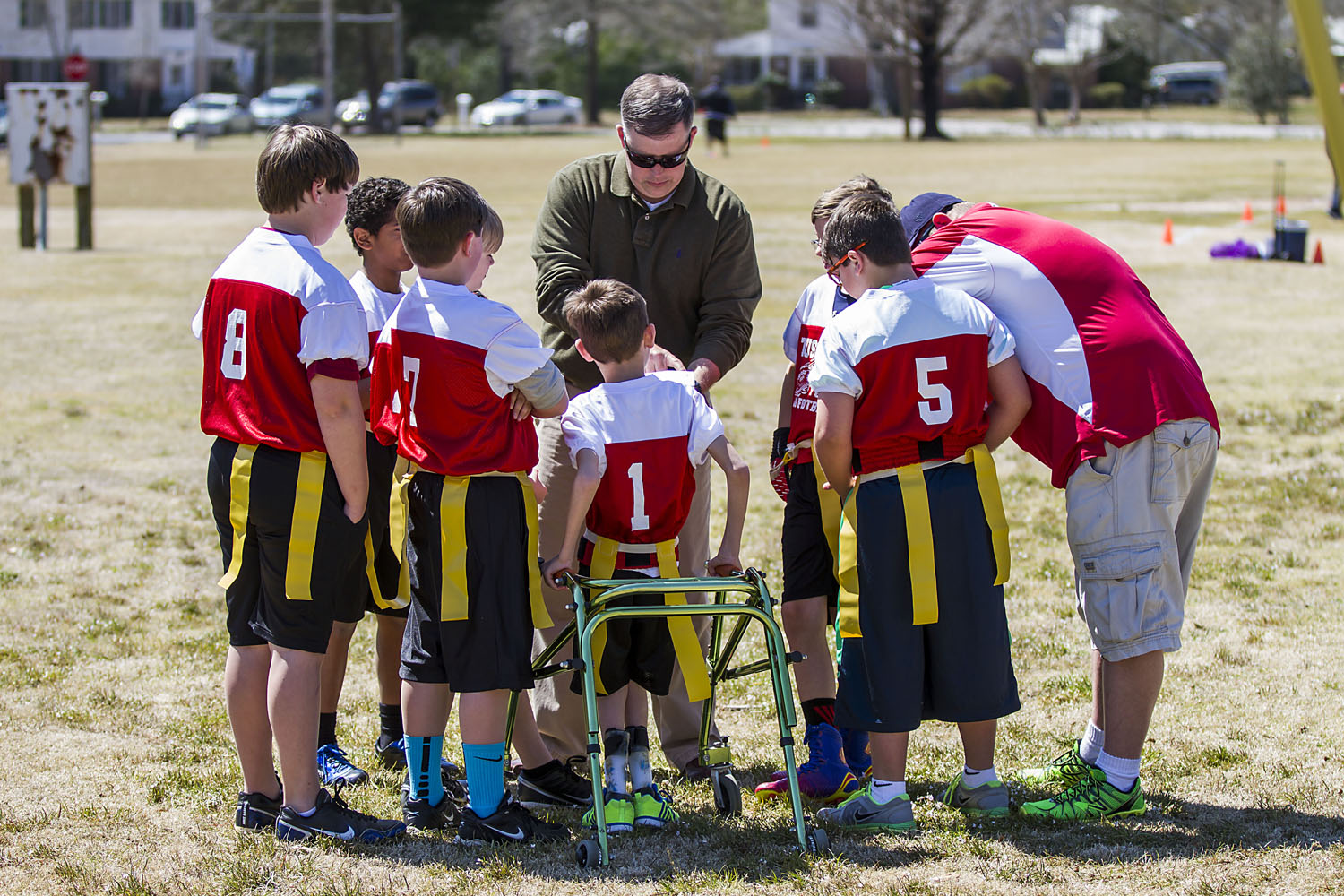 Coach Kenneth Hardin draws up a play for the Trussville Youth Flag Football Redskins, a Trussville Parks and Recreation team, in the spring of 2014. file photo by Ron Burkett

‘It means the world to me,’ director says

TRUSSVILLE — A five-year-old dream has become reality, and kids who live in Trussville will start seeing the rewards this year.

Guttery, who’s coached recreation league basketball for 13 years, saw the city’s departmental budgets decrease dramatically after the Great Recession. Kids in the flag football league were told to obtain T-shirts with press-on letters since there wasn’t enough money for NFL replica jerseys. Basketball kids were to do without a postseason tournament for the same reason.

Guttery ventured out into the corporate community and secured $250 each from 12 businesses so that the basketball league could have a postseason. At the time, Guttery felt a foundation to which individuals and businesses could make annual, tax-deductible contributions would be a great idea.

“They’re only kids once,” Guttery said. “To me, economic hardship even befell the kids, as they were asked to participate in meeting budget shortfalls by doing without jerseys and tournaments, and this didn’t sit well with me at all.”

In the aftermath of the Great Recession, Guttery was made aware of children who didn’t participate in basketball for economic reasons — parents losing jobs, parents getting divorced, incurring fees for the sports. 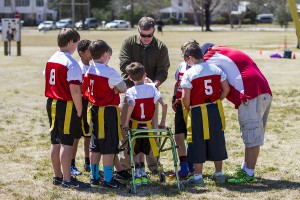 Coach Kenneth Hardin draws up a play for the Trussville Youth Flag Football Redskins, a Trussville Parks and Recreation team, in the spring of 2014.
file photo by Ron Burkett

“This breaks my heart,” Guttery said. “Over 13 years of coaching basketball, I can tell you that participation in such offerings is beneficial to the physical, emotional and social development of children. Its is a privilege of the highest order to be a center of influence in their lives for a few months, knowing that what we’re doing isn’t just about playing basketball, but more so about learning life lessons upon which they’ll draw well into their adulthood.”

Guttery said he thought that if a foundation was established to offer economic support in the form of scholarships for youth that might not otherwise have the chance to participate, it was a great idea.

The foundation was then born in November as a 501(c)(3) organization. By the end of 2014, the foundation had received contributions totaling $1,925 from individuals, and one matching gift from Ameritas.

“With anything in life — professionally or personally — if I’m going to commit to doing something, then it must be something about which I can muster passion,” Guttery said. “I’m going to give it 100 percent or nothing. Coaching these kids is one of the most meaningful and rewarding avocations that I have, and being the director of this foundation is a natural extension of that avocation. It means the world to me, and I can’t wait for the day when the foundation can disburse scholarships and help to make it possible for any child who wishes to participate in athletic offerings through Trussville Parks and Recreation to do so.”

Guttery said he expects the foundation to make its first scholarship distributions this fall, likely coinciding with registration for flag football. The foundation serves kids of all ages in Trussville Parks and Recreation offerings, including basketball, flag football and gymnastics. Soccer, baseball, football and lacrosse each have their own associations.

The foundation will determine the total number of participants in each sport in order to arrive at a pro-rata split for contributions. If residual funds remain for a given sport once scholarships are awarded, then the foundation will work with Parks and Recreation to determine what other needs may be met with the funds.

Guttery said a website and social media pages are being developed. For more information, email trysfoundation1@gmail.com or call Guttery at 205-223-4356.

“For the community, this can only be a huge positive,” Guttery said. “All thriving municipalities have a growing and prosperous recreation department. As Trussville has grown, we on the Park Board are perpetually dealing with lack of adequate field and gym space to accommodate the vast and growing number of kids who participate in athletic offerings. This is a good problem. My dream is that the foundation can make it possible for even greater participation in these offerings.”