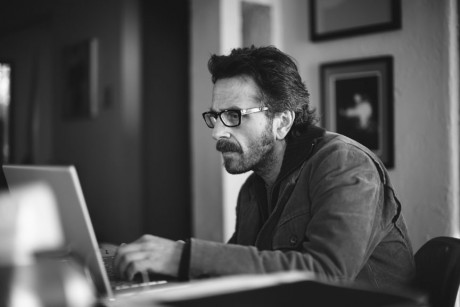 I look forward to hearing Marc Maron’s voice every week. The 51-year-old comedian hosts a weekly podcast, entitled WTF, that makes me yearn for the days when you didn’t have to subscribe to anything to hear interesting people converse.

Though briefly a talk show host on the now-defunct Air America radio network, Maron has been earning his daily bread since 1987 as a stage performer of observational humor. The fact that you likely don’t know him as a stand-up comic indicates how well that part of his professional life has gone. Working in the wake of comics such as Lenny Bruce, George Carlin and Bill Hicks, Maron had trouble getting over to mass audiences, winning instead the career-squashing title of “comedian’s comedian.”

Like many comics, Maron has struggled with alcoholism, drugs and mental depression. Clean and sober now, the funny man was in a very unfunny place when he started podcasting in 2009. He was broke, divorced and thought about using the garage in back of his Los Angeles house as a place to stage his suicide. Instead, he set up the space as a makeshift studio and began recording long-form conversations with his fellow comedians for internet distribution.

Maron is no Terry Gross. His interviews probe deeply below the surfaces of his and his guests’ lives, more akin to confessionals than Q-and-A. (Fellow comic Louis C.K. was famously brought to tears during his 2010 visit, which Slate recently put at the top of its list of “The 25 Best Podcasts Ever.”

He’s doing something right. The WTF series has passed over 500 shows recorded and has logged over 100 million downloads. Though Maron talks with people in all aspects of show business now, his conversations with fellow comedians still intrigue me the most, and I paid special attention recently when he brought on Judd Apatow (Anchorman, Bridesmaids, Girls) to discuss the problems of The Coz, a situation the superstar comedy director and producer called “the saddest, most bizarre, in a way, Shakespearean episode that’s ever happened in show business.”

Bill Cosby was an American success story, starting off in the early 1960s telling jokes in New York clubs to help pay his tuition at Temple University, becoming a star through a series of best-selling comedy albums, jumping to TV in 1965 as the first African-American co-star of a drama series in I Spy, and ultimately becoming fantastically rich through the success of his network situation comedy, The Cosby Show, in the 1980s.

On that show, Cosby played the part of an all-American dad, but his real life may have been significantly more complicated. In 1997, court testimony revealed that he had had an extramarital affair in the 1970s. Other accounts of infidelity followed, then more troubling ones, similar allegations from a growing number of women who say that the comedian encountered them, drugged them and sexually assaulted them.

Cosby is certainly not the first star accused of reprehensible behavior; only a year ago, Woody Allen’s adopted daughter alleged that he molested her when she was a child. However, where Allen has continued to ply his trade as a filmmaker (and just signed a deal with Amazon to write and direct a TV series), Cosby has experienced sanctions of a sort, with Netflix indefinitely postponing a live concert special, TV Land pulling its re-runs of The Cosby Show and NBC withdrawing from a deal to create a new situation comedy with him.

[An aside. NBC’s entertainment chairman told an industry gathering last week, as reported in Entertainment Weekly, “While over the years we heard some of those accusations…it didn’t seem to be the thing that was critical mass. When we realized there seemed to be so much more of it, it wasn’t something where we could go, ‘Oh, we’re not sure.’” He did not estimate exactly how many disturbing allegations of assault might represent critical mass in blowing up a development deal with a giant entertainment conglomerate.]

Refusing to address the allegations (save for a two-sentence statement to the New York Post in December), Cosby has continued to fulfill his schedule of performances, which sparked the podcast conversation between Maron and Apatow. Maron, who had not commented on the situation previously, said, “It’s very strange the feelings you have around coming to realize that somebody you’ve respected…is a sociopathic monster.” He objected specifically to Cosby joking at a Canadian performance that a woman leaving her seat to run to the bar should “be careful — don’t drink that around me.”

“Using the platform of stand-up comedy to…trivialize what he’s playing off as empty accusations is heinous,” Maron said. “Can I still say, well, he did some great comedy, but he’s this horrible rapist monster? Can I compartmentalize that? I don’t know.”

Apatow had no such conflicts. “I absolutely would like to see him in jail. That’s where people who commit sexual assaults go,” he said. “You just don’t want him having a blast, that’s how I look at it. I don’t want him running around getting standing ovations. At the very least, go in your mansion and disappear for the rest of your life. He shouldn’t be rewarded and applauded for raping that many women.”

Bill Cosby has entertained in the Magic City frequently, often on behalf of organizations such as Miles College and the United Negro College Fund, but I have scoured the Birmingham Times website in vain for local African-American commentary on The Coz. Judd Apatow, though, is not shy about sharing: “Yes, he did things that were very important in the Civil Rights Struggle, and he did great things. But he also did some things that were as evil as you can do on earth. There’s a lot of great people who fight for civil rights, and we don’t need him. We don’t need his legacy. There are a lot of other people we can look up to.”