LATEST NEWS
Home Weld for Birmingham In the details 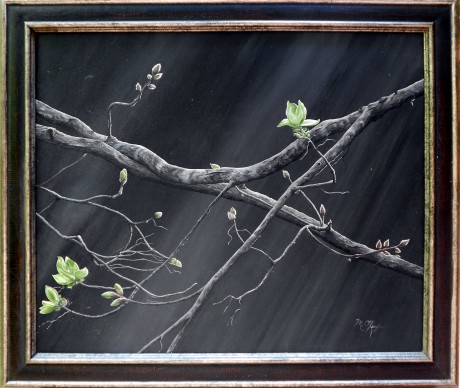 Image courtesy of the artist.

For Melanie O’Keefe, details are everything. The local artist has impressed several members of Birmingham’s artistic community with her intricately detailed acrylic portraits. O’Keefe usually does landscapes but has stretched her abilities to personal portraits as well.

But no matter the style, all of O’Keefe’s paintings have one thing in common: her intense attention to the most minor of details. “For some people, that much detail would drive them insane but I absolutely love it. It takes me a long time, but I just love it,” says O’Keefe.

O’Keefe, who moved to Birmingham from Atlanta with her family in 1998, says that she always loved drawing, but didn’t decide to pursue it until later in life. “I went to the American College Design School in Atlanta, and that’s really where I found that drawing could be more than a hobby,” she says.

At American College O’Keefe learned several tricks of the trade that she still uses to this day. “Drafting really taught me the most about drawing. See, we drafted then because we didn’t have computers and it really showed me how to do perspective and spatial relationships and measurements.”

After going to work for an interior design firm that specialized in hotels, O’Keefe found little time for her recreational artistic talents. Then, seven years ago, she began to paint. “I’ve never had a painting class, so it was mainly an experiment to see if I could even do it. I mainly learned from experience and figured everything out for myself.” Even as a beginner, she found people liked her work. “I did a lot of murals for the Oak Mountain Presbyterian Church. And I’ve done quite a few logos for small companies,” she says.

Although O’Keefe has been showing her work for over a year, in the last six months, she’s started taking it more seriously. “There’s this annual art show in Trussville and the people on the committee for that saw my work on Facebook and contacted me,” she says. “It was really heartwarming and meant a lot that people noticed my work.”

In 2014, O’Keefe submitted her work to the Moss Rock Festival in Hoover and became further inspired. “I received a pretty good response from most of the people there, so I thought, ‘Why not try and get my name out there more?’” she says.

She launched a website, which expanded her marketing into the digital world. “You can buy all of my work on my website,” she says. “I really want to get my name out into the community because I want people to see my work and appreciate it.”

Image courtesy of the artist.

At this point in her life, painting has taken over her entire agenda, she admits. “Ever since my kids left the house I’ve been painting like a fool,” she says with a laugh. “I love it. I get up at around three o’clock in the morning when no one else is awake — I love it because it’s quiet and no one is up to bother me — and I just start painting. And I don’t stop until that evening or later. I just get so wrapped up in it.”

O’Keefe started painting the nature portraits that have made her so popular when she and her family lived across the street from an inspiring landscape. “I was out for a walk and I noticed the way all of the trees were placed together and the way the light hit everything so well and I thought, ‘That would make a great picture.’ So I took a picture of it and went home and started painting the photo I took. That one took me about six months to finish,” she recalls.

It often takes her longer than she expects to finish, mainly because she obsesses over displaying every detail. “Right now I’m working on this really gnarly bark tree and I’m not skimping on any details,” she says. “Yesterday I worked on it for, I believe, 12 hours. But overall I spend on average about two weeks on my work.”

That detail is why her paintings captivate, she says. “I have people look at my work and they go, ‘That’s not a painting! That’s a portrait!’ They’re just so blown away by how much I care about the details. … A lot of people like the more contemporary and abstract artwork because it’s the mainstream thing right now. But I simply cannot do that. I couldn’t do it if my life depended upon it. I just don’t see things that way. I see every little detail, every little shadow. I love the way light hits an object. I always try to do things where there’s a lot of light so you can see all of the shading and contrast.”

When it comes to support, O’Keefe definitely isn’t in short supply. “My husband set up my website and my sons are very proud of me. They do occasionally rag on me for how into the details I am but I just explain to them that anything else just isn’t my style.” O’Keefe’s friends are also supporting her artistic career. “I have a few people who are regularly asking me what I’m working on next and quite a few people who have commissioned my work,” she says. “Everyone has been so supportive and shown great respect for what I’m doing.”

O’Keefe plans on expanding her career horizons as much as possible. “We’re [my husband and I] are always looking for new marketing tools to get my work out there. The sky is the limit, really,” she says.

In March, by invitation of the Vestavia Hills Art Show committee, O’Keefe will showcase her work in their upcoming show. “I’m really excited for people to see some of the new things I’m working on,” she says. “I hope that showing my work in Vestavia’s art show will introduce a lot of new people to my work.”

Melanie O’Keefe’s artwork is available at her webpage, mokeefeart.com. The Vestavia Hills Art Show is scheduled for March 21.