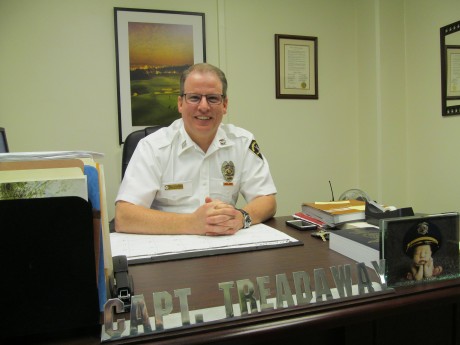 Birmingham Police Captain Allen Treadaway, who also serves in the state legislature, wants to put naloxone in the hands of those who might save heroin users from overdoses. Photo by Tom Gordon.

A bill that would authorize more people, including law enforcement officers, to administer a life-saving drug to heroin overdose victims has been drafted for the upcoming session of the Alabama Legislature.

The life-saving drug in question is naloxone. Treadaway’s bill refers to it as “an opioid antagonist.” At present, trained paramedics administer the drug to someone overdosing on heroin, or hydrocodone, or other opioid painkillers. Dr. Mark Wilson, Jefferson County health officer, says heroin or hydrocodone might relieve pain by binding with “receptors on the cells in your nervous system,” but they also slow down respiration and breathing. Naloxone “binds the same receptors that opiods do and displaces the opioids temporarily” and thus reverses the overdose for a while, Wilson said.

In summary, the Treadaway bill “would authorize a physician or dentist to prescribe” naloxone to an individual at risk of experiencing an opiate-related overdose or to an individual who is in a position to assist another individual at risk of experiencing an opiate-related overdose.” The measure also would provide legal immunity to the prescribing physician or dentist as well as to the individual who administers naloxone to someone who is overdosing. That person, according to the draft of the bill, can be a family member, a friend or someone else, including a law enforcement officer.

Calls for more people to be authorized to administer naloxone have arisen in light of the growing public concern over the increasing use of heroin in Alabama. In Jefferson County, the addictive narcotic was the primary cause of 137 deaths in 2014, more than double the 58 recorded in 2013 and in 2012, according to Chief Deputy Coroner Bill Yates. Yates also said that heroin contributed to seven additional deaths in 2014, but had contributed to two in the previous year.

In 2008, the county recorded only 13 heroin overdose deaths.

Last fall, the Jefferson County Board of Health passed a resolution that, among other things, called for allowing “more first responders, including local law enforcement, to be equipped with naloxone and properly trained to use it for reversal of suspected heroin or other opioid overdose.”

“My opinion is that naloxone should be available not only for police officers, but for anyone who may need to use it to help a friend or a loved one or someone they know who is at risk for an overdose,” Wilson said.

Some law enforcement officers have expressed reluctance about doing something that trained medical professionals now do, and Treadaway said he understands the concern. He said the bill will not require officers to administer naloxone, just give them “the opportunity, if they choose, to have it available, with some immunity.”

In a speech last April, Atty. Gen. Eric Holder said that nationwide, “heroin overdose deaths increased by an alarming 45 percent” from 2006 to 2010. Holder also called on “all first responders — including state and local law enforcement agencies — to train and equip their men and women on the front lines to use the overdose-reversal drug known as naloxone.”

Holder also said that “17 states and the District of Columbia have taken steps to increase access to naloxone, resulting in over 10,000 overdose reversals since 2001.”

Ross Sheffield, assistant chief of the Birmingham Fire and Rescue Service, said service emergency medical technicians typically administer nalaxone three to seven times a week to overdose victims. Sheffield said that allowing police officers to administer naloxone may not make a difference in a city like Birmingham, where EMTs and law enforcement officers often arrive at an overdose emergency at about the same time. But in less populated or rural areas, it could make a big difference, he and Treadaway said.

“A lot of times, especially in the rural areas, policemen may get there maybe 30 minutes before [paramedics] or an ambulance can get there, so they will be sitting there with nothing to do,” Sheffield said. “But if they had the naloxone, they at least can start the process of trying to preserve life and get the block from the effects of the heroin that the person has taken.”

The Rev. J.Sandor Cheka III, executive director of the Birmingham-based Addiction Prevention Coalition, said some people may think that greater availability of naloxone as envisioned in the Treadaway bill will encourage more heroin use, “but if you look around the country at the actual statistics, it really doesn’t increase your heroin population, but allows people to find help…and that’s one of the reasons that I think it’s so important that we do pass it.

“We know it’s not the end-all be-all…fix for this [heroin problem], but at the same time, we truly believe that having that available more readily will save some folks’ lives,” Cheka said.

Treadaway said cash-strapped small police and sheriff’s departments may not always be able to afford an up-to-date supply of naloxone, but “hopefully there could be some grants…that would help them get the stuff.”