He controlled a 6-1 decision over Vestavia Hills’ Morgan Paugh in the 160-pound finals Friday in Huntsville’s Von Braun Center.

Perry claimed a 2-0 lead early in the match and held Paugh, who he lost to in the 2014 state championships, scoreless all the way through the second round. Paugh did manage a third round point, but Perry tacked on five more to bring Huskies fans to their feet. 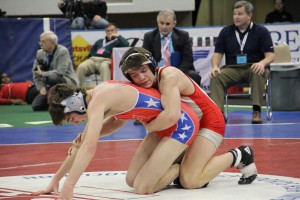 “They’re really supportive, all of them and I just love them,” said Perry of Hewitt-Trussville fans.

The junior felt like he was on a yearlong mission following his defeat at the hands of Paugh last season. As of Friday afternoon, it’s a mission accomplished.

“It feels amazing, especially since last year I faced the same kid, lost, and this year I worked hard during the summer and it really paid off,” said Perry following the win.

Going into the title match, Perry knew he would have to handle his opponent’s unorthodox style, something he was unable to do a year earlier.

“I knew that he was really funky,” Perry said. “I really knew that he was going to try to roll me, so all week I had been working on going ankles, no around the waist so he couldn’t roll me. I was just working all year trying to get better and eliminate his funk. It really paid off.”

Hewitt-Trussville’s other state finalists didn’t quite manage the same payoff. Senior Dalton Meadows took an early 4-2 lead in the 145-pound championship match but couldn’t hold off Vestavia Hills’ Hayden Hill in a 10-7 decision.

The match was deadlocked at 6-all going into the final two minutes before Hill took the senior’s back twice to take a lead down the stretch.

The Huskies finished third as a team behind No. 1 Thompson and No. 2 Vestavia Hills in the final Class 7A standings. 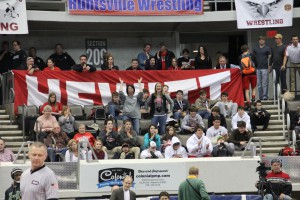 For Pinson Valley, Hank Turner and Deon Gregory took silver. Turner lost a hard-fought battle to Scottsboro’s Brett Clark in the 152-pound finals. The match was lost by a 4-3 decision.

Turner, the defending Class 5A champion, ended his junior season 62-3.

Gregory lost to Southside-Gadsden’s Kade Kitchens in the 170-pound finals. Kitchens applied the pin with 1:52 remaining in the second round.

At 160 pounds, Clay-Chalkville’s Austin Weldon came up short against Wetumpka’s Khaliq Jones in the 6A finals. Jones took an 8-4 decision for the gold.