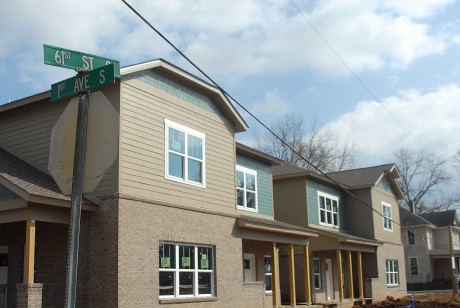 A new housing project is being built off 1st Ave. South in Woodlawn. Photo by Julianna Lee Hunter.

In Woodlawn, the $13.6 million Wood Station Townhomes development is set for completion later this year. Residents could begin moving in as early as late spring according to Sally Mackin, the executive director of the Woodlawn Foundation.

Mackin sat down with Weld to discuss the completion of the new 64-unit “mixed-income” housing development that her organization is overseeing, a project she hopes will make a positive impact on Woodlawn’s housing market and community as a whole.

Weld: Why don’t you start off by talking about the Woodlawn Foundation and how it got started?

Sally Mackin: In 2010 Mike and Gillian Goodrich were looking to create something impactful and measurable in Birmingham. They were familiar with the purpose-built model that had been implemented in the East Lake neighborhood of Atlanta. Over the success of that plan, probably over 15 years, a couple of pretty big investors decided they wanted to try and replicate the success they had. If it’s successful, then it’s replicable.

So they formed Purpose Built Communities, which is actually a free consulting nonprofit that collaborates with other neighborhoods across the country who are wanting to do this holistic revitalization. The main requirement of that, however, is having a sustainable lead organization. So Mike and Gillian Goodrich founded the Woodlawn Foundation for that purpose and it is a separate entity from their foundation [The Mike and Gillian Goodrich Foundation], but they still support us. But we are a public charity, so we are out there like all the other nonprofits trying to raise a sustainable revenue stream.

Weld: Could you tell me a little about what the foundation does?

SM: We try to act as the hub, a real true collaboration that is working in the Woodlawn community. The success here really depends on having an organization that wakes up every day and is focused on Woodlawn. It’s a place-based initiative and we have tremendous partners. We try and be the connecting factor for the residents who live here and the stakeholders in the community and make sure that mission and that vision can come true. And we want to do everything purposefully.

Weld: How has that mission worked so far?

SM: It’s been great, but it’s been hard. I think community revitalization in general is opportunistic because you have to do things that present themselves but also try and have a strategy and a plan.

Weld: How do the Wood Station Townhomes fit into the Woodlawn Foundation’s strategy of holistic revitalization?

SM: So our strategy is two-pronged, and the first piece of that is education. We focus on building a birth-to-career educational pipeline. We are working with the Birmingham City Schools and several other organizations. But it’s really making sure we create opportunities for students and family to be able to transition through without falling through at any point.

The second piece of that is mixed-income housing, and recognizing that decades and decades of concentrating poverty has not been successful. So we are really approaching this as a way to build high-quality, affordable housing at every economic level. When I say “affordable,” I don’t necessarily mean subsidized or rent-restricted, but rather housing that is very high quality that can be competitive in a market to attract residents at every income level.

We are using low-income housing tax credits that really serve families up to 60 percent of the area’s median income. This is really workforce housing. It’s kind of the second tier. Of course Birmingham Housing Authority manages all the public housing in the city, they serve people who are typically in that 30 to 50 percent median income level, so we are kind of getting up to that next level.

Weld: Are there any other developments like this already in Woodlawn?

Weld: When will it be completed, and how is this project being funded?

SM: It will be done by summer. And we will be able to start moving residents in possibly as early as late spring. The low-income housing tax credit program is something done through the [Internal Revenue Service] and tax credits are allocated through the Alabama Housing Finance Authority and awarded based on competitive applications, which are submitted in March of each year. Those tax credits are awarded to a sole investor and that money comes into the project as equity, and then that equity partner is the owner entity for the 10-year period that the credit’s allocated for.

Weld: Would you say this project can serve as an example for the direction that Woodlawn in heading in — toward a revitalization of sorts?

SM: This is a platform we hope that will really build a foundation for the private market to really drive the rest of this mixed-income model. In order to truly have a mixed-income community, we’ve got to be able to attract the private sector to come in and develop market-rate housing. And we’re hoping that this development will really be the catalyst that will stabilize this piece of the community, which will help with crime and perception and help to develop vacant properties. All these things are contributing to building that platform for the market to take over. That’s really what we want to happen.