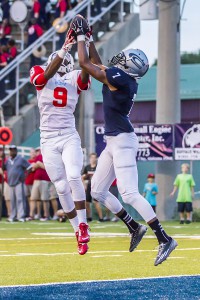 CLAY – While on the phone with Alabama head football coach Nick Saban Thursday afternoon, Clay-Chalkville’s Jerry Hood told the coach to take the time to meet sophomore receiver Nico Collins before he offered the 2017 prospect a scholarship.

By Friday afternoon, Collins found himself in the Mal Moore Athletic Facility meeting Saban and getting his third Southeastern Conference scholarship offer. He already held a Mississippi State and Ole Miss offer.

Hood stated that the junior-to-be has no intentions of making a commitment quickly.

“I’m sure he wants to talk to his parents,” said Hood. “He’s going to have to be talked through how to handle these things and remain a good young man.”

Collins was accompanied by fellow Cougar wideout T.J. Simmons, who chose not to sit on the Alabama offer he received just a day earlier. Simmons, however, is an upcoming senior that knew the Capstone was the right place for him.

Simmons lives in a crimson colored family, while Collins doesn’t claim his allegiance to any program. The sophomore does admit to cheering for the Oregon Ducks every so often, though.

Regardless of where they end up in college, it’s safe to say that the Clay-Chalkville passing game will be feared by defenses all over the state in 2015.

“They have a lot of God-given ability, but the thing I’m proudest of is both of them are great kids,” Hood said. “They don’t get mixed up in any trouble and they take care of their business at school.”

Between the two, Simmons and Collins went for 1,770 receiving yards and 32 touchdowns on their way to a Class 6A state championship last year.

For the second consecutive year, quarterback Ty Pigrome, who holds offers from six Division I programs, will be tossing the ball to his two gifted targets.

“Those two kids have a lot to be thankful for on behalf of their teammates,” said Hood. “It’s a team effort, these two kids just have been blessed with God-given ability.”