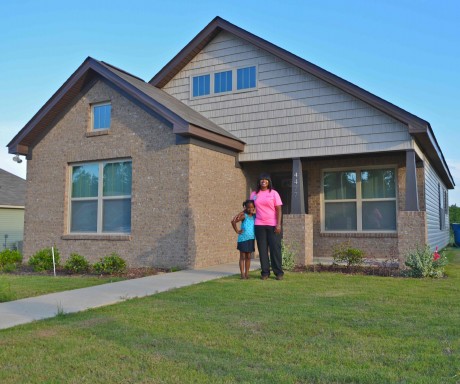 “It’s what good public policy is all about,” Keivan Deravi declares. “It is morally correct, as well as economically efficient.”

The “it” to which Deravi refers is the Alabama Housing Trust Fund. According to Deravi, Alabama’s fund could generate $1.1 billion in economic impact and create 6,500 full-time jobs over the next 10 years by creating a permanent funding stream for the AHTF, which was established in 2012 but remains unfunded.

“That’s a sizable economic impact,” says Deravi, an economics professor and special assistant to the chancellor at Auburn University Montgomery. He uses the word “leverage” repeatedly in describing the way a fully funded AHFT can work, bringing together resources from government, business and the nonprofit sector to expand economic opportunity across Alabama — especially for those with the greatest need.

“The lack of affordable housing has been one of the most persistent economic and social problems Alabama has had throughout its history,” Deravi says. “If you approach it as a partnership between the private sector and public and nonprofit entities — where you have that level of cooperation, you can leverage something that is sustainable. Add to that the social benefits of having affordable housing for as many people as possible, and the economic impact can be huge.”

These and other findings are part of a report Deravi produced for the Low Income Housing Coalition of Alabama, which has been the lead advocate for the AHTF. The report was released officially at a Monday, Feb. 23, news conference in Montgomery. Scheduled to appear at the news conference alongside LIHCA officials and Deravi was state Rep. Patricia Todd, of Birmingham.

Todd is sponsoring a bill that, if enacted during the legislative session that begins on March 3, will raise the Mortgage Record Tax — the one-time fee the state charges to cover the cost of documenting each mortgage loan transaction that takes place in Alabama. She says the abundance of similar funding models that are working across the country makes her optimistic about the bill’s chances. Proceeds from the increase will be used to create a permanent funding stream for the Alabama Housing Trust Fund, with the funds to be administered by the Alabama Department of Economic and Community Affairs.

“The way things work in the legislature, if you want something funded you have to go and find the funding source yourself,” Todd says of the efforts to get the Alabama trust up and running. “Now, we’re offering a funding source. We’ve looked at other states that have robust housing trusts that are working at every level, and we want Alabama to have that same outcome. It’s an opportunity, and we want to make it as broad as possible.”

Upon its enactment, the measure would increase the tax to 30 cents per $100,000 of indebtedness incurred by the property owner on completion of a given transaction. For example, the recording fee on a mortgage of $140,000 — roughly the median home value in Jefferson County — would be $210, up from the current $105.

The increased revenue would total an additional $45.7 million in annual revenue (based on revenue collected from the existing mortgage record tax during fiscal 2014), doubling the state’s total revenue from the tax to about $91.4 million. Of that total, approximately $22.8 million would be designated for the AHTF, with the rest to be divided between Alabama’s 67 county governments and the state’s General Fund budget, according to a formula that is still being finalized for inclusion in the bill Todd will introduce. It is also expected that a small portion of the total revenue — perhaps 5 percent — would be set aside for county probate courts, where completed transactions are recorded.

As of now — a week before the legislative session opens — Todd says the funding bill is “getting good support” on both sides of the aisle in the Republican-dominated legislature. With LIHCA and other housing advocates across the state, she has worked on building support from a diverse group of interests that includes business groups, bankers and real estate developers, in addition to elected officials, community groups, nonprofit service providers and low-income individuals.

“Putting the Housing Trust Fund to work will help reduce poverty in Alabama,” Todd says. “It will open up new opportunities for homeowners and renters. And beyond all of that, just that small increase in the mortgage record fee gives us millions more in the General Fund. I don’t care whether you’re a Republican or a Democrat, that makes it hard to argue against.”

LIHCA project manager Ashley Kerr acknowledges that the proposed “tax” increase doubles the current rate of $0.15 per $100,000 of indebtedness. But Kerr also is quick to point out that the current rate has not changed since 1935.

“In terms of putting a substantial dent in a crisis we’ve been facing in Alabama for many years, this will make that possible,” Kerr says. “It helps kids, veterans and hard-working people stuck in low-wage jobs. It will be a tremendous help in disaster recovery. It’s about time for Alabama to invest in itself and its people, and this is a good way to do it. It makes sense to have the revenue for affordable housing coming from property transactions.”

Created by act of the Alabama Legislature and signed into law by Gov. Robert Bentley in 2012, the Alabama Housing Trust Fund is intended to provide a flexible funding source for a wide range of activities aimed at increasing the state’s available stock of affordable housing. Establishing the AHTF made Alabama one of 47 states and the District of Columbia that have at least one housing trust fund. But the 2012 measure did not specify a funding source for the AHTF, making Alabama one of only six states — along with Arkansas, California, Idaho, Montana and Rhode Island — that have created trusts, but secured no funding source for them.

Weld first reported on efforts to fund the AHTF last June, as part of the ongoing series of reports, “Poverty in Birmingham.” That article, citing figures provided by LIHCA, reported that Alabama has a current shortage of 90,000 affordable homes for low-income people. It also summarized the range of housing activities — including construction of new homes and rehabilitation of existing ones, as well as building independent adaptive homes for people with disabilities and permanent supportive homes for people with severe challenges — for which the AHTF will use its resources to help private lenders and contractors defray some of the financial risks involved with investing in affordable housing.

“Construction is an economic multiplier,” says Deravi. “By investing in construction projects that meet demonstrable community needs, the housing trust generates economic impact that is felt locally,” in terms of both housing opportunities and job creation. In addition to the $1 billion-plus economic impact and 6,500 new jobs forecast in his study, Deravi estimates that more than 7,100 homes — including new and rehabilitated single-family and multifamily homes — will be built or rehabilitated over the same 10 years.

Jim Fenstermaker is a senior consultant with the Kimberly Richardson firm — the company assists organizations with the writing and management of grants — and a longtime advocate for a housing trust fund in Alabama. Fenstermaker has spent more than 30 years in economic and community development and urban planning, the vast majority of it in the public sector, including a lengthy tenure as community development director for the city of Birmingham. In a state where affordable housing has never been a priority, he says, the AHTF will aid the development of a more strategic approach that is an integral part of addressing poverty and other longstanding economic issues.

“It’s an opportunity to do the right thing and create jobs,” Jim Fenstermaker says. “There are real, substantive spinoff benefits that will occur over time. It’s not as if this puts us near the cutting edge of anything. Alabama is one of 47 states that have housing trust funds. But we can sure take advantage of the opportunity that it gives us to start doing things in the present that will have an impact for generations into the future.”