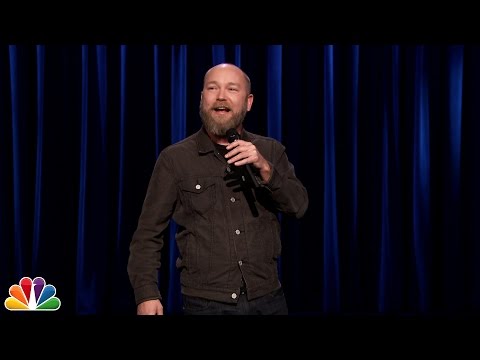 The literal voice of comedy

Kyle Kinane is everywhere. Since 2011, he’s been the voice of Comedy Central — you may have heard him remind you to tune into the newest episodes of Broad City or Jon Stewart — but the 38-year-old comic also has his own flourishing stand-up career. His third stand-up special, I Liked His Old Stuff Better, premiered in January, and since then he’s made appearances on the Comedy Bang! Bang! podcast and The Tonight Show Starring Jimmy Fallon.

Kinane will continue his incredibly busy year with a performance at Bottletree Café on March 2. Last week, he chatted with Weld about his comedy background, being well-adjusted and the dangers of his jokes being taken out of context.

Weld: I’ve done my research, Kyle, and one thing that’s clear from looking at your Wikipedia article is that you barely existed at all before your first stand-up special in 2010. Tell me a little bit about your career before that and how you started off as a comic.

Kyle Kinane: I started in 1999 in Chicago. I was farting around with the music scene but I wasn’t very good, and I needed something. I was not throwing my life into anything with passion. I didn’t have a family or a career. I guess I was real scared of being just an ordinary dude.

I found an ad for a comedy open mic, and was like, “You know what? I’ve always liked watching comedy. I fancy myself a pretty entertaining fellow.” I was not self-aware enough to realize that I was just an [expletive] at parties. But I tried comedy and just knew, “This is what my life’s gonna be. Success or not, this is what I’m going to do.”

Guys have their poker games, that’s how they get out of the house, they go golfing or something. I decided [comedy] would be the thing I would get good at [doing], because I wanted to prove to myself I could get good at it.

Weld: One thing that makes you rare among comics is that you seem pretty well-adjusted and happy.

KK: Yes! The universe wants me to tell jokes for a living. If I can’t be happy with that, well, then [expletive] me, what else do I want out of this world? It’s one of the most unexpected things that could have ever happened to me. I was the kid in school who was a smart-ass, and the teacher told me, “I think you’re gonna be a comedian.” And then that happened! What, am I going to mope around? Pretend the same stuff that happens to me happens to everybody else in the world? [It’s not like,] “Boo hoo, my life’s [expletive] rough.”

Weld: Your routine also focuses on finding the beauty in everyday life.

KK: Because I get to do comedy, I’m not weighed down with the pressures of mortgages and how I’m going to pay for my kid’s college. I can only imagine that takes up so much headspace, all that worry and trepidation about the future. I don’t have that, so I can, as cheesy as it sounds, stop and smell the roses. And stay there for a couple hours, just smelling ‘em, because I’ve got nowhere to be.

Weld: You’ve served as the voice of Comedy Central’s on-air promos since 2011. Where do you find time to record all those voice-overs? That’s gotta be hours of work, on top of being a touring comic.

KK: Oh yeah, it’s the toughest 35 minutes of my day, let me tell you. Having to go [into a sound booth] and have a cup of coffee, and then spend 20 minutes telling somebody that Workaholics is on? Nobody’s had it rougher.

Weld: There was an interview with Chris Rock last year in which he talked about how it’s tough to do controversial jokes in this social climate, because more people are more likely to record it out of context and get offended. You cover some very touchy material about things you regret from your past in your most recent special; do you see these kind of topics as a risk?

KK: As I’ve said before [about my audience], I’m willing to lose most of you to win over a few of you. I’m not trying to be Dane Cook. If I want Madison Square Garden filled with people that won’t remember a single joke, I could go that route. Or I could just keep doing the same thing that got me here.

You know, who are the people who get outraged about stuff? Are they the ones that are loyal, coming to shows all the time? Or are they just someone who wandered into a comedy club, and are like, “You can’t say that!” [I would say to them] “Well, you weren’t going to buy a ticket for my next show anyway, so whatever.” I’m not trying to press peoples’ buttons, I’m not trying to be controversial.

[But] we live in an outrage culture, and everybody wants to yell the word “problematic” just because they hear a word without the context. Every dumb [expletive] with a cell phone doesn’t realize that just because they [are outraged], it doesn’t mean anything, they’re still a [expletive] little person.

Weld: Well, I do plan to chop this interview up, take away all the context, and make you look totally horrible.

KK: [Laughs] Nothing’s better than that episode of The Simpsons where they show an interview with Homer and the clock is constantly changing in the background. A lot of people will take anything out of context, not want to hear the whole story, just jump to conclusions because they watched a 30-second web clip. I’m so happy I’m just old enough to have grown up without all that [expletive] going on.

Weld: As you mention in your latest special, perhaps the zenith of your career was when you were interviewed last year for Hustler. How’s this one stacking up to that?

KK: You’re knocking it out of the park. There’ve been no deep-cutting sexual questions!

Kyle Kinane will perform at Bottletree Café on Monday, March 2. Doors will open at 8 p.m.; the show will begin at 9 p.m. Tickets are $15. For more information, visit thebottletree.com.