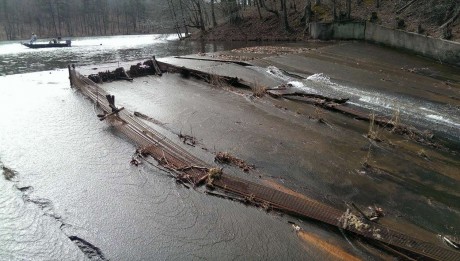 A threat to public safety?

The top of one of the Oak Mountain dams that local officials are concerned is not being properly maintained by the state. Photo by Cody Owens.

Officials and activists are worried that an aging earthen dam at Oak Mountain State Park is deteriorating and in dire need of maintenance. Their concerns came to light during a recent public hearing.

The public hearing was ostensibly about a proposed hotel and convention center, which was drawing much opposition from members of the community. But the head of Keep Oak Mountain Wild (KOMW), the organization leading the charge against the proposed hotel, said the dams are a current source of concern.

“This is really a public safety concern,” said Randy Jaudon, chair of KOMW. “I believe we need to have an independent evaluation of the dams, no matter what the cost.”

During the March 2 public hearing at the Pelham Civic Center, Jaudon asked several questions about the status of the four earthen dams in the park.

Alabama Parks Department Director Greg Lein said he does not believe the dams in Oak Mountain are in dangerous condition. “Our dams have been repeatedly inspected and are presently being looked at as part of an innovation study and in each of those instances the engineers that have looked at the dams have basically said they are fine,” Lein said.

“Now, we are undertaking some maintenance actions on the dams, some that we’ve been asked to do and some we have initiated on our own,” Lein continued. Such maintenance is just part of the normal monitoring process, he said.

Jaudon, on the other hand, said Lein had denied a request by Pelham Mayor Gary Waters, to access a grant that would allow the Army Corps of Engineers to inspect the dams. The grant would have saved the state money on the inspection, Jaudon said.

“Mayor Waters spoke to me briefly this past year about that in passing in the hallway,” Lein said. “I’m not familiar with the specifics of that. At that time, what we were doing was contemplating the innovation study and I thought that’s what we ought to do. It’s been a partnership effort.”

At the March 2 meeting, Indian Springs Village Mayor Brenda Bell Guercio said that she has asked the state to look into the safety of the dams for several years now – her town sits below one of the dams — and did not agree with Lein’s remarks.

“I was in your office and I asked you about this issue,” Guercio said. “I asked you to please allow the dams to be inspected by an independent group of engineers that is not being paid by the state.” Guercio added that at the time of their meeting Lein asked for a month to think about it.

“My question for you now is will you allow this to happen?” Guercio asked.

Lein responded, “There are a lot of people here tonight who also have concerns about the park.” He then took the microphone from Guercio and moved on to the next question.

The inspection sponsored by the State Parks Department— the basis for Lein’s stated lack of concern about the condition of the dams—indicated that problems could arise with the dams’ integrity if the large trees growing onto the embankment were to be removed.  That study was completed by Clif Dixon, a landscape architect with the Alabama Department of Conservation and Natural Resources.

In his 2011 report, Dixon stated, “Large trees present in the embankment may create a problem if above surface trees are removed leaving the root system to decompose/decay and potentially causing a void in the embankment. There are a number of very large trees on the north east [sic] portion of the dam embankment and it would appear that the removal of these trees would be not only cost prohibitive but detrimental and impractical.”

Dixon did say, however, that “The dam structure appears to be functionally sound.”

In July 2013, Guercio wrote a letter to Gunter Guy, commissioner of the Alabama Department of Conservation and Natural Resources, about the conditions of the dam and the possibility of having the dams inspected by independent engineers.

“As you may know, Alabama is the only state in the 50 states that does not have a State Safe Dam program. We did however reach out to the president of the National Association of State Safe Dam Officials,” she wrote. “He was kind enough to speak with one of our council members at length and explained the damage earthen dams can sustain from tree growth.

“He also explained that such conditions are indeed significant dam safety issues. He confirmed that leaving the mature trees in place is not an acceptable means of remediation,” Guercio wrote.

Lein, who also received a copy of Guercio’s letter, responded to it by referring back to the 2011 Dixon study. “While our review of this information suggests no immediate problems with Oak Mountain Lake’s dam or spillway, we recognize that this is an aged structure that could experience problems possibly resulting from catastrophic weather events,” Lein wrote. “Consequently, our staff will be making a site visit in the near future to access the conditions there and considering options for trees present at the dam area.”

A man on a paddle board works his way across Oak Mountain Lake. Photo by Cody Owens.

“I’ve been really outspoken about the situation with the hotel possibly being put out here. But this is a completely different situation we’re talking about here. This is about public safety,” Jaudon said as he walked through the woods towards the dam.

At the top of one of the dams, Jaudon pointed to several trees that were growing on the side of the dam that had blue marks on them. “Those trees have been marked right there. I assume that means they need to be removed but nothing has happened with them and they’ve been like that for a while. You can see some of the areas where the roots have pushed through the retaining wall,” he said, shifting his attention to the other side of the dam and pointing out visible cracks.

Jaudon resides in Indian Springs, and said he is worried for the safety of those who live in the area. Oak Mountain Middle School is located about 500 yards from the base of the dam.

“It boggles my mind that they have an opportunity for the Army Corps of Engineers to look into this for free. You think they would jump all over this opportunity,” Jaudon said.

While Jaudon believes the condition of the dams to be much more serious than the possibility of a hotel being placed in the park, he said there is a connection between the two issues. The potential runoff from the construction would only add stress to the aging dam, he said.

In 2013, Guercio contacted an independent engineering company about reviewing the information concerning the dams. Thomas Martin, president of Martin Engineering Company, wrote that, “The question is not if the dams will fail, but when.

“The points you raise concerning tree growth in the dams are valid and should cause for concern to local officials. Allowing tree and vegetation growth in an earthen dam and spillways to become overgrown or in disrepair, are two of the worst items that a dam owner can ignore,” Martin wrote.

He recommended that a Safety Evaluation of Existing Dams be commissioned by qualified geotechnical and hydrological engineers independent of the State Parks Department, “as soon as possible.”

Nearly two years later, in a February 5 letter, Guercio asked Lein again if the state would allow for an independent inundation study. “We are still adamant that you allow the four earthen dams within the park to be inspected by a professional engineering group that would include a hydrologist, structural engineer and a geotechnical professional.

“As we discussed in our meeting a few weeks ago, Mayor Waters of Pelham, Alabama has access to a grant from the Army Corps of Engineers to inspect the dam at no cost. You told me your reason for resisting this was that it put the premise out there that the dams are unsafe and that in fact you were opposed to obtaining an inundation study that would then allow an Emergency Action Plan to be developed for those in the vicinity of the dams. I sincerely hope you rethink this position, as it could have devastating consequences if there was ever a dam breach.”

Multiple attempts were made to reach Lein for further comment about the state’s disposition on the dams, but he did not return calls to Weld. Still Jaudon said KOMW and others intend to keep applying pressure to get the dams independently inspected.