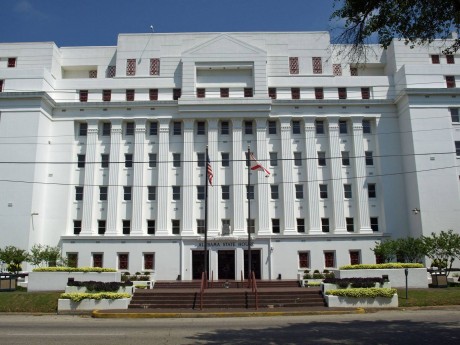 The School Choice and Student Opportunity Act is the first bill to make it through the Alabama Senate this year. Photo courtesy of Spyder_Monkey on Wikimedia Commons.

A bill passed by the Alabama Senate last week may allow for publicly funded charter schools to open their doors in Alabama.

The School Choice and Student Opportunity Act passed with a vote of 22-12, and would allow for up to 10 charter schools to be established in Alabama each year, with the option to transition existing schools into charter schools.

The Alabama House of Representatives could vote on the bill as early as this week.

Senate President Pro Tem Del March (R-Anniston) said after the passage of the bill that it is a great day for students and parents throughout the state of Alabama.

“For far too long parents have been stuck with the status quo when it comes to the quality of education for their children. I understand that there is no silver bullet to solve all problems in education, but public charter schools give parents an option,” Marsh said in a statement.

Currently Alabama is one of only eight states that does not have any charter schools.

There has been no shortage of opposition from those who believe charter schools will take away funding from the established public schools.

Alabama Senate Minority Leader Quinton T. Ross Jr. (D-Montgomery County) said that he was disappointed with the passage of the bill, which he believes to be a step in the wrong direction.

“Although we are disappointed and believe this is a step backward for schoolchildren throughout the state of Alabama, we will continue to work with our colleagues in the Alabama House to see if we still can get some of these amendments added to the bill,” Ross said.

“If we can get more of our concerns ironed out, this bill will be more palatable for all those systems which will be effected,” Ross continued.

Advocates for the bill, including the National Alliance for Public Charter Schools (NAPCS), believe that the bill will pass in the House. That vote is expected to happen within the week according to Todd Ziebarth, the senior vice president of state advocacy with NAPCS.

Over the weekend the bill passed the House Education Committee. “We’re anticipating the House to vote on this sometime this week, possibly Wednesday,” Ziebarth said on Monday.

Although he anticipates that the House will pass the bill, Ziebarth said if any changes are made the bill will have to go back to Senate to concur on those changes. He said that even though it appears that the process of getting the bill passed may seem to be moving quickly, it has been five years in the making.

Last week’s vote indicated a divide between the two parties in the Senate, with Republicans being in favor of allowing charter schools to operate within the state.

Ziebarth explained that Republicans have been more supportive of charter schools than Democrats who fear that the charter schools will bleed funding from the education budget.

“In Alabama, the Senate vote was largely along party lines. And in the House it’s unclear if Democrats will come across the aisle and support it,” Ziebarth said.

“One of the myths is that charter schools are not public. They are held accountable for student achievement the same way that traditional public schools are. They can’t discriminate against race or gender or anything like that,” Rees said.

Ziebarth said that having a system in place where individual school systems can create their own charters is equivalent to “McDonalds approving plans for a Burger King.”

As is the case in Alabama, Ziebarth explained, if the bill passes the house and a school district in Alabama wants to authorize charters in its district they will have to register with the state and provide information regarding what the focus of the school will be.

“Let’s say I want to open a charter school and I was in Birmingham. I would have to go to the Birmingham School Board and apply to them. If they reject me, I could appeal that decision to the state commission to review that decision,” Ziebarth said.

Representatives with the Birmingham Board of Education have said they would not like to comment until the bill is voted on by the Alabama House of Representatives.

The biggest difference between traditional public schools and public charter schools, Rees explained, is that charter schools have the flexibility to hire qualified teachers who aren’t necessarily part of a union.

“Charter schools inject new blood and new energy into the debate on education.

Plenty of erroneous rules on who you should hire and how long the school day should be.  Educators have more flexibility to make course corrections if something is not working and they don’t have to rely on a centralized bureaucracy of a school system,” Rees said.

Rees noted a report published last year by the organization Students First gave the state of Alabama an “F” when it comes to governance of the education system.

“There’s a lot of evidence right now supporting why charter schools will make a difference in Alabama and we’re hopeful that the legislature will pass a law that will open up these options,” Rees said.