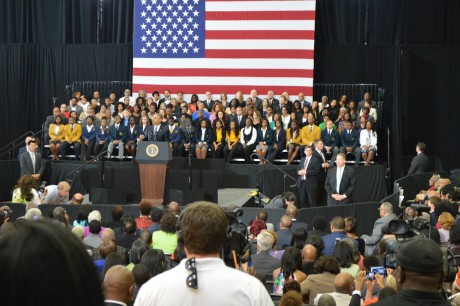 For the second time this month Air Force One touched down in Alabama. President Barack Obama came to discuss the new budget passed by House Republicans and his plans to crack down on predatory payday lenders.

Thousands of people lined the streets leading up to Lawson State Community College Thursday, waiting patiently to catch a glimpse of the presidential motorcade. The president arrived in Birmingham in the afternoon, spent a few hours in the city, mostly at Lawson State, and then flew out by late Thursday.

During his address, Obama spoke about middle class economics and the importance of having a strong working class. That all begins with a quality, affordable education, he said. “The cost of community college should be zero,” Obama said to raucous applause. “It should be as free to everyone as a high school education.”

The president talked about good news and bad news coming out of Congress. According to the president, the good news is that, “the House of Representatives passed a bill today.”

“You think I’m joking. I’m not,” he said with a smile. “It was a bipartisan bill designed to make sure that doctors in our Medicare system get paid on time, that the children’s health insurance program continues to work.”

Obama said he called House Speaker John Boehner and Minority Leader Nancy Pelosi and congratulated them saying, “This is how it is supposed to work.”

“Let’s do more of this,” Obama said. “I want to give John Boehner and Nancy Pelosi credit. They did good work today.”

On the other hand, the president’s remarks came on the heels of a budget passed Wednesday night by House Republicans, and that, he said, was not good news. “The bad news is that the Republicans in Congress unveiled their budget and it represents the opposite of middle class economics,” he said.

Obama said the budget will, “Weaken efforts to protect consumers and roll back the progress we have made in creating a safer financial system and a stronger economy that supports the middle class.”

The new budget blueprint has been heralded as a big win for the GOP controlled House of Representatives. However, the president chided the budget as a way for the rich to get richer, saying that it would hand out tax cuts to millionaires and billionaires while increasing taxes for students and working families.

In Alabama Obama said there would be an “average of $2 million in tax cuts that would apply to about 50 people.”

In regard to tax cuts for the rich, Obama also mentioned that he would veto any attempt by Congress to undo the Wall Street Reform bill that he signed in 2010.

In a key point particularly relevant in Alabama, Obama said that the new budget would hinder efforts to crackdown on payday loan and title loan lenders who trap borrowers in a vicious cycle of debt and outrageous interest rates.

Alabama has very little regulation when it comes to payday loans. The law stipulates that borrowers can only borrow $500 at a time. In spite of this, many borrowers find themselves being charged as much as 456 percent interest for their loans.

“There are four times as many payday loan stores as there are McDonalds here in Alabama,” Obama said. “Think about that.”

“If you’re making your money by trapping hardworking Americans in a cycle of debt they can’t pay back, you need to get a new business model because that is no way to do business,” he said.

The independent watchdog agency, Consumer Financial Protection Bureau, was created by the administration with one purpose in mind, Obama said, “To look out for all of you people,” and protect borrowers from predatory lenders.

“They’ve already put $5 million back in the pockets of 15 million families” because of unfair lending practices that many of these payday loan companies exercise, Obama said.

He explained that the CFPB is working closely with state and local officials to make sure that not only are people borrowing responsibly, but also that lenders are not taking advantage of their customers.

“We’re taking new steps towards cracking down on some of the most abusive practices involving title loans and payday loans,” Obama said.

“The idea is pretty commonsense,” he said, referring to the new initiative by the CFPB. “If you lend out money, you have to first make sure the borrower can afford to pay it back. Don’t let someone borrow money if you know they can’t pay it back.”

The president also noted that the economy, despite the congressional malaise, has been steadily on the rise since he took office in 2008. For 60 straight months, he said, the private job sector has experienced growth.

“We’ve created 12 million jobs,” Obama said. “Nationwide, the unemployment rate has gone from 10 percent when I took office. Now it’s at 5.5 percent. There are more job openings than any time since 2001.”

Before Thursday’s presidential address, Birmingham Mayor William Bell took an opportunity to introduce the chief executive and address the crowd. As he approached the stage, the crowd erupted, some apparently mistaking Bell’s arrival for that of the president.  The mayor said he was flattered.

Bell said that he had a chance to tell the president about the great strides that Birmingham has made in recent years.

What Bell said he was most excited about was being able to show the president the people lined up the curvy residential roads leading up to Lawson State.

Obama’s speech, which lasted about 20 minutes and was vigorously applauded by the auditorium full of Lawson State students and Birmingham politicians alike, was the second time the president has visited Alabama this month.

On March 7, Obama was in Selma on the 50th anniversary of the “Bloody Sunday March” over Selma’s Edmund Pettus Bridge. Some pundits have labeled the speech he gave there as one of his best and most important since he took office in 2008.

The president wrapped up his Lawson State visit saying, “Hard work should pay off. Responsibility should be rewarded. … We are a country built on the idea that everyone should get a fair share and that we put laws in place where people aren’t taken advantage of. When this country does not live up to its promise of fairness and opportunity for all people, we all hurt.”