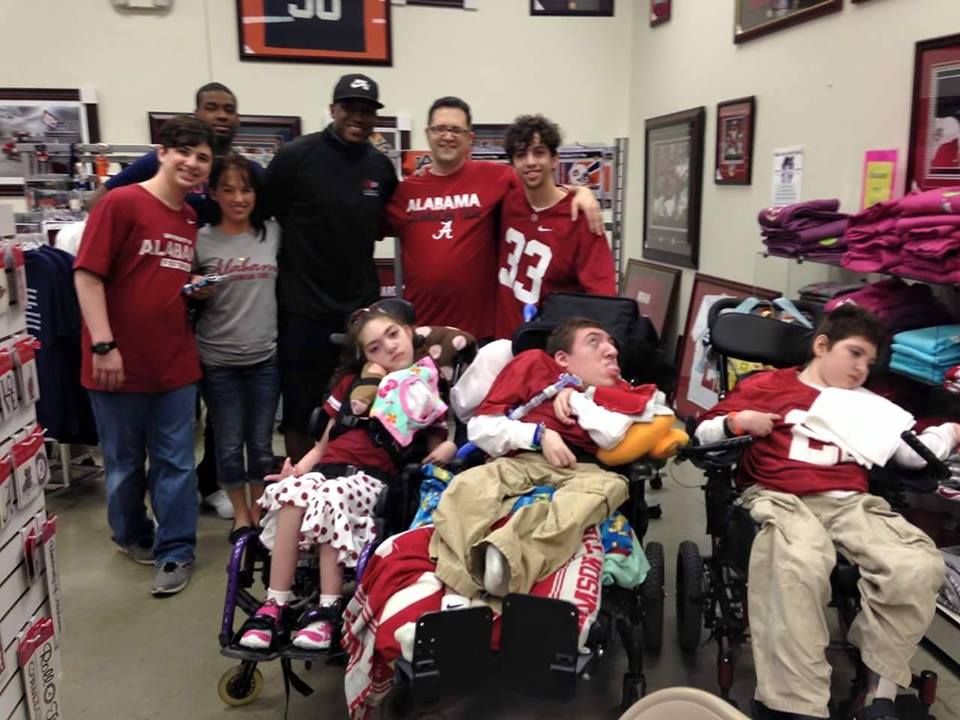 ‘I just want to give them more’

LEEDS — Blake Sims and Darrin Reaves could have been anywhere.

Sims, the former University of Alabama quarterback, could have been slinging footballs in preparation for the upcoming NFL Draft. Reaves, the former Clay-Chalkville High School and UAB running back now with the Carolina Panthers, could have been lifting weights, prepping for another NFL season.

On Saturday evening, however, both sat at a long, white table with Sharpies in their hands at Collegiate Warehouse at the Outlet Shops of Grand River in Leeds. They signed autographs for $30 each, with all proceeds benefitting the McCown family of Grayson Valley. 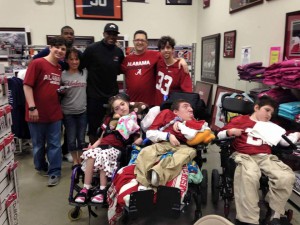 VIDEO: Watch former Clay-Chalkville and UAB running back Darrin Reaves, now with the Carolina Panthers, talk about the benefit for the McCown family.

The family includes Julie and Charles McCown, and their five children: Chase (22), Drake (17), Christian (15), Kristofer (12) and Grace (10). Drake, Kristofer and Grace are special needs and attend the Burkett Center. Chase attends college online and is an “enormous” help to the family, Julie McCown said. Christian is a Clay-Chalkville High School student.

When Julie McCown was pregnant with Drake, she was involved in a hit-and-run with an 18-wheeler on Interstate 65. The vehicle spun, flipped on its side, careened across traffic and hit a retaining wall. Drake suffered uterine shaken syndrome, and it was discovered he had suffered strokes before birth due to the accident. He’s a spastic-quadriplegic and has seizures. He is ventilator dependent. Julie McCown said the driver of the 18-wheeler was never caught.

Kristofer was born healthy but developed meningitis when he was 2 months old. Shortly afterward, he started having seizures. The day Grace was born, doctors discovered she suffered from a 1-in-100 congenital heart defect. She has a double-outlet right ventricle and has already been through two heart surgeries, one open heart.

“They’re blessings,” Julie McCown said. “We just feel like we were chosen to be their parents. They’re not a burden. They teach us things. God chose us. I don’t know why, but we’re very blessed. I just want to do more for them.” 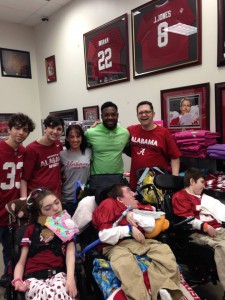 Drake, Kristofer and Grace are each in wheelchairs. The family’s home off Brewster Road includes 17 stairs from the main floor to their bedrooms. Charles McCown is a senior programmer and Julie McCown takes care of the kids. Affording necessary home renovations is nearly impossible on one income. The money raised at Saturday’s autograph signing — $1,000 — will go toward home renovations to make it more accessible for the children. There is also a donation page set up at www.gofundme.com/ody0fo for the family.

“It could not be more wheelchair inaccessible,” Julie McCown said of their home.

Julie McCown said Grace is the only child of the three she can get into the bathtub. She can’t get Drake or Kristofer through the doorways.

“We need accessibility,” she said.

Sims said he found out about the McCown family through his marketing company. He said it was a big deal to give back and show support for the family.

“I didn’t hesitate to say yes,” Sims said. “I’m just happy to be here and be in the state of Alabama.”

Reaves said Collegiate Warehouse’s owner asked him if he wanted to be a part of the event. He said yes.

“I will continue to do stuff like this, give back to the community, give back to people who helped get me in the position that I’m at,” Reaves said. “That’s something I want to be big on. It’s more than just football to me. I just want to try to help people reach their goals and try to do whatever they’re trying to do, just like my parents and others helped me get to where I’m at now.”

Julie McCown said “there are just no words” to describe what the event meant to her and her family. She wants to be able to get Drake and Kristofer into the water so they can feel it.