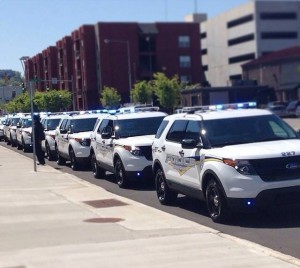 Authorities crack down on roadway texting

MONTGOMERY – Texting while at the wheel has become a growing problem, and law enforcement agencies intend to break the cycle.

A national campaign called “U Drive. U Text. U Pay.” will go into action this Friday. For five days, authorities will use a combination of inventive and traditional tactics to crack down on those who choose to text on the roadways.

“Not only is driving and texting irresponsible, but it is illegal,” said Col. John E. Richardson, director of the Alabama Department of Public Safety. “People who break Alabama’s texting law will be stopped and fined. It’s simple: if you drive and text, you will pay.”

How much does a violation cost? A first-time offender is fined $25. The fine doubles for the second offense and jumps to $75 for the third or more violations. Alabama’s texting law went in to effect in August 2012.

The law only prevent drivers from utilizing text-based communication on their phones, not dialing or retrieving numbers for the purpose of a phone call.

“Some people may say texting while driving is an epidemic,” Richardson said. “Well, we believe enforcing our state’s texting law is part of the cure.”

According to a 2014 New England Journal of Medicine article, the risk of a crash or near-crash among novice drivers increased with the usage of many secondary tasks, including texting and dialing cell phones.

The U.S. Department of Transportation has funded approximately $8.4 million to the “U Drive. U Text. U Pay.” national campaign.