JEFFERSON COUNTY — The Jefferson County American Federation of Teachers group on its Facebook page has offered an alternative plan to the one the Jefferson County Board of Education approved last month, a plan that will result in the net loss of 162 jobs.

According to the April 11 Facebook post, Jefferson County Schools Superintendent Craig Pouncey asked the American Federation of Teachers to present a plan at the board committee meetings Tuesday morning. 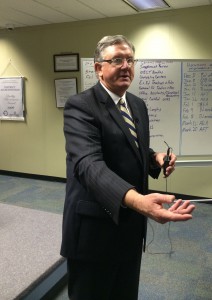 “I am not convinced we are in such a dire financial situation,” the AFT’s Facebook post states.

1. Rescind Pouncey’s plan
2. Have an outside auditor tell how good or bad the finances really are
3. Have a financial committee work out a solution
4. Call for Chief School Financial Officer Sheila Jones’ resignation

The board in March approved Pouncey’s plan to reduce the system’s workforce to save $12.6 million per year. The approval passed on a 3-2 vote, with Board President Dean Taylor and Jacqueline Smith voting no.

Read more about that meeting here.