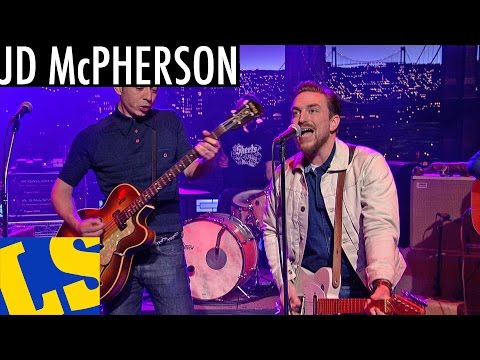 Given his musical style, you could argue that JD McPherson was born about 30 years too late. The Oklahoma native has managed to put a fresh spin on retro-sounding rock and roll, avoiding any trappings of tribute or parody. On Thursday, April 16, McPherson will return to Birmingham for a performance at WorkPlay. Currently, he is on tour in support of Let The Good Times Roll, the follow-up to his acclaimed 2012 debut album Signs & Signifiers. Recently, McPherson spoke to Weld by phone from his Oklahoma home.

Weld: JD, thanks for your time. Your music has a timeless quality, steeped in rock, blues and rockabilly. Is it a conscious thing or is it a natural outpouring of all you’ve absorbed? How would you describe your creative approach?

JD McPherson: I think it’s definitely a melting pot of all the stuff that I like, that’s for sure. It is a conscious thing — you don’t just accidentally end up with a Fender Pro Circuit amp and an upright bass. It’s definitely a labor of love. Starting with the earliest aspects of rock and roll, it’s the most fun music you can possibly play and I use it as a palette to write songs. I’ve been doing it for a very long time and I still find new things you can do with it. I think it’s important to celebrate that stuff and not let it fade.

Weld: Tell us about the writing process for Let The Good Times Roll.

JM: One or two of [the songs] had a skeleton of the song [leftover from the previous album]. On “Bridge Builder,” I had a verse for it but I couldn’t figure out what to do with it. I have a hard time writing on the road — I have to sit down and commit and have a mess of papers around me. I can’t work under clean circumstances.

Weld: I see that you’re joining Robert Plant for some tour dates this year.

JM: He’s having us out for a week of shows on the West Coast. I’m so stoked for that, man. I flooded my aunt and uncle’s bathroom one time because I left the shower on while I was finishing one side of Led Zeppelin III on my Walkman. I’ve been a huge Led Zeppelin fan since I was a kid, so I can’t believe it. I’ve really liked his solo stuff and his stuff with The Honeydrippers. He’s got enough material now to make Led Zeppelin fans happy and his new fans happy.

Weld: What does the remainder of 2015 hold for you?

JM: We’re going to be really busy this year. We did a really long tour of the East Coast along with Chicago and Minneapolis. We’re doing [English music festival] Glastonbury this year and a Rock festival in Spain with ZZ Top, L7 and Eagles of Death Metal. [Europe] has always been a very strong place for us, especially in Spain. Their fans are so stoked about rock and roll of all kinds.

Weld: Given your musical style, I would assume that you have a wide range of ages in your audience. Is that a fair statement?

JM: Yeah, it really is and people remark on that quite a bit. There is a very broad age spectrum at the shows and we’ve got a lot of kid fans, too. If it starts going south, I can always make a kids’ record.

JD McPherson will perform at WorkPlay on Thursday, April 16. Doors open at 6:30 p.m.; the show begins at 8 p.m. Tickets are $15. For more information, visit workplay.com.