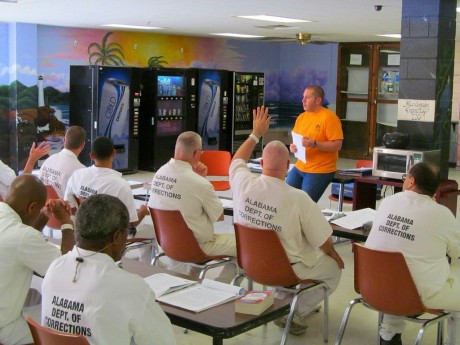 Instructor Joseph Lucido draws a question from one of his students during a morning session of the college-level course, “Analyzing Different Medias in American Culture,” at St. Clair Correctional Facility. The course is one of a number offered in the state  prison system by the Alabama Prison Arts + Education Project (APAEP), a program launched in 2003 which now is based in Auburn University’s Department of Human Development and Family Studies in the College of Human Sciences. Photo by Tom Gordon.

Last Thursday morning, Dewayne Estes stood at the rear of the visitation room at St. Clair County Correctional Facility. Estes has been the high-security prison’s chief warden since March. He also has been with the Alabama Department of Corrections for 32 years and tends not to look at the prison system, its inmates and employees, through rose-colored glasses.

Estes was wearing clear spectacles during the morning of a media event at St. Clair. In front of him, wearing their prison whites and seated at desks, were 14 male inmates of various ages, six of them white, eight of them black. They were in a discussion with their instructor Joe Lucido on a sports-themed article they had read for Lucido’s class, “Analyzing Different Medias in American Culture.”

Estes supports classes like Lucido’s. In a perfect world, he and corrections officials would have more of them.

The class is one of the current college-level offerings to inmates at St. Clair and seven other prison facilities in the state through the Auburn University-based Alabama Prison Arts + Education Project or APAEP. Some of the students in the morning class hope to be out in a few years; others, sentenced under the state’s habitual offender law, will be in prison for the rest of their lives. All of them, however, enrolled in the class on their own volition.

Veteran corrections officials like Estes have seen people leave the prison system, give seemingly heartfelt testimonials about how they’ve changed for the better, and end up back inside because they could not hack it on the outside.

Given that fact, and given that the number of inmates in St. Clair is nearly 300 more than the 984 the facility was built to hold, it is easy to ask a cynical question, what good does a class like this do?

Good can be defined in a variety of ways. In the 12 years that the Prison Arts + Education Project has been operating in the Alabama system, inmates have learned to draw, compose short stories and poems, grasp engineering concepts, solve math problems and gained confidence in their ability to do college work. Anecdotally, one said he has heard that the courses have helped some of his former prison colleagues on the outside, and others who will never get back outside still find they can look forward to the classes, that the ideas, concepts and homework give them more to do than idle in front of the TV and give them the satisfaction of seeing their work published in the anthologies that the Arts + Education Project publishes every two years.

One of the inmates interviewed at the media event said the classes also enabled him to assert something:  his humanity, to let people know there is more to him than just his criminal past.

“A lot of them come from challenged backgrounds,” Estes said of the students, “and it’s just an opportunity for them to see and experience different things. And who knows when they’ll have that ‘Ah-ha’ moment? That’s what we’re all looking for is an ‘Ah-ha’ moment when they go, ‘Oh my God, I need to change.’”

Estes said there’s really no way to know how much classes like those from the Arts + Education Project might have contributed to someone succeeding on the outside. “But if we touched one,” he said, “it was worth it all.”

APAEP started touching lives in 2003. Since then, according project founder and director Kyes Stevens, the initiative has offered more than 200 college-level classes totaling more than 5,000 hours to more than 2,500 students, and that 2,500 figure includes individuals who have taken multiple classes.

Part of the Department of Human Development and Family Studies in Auburn’s College of Human Sciences, the project has operated mostly on grants totaling more than $1.1 million, and donors have given it 19,000 books. In the current semester, Stevens said the project has 10 classes at prison facilities around the state, ranging from tough places like St. Clair and Donaldson Correctional Facility in Jefferson County to Julia Tutwiler Prison for Women and its annex.

“There are wardens who would like for us to be at their facilities,” Stevens said. “They want us there offering classes. We do not have the economic means to get there. We pay our teachers. They don’t get paid a lot but you know, facilities in Alabama are not exactly conveniently located…so it takes some driving time to get to these places.”

In conversations, Stevens, a poet whose opportunity to teach a grant-funded course at the federal prison in Talladega gave her the idea for a larger prison-focused arts and education effort, always refers to the inmates as students because they constitute another learning community.

Seated at one end of the first row of students facing Stevens was Christopher Hawes, a 38-year-old from the Elmore County town of Tallassee, serving life without parole for capital murder. One of three inmates selected at random to speak to the media, Hawes said that among other things, the classes have helped him learn to draw and to write creatively. In Wished the Distant Lights, an Arts + Education anthology published in 2014, Hawes has a historical essay on the fate of the Creek Indians in Alabama. In it, he wonders what might have happened if Native Americans had told Christopher Columbus to not come ashore in 1492.

“I think about where this country is today — the laws they make telling people we don’t want you here unless we say it’s OK,” Hawes writes near the ironic end of his article.

“We’ve all got something in common,” Hawes said of himself and his fellow students in Lucido’s class. “We’re wanting knowledge. We’re wanting something better for ourselves and thankfully, Kyes and her teachers offer that to us.”

Karen Carter, another of St. Clair’s wardens, has yay or nay power as to who gets in the classes. Carter puts the notice of an upcoming class in the prison’s newsletter, then reviews requests from inmates who want to attend. Normally, with limitations on space and supplies, the classes consist of about 20 to 25 students. Carter says she typically receives 50 to 60 applications.

“If they’ve had a disciplinary or any kind of citation within the last year, then I won’t put them in,” Carter said.

Asked if she thought the classes, which do not count for college credit, have had any kind of ripple effect on the prison’s overall population, Carter said she did not know.

“But it will definitely have an effect upon any individual who has any upward mobility in their mind, thinking that this will help them, because they…get a certificate at the end of this and this is placed in their file,” Carter said. “So this will help them if they come up for parole. They (the state Board of Pardons and Paroles) look at anything that’s productive and positive.”

All the class certificates in the world will not help John Johnson get out, but he says they still have put him in a better place. The 65-year-old inmate, who is doing life without parole for burglary because he was subject to the state’s habitual offender law, has fashioned a self-portrait that now hangs in his brother’s home. He has a poem in the 2014 anthology, too. In remarks to the media, he said what he has learned has helped him to assert his identity as “an aged human being,” put a past tense on his criminal conduct and forge stronger bonds with his family.

“I am not going to be locked into the identity that I am nothing but my past and my criminal behavior,” said Johnson, who has called Birmingham home.

“The voice that I have is the voice of many other people in prison,” Johnson said. “There are people that are locked up today that have spent a considerable amount of (time on) introspection, but you can’t just sit around and think that this is all that there is. There is more, and being able to communicate, say, to your family, is one of the key parts, I believe, of being alive. Everyone wants to be recognized. … Everyone wants some form of self-image to be something of hope and progress to a better tomorrow.”

Hope and progress can seem like hollow words in a prison system that is woefully underfunded — “a challenged budget” is how Estes describes it — understaffed and overcrowded, and that system may very well come under the stern gaze of a federal judge if the state legislature does not take steps to change those conditions. A massive bill to lower the prison population, boost its resources and bed space is in the legislature now, and its ultimate fate is uncertain.

Stevens, who as part of her Arts+ Education Project work has spent time in prisons all over the state, says it will take a multilayered approach to keep people from returning to a cellblock after they get out, and educational programs can be part of the mix.

“We have to offer educational programming, we have to offer re-entry, we have to offer job training, we have to have a structure that helps people find employment when they get out, we need parole officers that are not so completely overwhelmed and taxed by their client load that they can’t meaningfully connect with people, right?” Stevens said. “There are all kinds of things that need to happen.”

Meanwhile, with grants, donations and other means, Stevens and her fellow teachers will continue working with their imprisoned students and coaxing from them the sentiments like those that took shape in inmate Mary Jackson’s published prose poem, “Freedom.”

“Freedom is taken for granted when you’re able to walk down a street, wind, the soft whispering wind blowing through your hair and everyday responsibility knocking at your door,” Jackson writes. “ … The ones that deserve the chance, but rarely get the chance to stay out of prison, we can afford the responsibility of freedom.”

In the hallway outside the temporary classroom, exhortations in big block letters lined the walls. One of them seemed fitting to what had just happened in that classroom.

“Each day give something good to others,” it said.