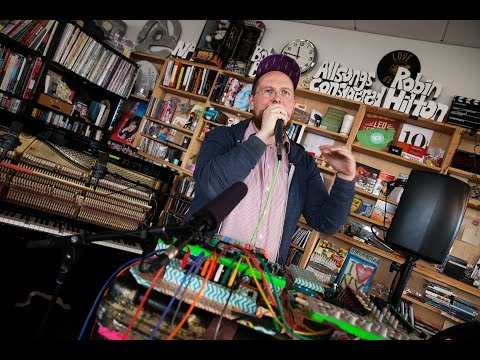 If Dan Deacon is difficult to interview, it isn’t because he’s unfriendly. The 33-year-old electronic musician speaks about his music with a contagious, starry-eyed excitement. He uses the phrase “it blew my mind” a lot. After just ten minutes of hearing him talk, it’s not difficult to see that this is the artist behind the shimmering ebullience of his 2007 breakout Spiderman of the Rings, or the pulsing psychedelia of his latest release, this year’s Gliss Riffer. When I make a statement about the latter album that he doesn’t fully agree with — that it’s arguably a more lighthearted effort than its more ponderous predecessor, 2012’s America — he’s quick not to be dismissive: “I don’t think so. But that’s how you perceive it, so that’s true for your reality.”

But for Deacon, who will be performing at WorkPlay on April 19, that friendly energy also manifests as perfectionism. Throughout our conversation, he pauses frequently to check on rehearsals for the show he’s performing the following night, which happens to be the first show of the tour. Things don’t seem to be going too well, and given the typical intricacy of his live sets, which rely heavily on complex lighting setups and plenty of audience involvement, his distraction is understandable. “Whenever I have to do these interviews in the middle of rehearsal, my brain is just [expletive] chaos,” he laughs.

Deacon sees Gliss Riffer as a way of exploring that mental chaos. While he sees America as the record about exploring his relationship with his country — “I felt disenfranchised as an American,” he says, “but isn’t that what being an American is?” — Gliss Riffer “was much more about me trying to figure out why I was so stressed out all the time and why I constantly try to get out of my own head.”

“I have such an insane relationship with trying to relax,” he says. “I feel like [making the record] really helped me figure out what my neuroses were.”

He was inspired, he says, by a Bill Murray interview from the Toronto Film Festival, in which he explained his philosophy that artists do their best work when they are very relaxed.

“That blew my mind,” Deacon says. “I was very stress-motivated and very wait-until-the-last-minute. And that’s an insane way to live, that’s an insane philosophy to have be your main workflow. I’m glad I abandoned that.”

To make Gliss Riffer, Deacon stepped back from the large scale of America — which featured orchestral instrumentation — and returned to the solo approach that had defined his earlier work.

“After America was done and I was starting to write new music, I started working on a mixtape called Wish Book,” he says. “I was just dragging files into [music editing software] Ableton and chopping them up. And I remembered, ‘This is how I used to make music! When this is done, this is done. I don’t have to add brass to the mixtape. This thing is complete! And it really blew my mind in a weird way because I hadn’t made music like that in a long, long time.”

Deacon continued working on the album as he went on tour with Arcade Fire last year. Though he was originally supposed to be mixing the finished album as the tour started, he ended up “rewriting certain parts,” and re-recording part of the record.

“It was a real turning point for the record,” he says. “It was about to be done, [but then] I just kept tweaking it and changing it.”

“EDM is such a specific type of music,” he sighs. “It’s like if I played guitar, and people called me a rock band, but I didn’t play rock and roll.”

“I’d say my electronic music is more informed by krautrock and the Talking Heads and Brian Eno than it is by Aphex Twin,” he says, referring to the electronic music pioneer who is considered a major influence of many EDM artists. “I never really listened to that. I still don’t. I think it just wasn’t to my tastes. It’s obviously super important, but I never listened to it growing up so it never really had a big impact on me.”

When the conversation turns to the influence of psychedelic aesthetics on his music, Deacon grows thoughtful.

“I feel like psychedelia is really misunderstood,” he says. There’s a pause, and then he asks, “Do you ever stare at a painting and have a wash of dread come over you, and you imagine having your consciousness reside in that painting?”

He trails off, and the other end of the line grows silent for a long moment — a pause lengthy enough to serve as an unwittingly ominous epilogue to his question.

Then Deacon returns to the phone, apologizing for cutting the interview short — rehearsal is falling apart, he says, and he need to dive back in. After a few sincere apologies, he hangs up, leaving his question of misunderstood psychedelia hanging in the air like a koan.

He’s able to salvage the rehearsal — reviews of his first shows on the tour have been positive — and worrying about what he was going to say before he was interrupted seems contrary to Deacon’s newfound philosophy of relaxation.

“What are they talking about?” he asks on “Mind on Fire,” a track from Gliss Riffer. “No sweat.”

Dan Deacon will perform at WorkPlay on Sunday, April 19. Prince Rama will open. Doors will open at 8 p.m.; the show begins at 9 p.m. Tickets are $16. For more information, visit workplay.com.