Trussville out to bid on ‘big improvement’ to Pine, Poplar streets

TRUSSVILLE — The Trussville City Council last week approved of going out to bid for sidewalk installation from Pine Street to Poplar Street along Chalkville Road, and from Poplar Street to Parkway Drive.

The work will also include roadway repositioning of a portion of Poplar Street. 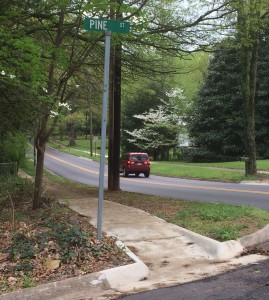 A sidewalk already extends from Oak Street to Pine Street along Chalkville Road in Trussville.
photo by Gary Lloyd

Melton said he hopes the work can be done once school is out and be completed before the start of the 2015-2016 school year in August.

Melton said that once the sidewalk construction is complete, he hopes to have an entrance sign placed at the intersection of Poplar Street and Chalkville Road, a sign that welcomes people to the Cahaba Project. He said he has a rendering of what it will look like.