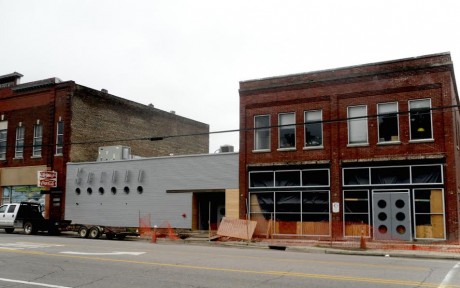 Saturn and Satellite under construction. Saturn (left) will serve as a music venue and will open on May 1, while Satellite (right), a coffee shop and bar, is expected to open slightly earlier. Photo by Sam Prickett.

Brian Teasley has been fascinated with outer space from a very young age. He grew up watching science fiction B-movies. His grandfather and great-uncle were engineers on NASA’s Saturn V project. And Man or Astro-man? — the psychedic surf rock band Teasley co-founded in the early 1990s — built its image and sound around a tongue-in-cheek, retro-futurist aesthetic.

Outer space is also a prominent theme of Teasley’s latest endeavor: Saturn and Satellite, a new bar, coffee shop and music venue that Teasley plans to open in Avondale on May 1, also draws heavily on sci-fi imagery, from the venue’s sleek, corrugated-metal exterior to the smaller touches inside, such as an air conditioning duct built to resemble a rocket or bathroom signs featuring aliens instead of stick people.

The cosmic scope of Saturn and Satellite’s imagery is in some ways reflective of the venue’s ambitiousness. Ostensibly, the business could be seen as two distinct ideas: Saturn, the venue proper, is where the live shows, booked by Atlanta-based concert promoter the Bowery South, will take place and features its own bar; Satellite, meanwhile, will serve as a coffee shop in the morning and early afternoon before transitioning into a bar in the evening. But for Teasley and the team behind the venue, which consists of general manager Carl Ratliff, bar manager Steva Casey, coffee manager Camille Autry and venue manager Charlie Smith, the two aspects of the venue will be complementary.

The venue is so dynamic, says Smith, that someone could realistically spend an entire day there.

“We really hope somebody can come in, start out their morning with us and get some work done,” she said. “As the day goes on, they can put their computer away and have an evening cocktail with us. And as the night comes, they can move from the coffee shop to the venue and enjoy a good rock show.”

While customers will be able to spend their entire day at Saturn, artists who perform at the venue will be encouraged to spend the night there as well. The second floor of the venue —located over the coffee shop — features accommodations for artists, including a master bedroom, common area and kitchen. It’s an aspect of Saturn that Teasley says was inspired by communal venues he experienced in Europe while touring with Man or Astro-man?.

There’s also, he admits, a sense of Southern hospitality that continues from the recently defunct Bottletree Café.

“A lot of the spirit of how we want to treat bands and patrons is something that grew out of the kind of hospitality we had at Bottletree. Honestly, [that venue] was a huge inspiration for this,” Teasley said.

But Teasley, who co-founded the Bottletree in 2006, is adamant that Saturn not be seen as a replacement for that venue, which closed in March.

“I don’t think anybody’s ever going to be able to replace what Bottletree was,” Smith added. “As somebody who worked there for a very long time, that place was so special to me. We’re not trying to replicate what that was. I don’t think anybody could disagree that Bottletree was [instrumental] in changing Birmingham’s music landscape. We’re just trying to build on what it started and founded in the city.”

With a capacity of about 500 people, Saturn is twice the size of Bottletree, though Teasley believes that there will be no less intimacy for smaller shows.

“I feel like we have to be two different clubs at once, in the sense that we have to be able to have 80 people in there for a local show and have it feel comfortable and also be able to have a Built to Spill show for 500 people,” he said. “We have two elevated side areas that we can close off. We have a lot of tables we can put in there, and eventually we’ll probably be putting in some kind of retractable wall or curtained-off area so we can close the room down to basically the size of Bottletree.”

The influence of Bottletree on Saturn extends to Teasley’s aspirations for its role within the community. Teasley lives within walking distance of Saturn and Satellite, and said that he hopes the venue will help with Avondale’s growing role as a cultural hub within the city.

“When Bottletree started in 2006, there was really nothing of a restaurant or entertainment district element down here,” Teasley said. “It’s important for me to continue as part of that growth and make sure that it grows in the right way, because I am a resident here.”

“Success as a venue is a real abstract, and having something that touched people’s lives, something that will stay with them their entire life, is more of a success than making money,” he continued.

Saturn’s engagement with its surrounding community ties back, surprisingly, to its theme of outer space.

“[The space theme] was just a good way to tie everything back to Birmingham that wasn’t necessarily another play on steel or iron,” said Smith, noting one prominent connection between the city and the cosmos: legendary musician Sun Ra.

“Sun Ra, who I believe was one of the most creative people to ever live, was from Birmingham via Saturn,” Teasley added. “He later disassociated himself from ever having been from this world, [but] it’s pretty amazing that someone with the highest levels of ingenuity and spirit came from Birmingham, just down the street for us.”

On May 30, less than a month after its opening, Saturn will host the Sun Ra Arkestra, which features many original members of Sun Ra’s band who continued after Sun Ra’s death in 1993.

Having the band play the venue is “like getting excited for Christmas morning and having a real Santa Claus with reindeer show up on your roof,” Teasley said. “It’s as much of a cosmic gift as it possibly could be for them to play here. It’s almost like a blessing from the galaxy, that they’re going to bless our club for being here.”

The stage at the Saturn venue, under construction. Photo by Sam Prickett.

In addition to hosting a wide variety of artists, Teasley hopes to accomplish something unique with Saturn by turning the venue itself into a musician. Inspired by a Brooklyn art installation by Talking Heads frontman David Byrne, Teasley has installed sensors throughout the building that are programmed to trigger ambient sounds.

“Think about a more abstract version of a keyboard, where instead of pressing a key, you have somebody walking by and a light sensor picking it up,” Teasley said. “Or how much light there is in the room causes an ambient sound to trigger. Water flowing through the pipes, weather, movement — if a car drives by outside, there will be an ambient whoosh.”

With help from the Octopus Project, who will headline the venue’s second night, Teasley hopes to have a beta test version of the sensor system ready by the end of the venue’s first week. Teasley and Saturn’s recording engineer Daniel Farris eventually hope to piece together the sounds and “actually have the venue put out its own record.”

“It’s a fun idea, and it’s cool to attempt to do something artistic with the venue,” Teasley said. “That kind of [expletive] keeps it fun for me.”

Saturn Birmingham will host its first show, featuring free performances by Mother Falcon, Dead Fingers and Helen of Coi on May 1. Satellite is expected to open by the end of April. For more information, visit saturnbirmingham.com.