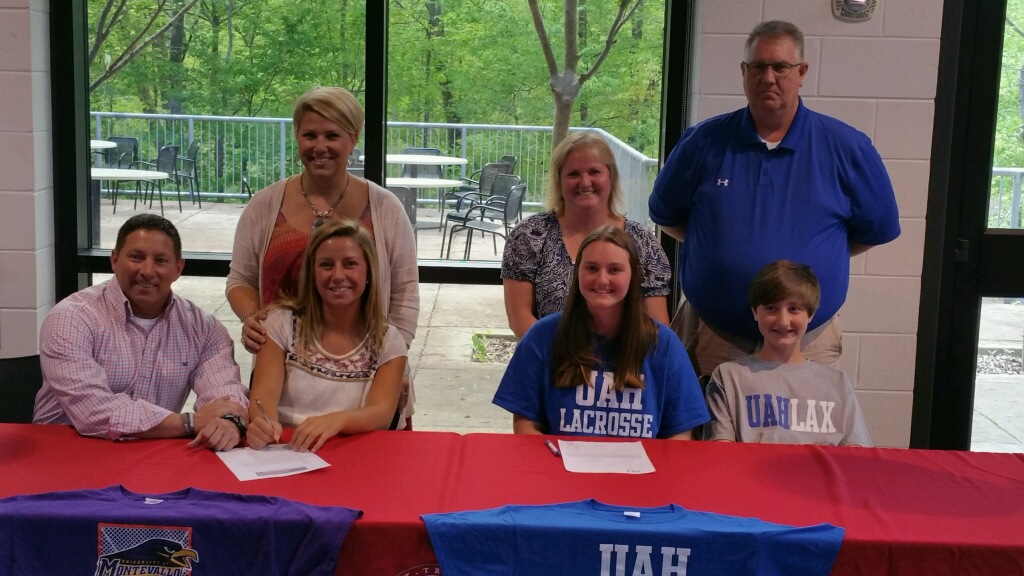 TRUSSVILLE — The quickly trending sport of lacrosse commenced at Hewitt-Trussville High School only a year ago.

That’s why Alex White and Kally Bradford smiled so wide last Monday in the Cahaba Café. With parents, coaches and peers standing witness, White and Bradford trail-blazed a path for future Huskies, a path neither athlete could’ve imagined at the dawn of last spring.

With pens in hand, the two seniors proudly carved out their names on national letters of intent, becoming the first two Hewitt-Trussville lacrosse players to sign athletic scholarships.

“I never thought I would be playing a college sport so I’m so excited that I am, (and) I can’t wait for it,” Bradford said. 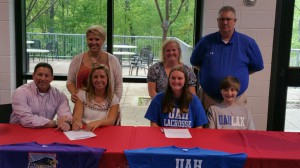 “The college coaches said they had really good lacrosse IQ, which is a big thing that means that they know where to go and do the right things,” said Hewitt-Trussville girls’ coach Tom McCormick.

This time last year, both girls were at the welcome conclusion of a bitter 0-11 season. It was the program’s first step in the growing sport, and it was a doozy.

“I don’t know how we got to come this far,” White said. “We’ve improved so much and we have so many new girls on the team this year and we’ve come so far as a team and as a family really.”

White’s first experience with a lacrosse stick came shortly before the team signup at a camp in Trussville. Her experience was comparable to a newborn deer’s unsure stride.

“I could not even catch a ball,” White said. “I couldn’t pick up the ball off the ground with the stick. It was so hard with the stick in my hand for the first time.”

After many hours of offseason work, that once foreign object has now become an effortless offensive tool in her hands. She had already scored 17 goals and dished out five assists in eight games as of last week.

“Alex (White) probably practiced more than almost everybody on the team combined,” McCormick said. “She would go home and practice after we’d practiced for three hours. She would go take a shower and go practice again.”

While White serves as an offensive leader, Bradford brings a calm confidence to the defensive end of the field. McCormick sees the senior as a natural leader.

“(Bradford) has a job and a little sister that she helps with, so she already is kind of a leader, even though she doesn’t try to be, and the girls all come to that,” McCormick said. “She’s not a person to blame people, she’s more of a motivator and that really helps.”

Much like the offense, Bradford and the defense have seen a great spike in production this year. They allowed 12 or more goals in all but two games a year ago. Only three opponents have reached that total this time around.

Bradford has grown to embrace her defensive duties and hopes to continue her growth as a college defender. She leads the team in ground balls and averages three interceptions per game.

“I love being a defensive player,” Bradford said. “I like getting aggressive, being rough and beating some girls up.”