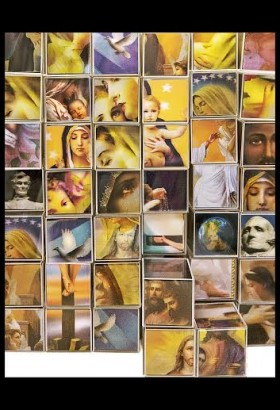 In the flea-markets of Romania, there are bedsheets spread out, covered with layer upon layer of aged photographs and identity cards. Pictures and personal information that have been hidden away are now flooding into the public view, finally released years after the fall of the country’s communist regime. When American artist Karen Graffeo came across the documents during her Fulbright appointment to Romania, what she found was inspiration.

Space One Eleven’s upcoming exhibition, Negotiated Identities/Saints and Tears is the culmination of that inspiration. Featuring works by Romanian and American artists, the exhibition is an exchange of art that highlights the common struggles faced by both countries, as well as the cultural differences between them.

“The identity cards became a visual and conceptual focus for this exhibition,” wrote Graffeo.

During the communist era in Romania, she explained, identity cards were kept at police stations, and were required for anything from attending a university to getting a job. Any citizen who wanted to use his or her identity card first had to be evaluated to see if they had “paid their dues” to the Communist Party.

“You really had to negotiate for your own identity,” said Graffeo.

The collaborative project is the result of discussions between the artists, which touched on a number of issues, including communism and authoritarianism.

“Romania coming out of the authoritarian rule of Nicolae Ceausescu in 1989 and America both face common issues,” wrote Graffeo. “The exhibition portrays our discussions about common cultural issues and differences.”

The art in the installation ranges from visual art, such as photography and sculpture, to performance art, including video. Using documents from both Romania and America, the artists combined iconic imagery with their own work to create something entirely new. The result, as suggested by one of the Romanian artists, Dorel Gaina, was “a new nation,” which Gaina dubbed “RoAmerica”.

According to Károly Feleki, the Romanian curator, Romania is in a situation where its citizens “receive and take myths generated and managed by the American life style.”

He wrote, “The challenge, the project and the exhibition that Karen Graffeo offered and proposed gave me the opportunity to also propose something to America in return.”

Graffeo hopes that the exchange will bring to light certain issues faced by both Romanians and Americans.

“The level of artistry and the work stands alone as a visual experience,” said the artist, “but as a cultural exchange, I think it’s a real opportunity to consider issues related to personal dignity, healthcare, economic and political choices, as it affects the individual.”

The exhibition will also feature pieces by American artists Gary Chapman, Anne Murray and Stephanie Baugh, and Romanian artists Alexandru Radelescu, Diana Dragen-Chirila and Eugen Moritz. Negotiated Identities/Saints and Tears will be open for viewing May 1 to May 22 and will offer visitors a glimpse at “the New RoAmerica” that the artists created as a result of Graffeo’s vision. As Gaina wrote, “Karen Graffeo brought us a gift — America, hers and ours as well.”

Negotiated Identities/Saints and Tears will be on display from May 5 to May 22 at Space One Eleven and is free to the public. The gallery, located at 2409 2nd Avenue North, is open from 10 to 5, Tuesday through Friday. The opening reception will be held on Friday, May 1 from 5:30 to 7:30. For more information, go to spaceoneeleven.org.