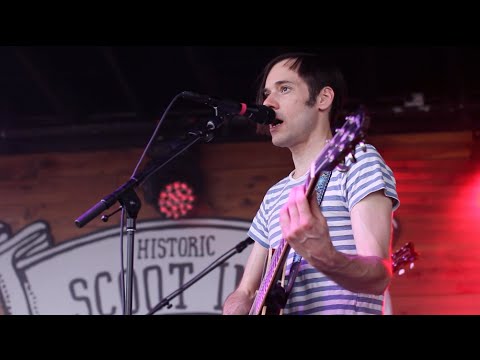 Posted By: Online Editoron: May 03, 2015In: Weld for Birmingham
Print Email

Kevin Barnes has little use for retrospection. As the frontman of the Athens, Ga.-based psychedelic rock band Of Montreal, his career has been defined by constant forward momentum. Over the course of 19 years, he has released nine EPs and 13 full-length albums, adopting and shedding musical styles and theatrical stage personae with chameleonic abandon. The band’s latest record, Aureate Gloom, was released in March; Barnes is already working on the follow-up.

Of Montreal’s prolific output can be attributed to Barnes’ therapeutic approach to songwriting.

“I get through things by writing about them,” Barnes said, speaking ahead of Of Montreal’s May 8 show at Zydeco.

His writing style, he says, is more about capturing his emotions than reflecting upon them.

“Often, my perception of the thing I’m depicting is in a transitional phase, so there’s no resolution while I’m writing,” Barnes said. “That state of imbalance is captured on the records, but it doesn’t represent where I eventually end up. It just represents who I am in a state of turmoil.”

For Aureate Gloom, a record that Barnes describes as “very autobiographical,” that turmoil came from his separation from Nina Aimee Grøttland, his wife of 12 years. The upheaval in his personal life “influenced some of the more chaotic and aggressive parts of the record,” he said, although the songs on the record are far from his final feelings on the subject.

“When I look back on songs that are about certain people or certain events, I think, ‘Well, I wasn’t very charitable about that,’” Barnes said. “Or I think, ‘No, I don’t feel that way about that person. I can see a different side of it and I wouldn’t be so critical of them anymore.’

“In the moment, it is just very visceral and immediate and raw. So basically, I need to write follow-up songs to all my songs. But I don’t know if I have the energy to do that.”

Aureate Gloom is full of that raw, unchecked emotion, though that rawness is filtered through Barnes’ characteristic hyper-literate lyricism.

“In mock celebration of our centipede plague raving / We set the stables into porphyrian flames,” he sings to Grøttland on “Monolithic Egress,” the album’s sixth track. Though the lyrics might seem impenetrable, Barnes argues that they are based on identifiable emotions.

Kevin Barnes. Photo by Chad Kamenshine/courtesy of the artist.

“I think everything you could possibly write would be very simple and universal,” Barnes said. “There’s nothing you could really feel that you’d be alone in feeling. For the most part, at least. A few people are just truly, truly out there, but there aren’t that many people who are that special. Most people, like myself, are pretty normal. So how do you write about normal things in a way that’s not just mundane and sentimental and cliché?”

“I try to have my own voice, my own style of expressing things,” he continued. “It can seem a bit obtuse and not direct or whatever, but I think that’s good. There are enough people writing direct, universal songs.”

Barnes’ writing style, like the rest of his career, remains in a constant state of evolution. Over the past two years, he says, he has worked to integrate poetic influences into his lyrics, such as on 2013’s Lousy with Sylvianbriar, which was heavily influenced by 20th-century poet Sylvia Plath.

“I read this review a while back of one of our records, and the reviewer described a lyric as ‘almost poetic,’” Barnes said. “How do you come close to being poetic [without being poetic]? I guess if it’s something that someone would never say, it’s poetry. But if you might actually say it in a conversation, then it’s not poetry anymore, maybe?

“I think that in general, that’s the thing, to strike the balance between being too flowery or being too intellectual [and] not using language that’s too simplistic or quotidian or something.”

For the musical side of Aureate Gloom, Barnes was inspired by New York’s punk scene in the 1970s, which struck a different sort of balance.

“That period produced so much great art and poetry,” Barnes said. “New York in the 1970s was a very dangerous, dirty space, at least in the areas where these young people were hanging out and starting the music scene and developing their work. It’s easy to romanticize that. People were living in slums, but focusing on their art and still having a sort of glamorous side. Even though they were terribly broke and everyone around them was terribly broke and there was no real reason to think that they could ever pull themselves out of it, they [made music] anyway. That’s inspiring.”

Aureate Gloom’s sound takes notes from bands of that era, such as the Talking Heads and Television, but also continues Barnes’ fascination with explorations of chaotic, dissonant noise that influenced the band’s 2012 LP Paralytic Stalks and which plays a large role in the Aureate Gloom track “Cthonic Dirge for Uruk the Other.”

“Often I’m attracted to hooky melodies, but more often I’m interested in exploring noisier kinds of music and being immersed inside of that chaos,” Barnes said. “It’s fulfilling to make music like that. I think I’ve probably listened to the Beatles too much to go full noise, because I always want there to be beauty, too much beauty and not enough ugliness.”

The difficulty of translating those noisier tracks to a live setting has crossed Barnes’ mind, but doesn’t seem to bother him too much.

“That’s sort of a challenge in the back of my mind,” he said. “I’m thinking, ‘Well, I could make this kind of song, but would we ever play it live?’ And sometimes I’m more concerned with that than with others. I’ll just say, ‘I don’t care,’ and not worry about the future of the song.”

That focus on the present has defined Of Montreal’s career, which will reach its 20th anniversary in 2016. Characteristically, Barnes is apathetic about the milestone.

“I don’t care, really,” he said. “I don’t keep track of the years, and I try not to carry the memories with me very much. When I’m an old man, maybe I can think about those things. But now I just want to keep moving forward and not look back and definitely not pat myself on the back or anything. I feel so excited about what I’m doing right now.

“Abandoning everything from the past is just the way I work, so the process of collecting years and pinning them to the wall and celebrating them is just not the way I operate,” Barnes said. “So there will be no party!”

Of Montreal will perform at Zydeco on Friday, May 8. Icky Blossoms will open. Doors will open at 7 p.m.; the show begins at 8 p.m. Tickets are $18. For more information, visit zydecobirmingham.com.