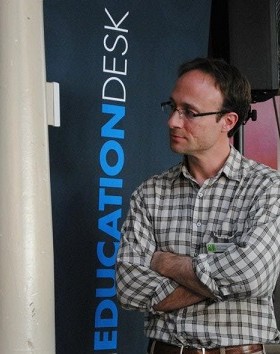 Posted By: Online Editoron: May 05, 2015In: Weld for Birmingham
Print Email

Birmingham’s National Public Radio affiliate WBHM, 90.3 FM this week has taken on a topic which matters more and more as the number of students from other countries rises in local schools: how should those students be taught?

Dan Carsen of the Southern Education Desk looked at some of the challenges facing teachers, administrators, and students among others in his series “Language-Minority Education In The South.” The four-part series began airing Tuesday May 5 on WBHM and sister station WSGN in Gadsden during Morning Edition and in the afternoon on All Things Considered.

Carsen produced the series with the help of a fellowship from Renaissance Journalism’s initiative, “The Equity Reporting Project: Restoring the Promise of Education.” He talked about why longstanding teaching methods may not be getting the same results in this new environment.

Weld: Why did you decide to do this series?

Carsen: I was at an Education Writers Conference last spring when I was approached by a journalist with connections to the Ford Foundation and Renaissance Journalism — the people who’ve funded and put together the fellowship that brought about the series. He asked me if I was interested. It sounded like good, important work, and in many ways similar to what we already do at the Southern Education Desk. My superiors at WBHM were excited at the prospect, so I agreed and here we are.

Originally I’d had another topic in mind, but at the seminar that the Renaissance Journalism folks put on in Detroit last fall, I learned about some fascinating research on bilingual or “dual-language” education versus English immersion programs. After talking it over with some journalism gurus, who agreed with me that the bilingual issue was interesting and would be more practical to portray through radio, I decided to try to tackle it.

Weld: How did you put it together? What can listeners expect to hear?

Carsen: In between the usual work, I’d been making trips to gather tape and reading up on the subject. Originally, my editor was Russell Lewis, NPR’s Southern Bureau Chief. He and (WBHM News Director) Rachel Osier Lindley and I originally agreed to structure the project in three parts: first, why the issue is important, even if you, say, are white, live in a gated community somewhere, and don’t have kids; second, the challenges, or why dual-language education isn’t more common in the South; and third, an example of dual-language education being done well.

Well, after one edit with Russell — and new Southern Education Desk Managing Editor Sherrel Stewart, who sat in — the order got flipped around. Sound-rich “dessert first,” so to speak, so as to engage listeners and make them care about the people — the human side — before getting into the more abstract big-picture stuff.

So, what people will hear now is this: Part One — a view from a school in a poor neighborhood that’s doing bilingual education; Part Two — a view from another school in a more middle-class area that’s doing some some pretty incredible things; Part Three — why it’s NOT happening in so many places, with Alabama as a straightforward example; and finally, Part Four, the macroeconomic implications, the “why should someone (supposedly) far removed from the issue should care” part.

Weld: What’s wrong with how these students are being taught?

Carsen: Well, it’s sort of “common sense” to think that teaching immigrant kids English as fast as possible is the best thing for them. But research shows that teaching them their core subjects in their native language actually boosts their long-term academic prospects, including English proficiency. That’s really counterintuitive … until you really think about it. If, say, a Spanish-speaking child is put in English-only immersion, that child not only doesn’t hear as much English from his/her peers, but is getting less math, less science, less social studies, less to attach English words to. Those core content areas are arenas in which to learn academic English, not to mention opportunities to learn the subjects themselves that they’ll likely never get back.

Weld: What surprised you when you were doing the reporting?

Carsen: Two things. First, the above counterintuitive idea that teaching an immigrant kid in his or her own language actually helps them learn English better in the long run; and second, a lot of early resistance to bilingual or dual-language education came from the “they should speak English” mindset, but also from immigrants themselves. Although when you think about it, that makes sense too: someone from another country — and many of these folks are from rural areas and have little formal education — wouldn’t necessarily know that learning, say, science in Spanish, leads to better English (believe it or not, they’re like most people — they’re not regularly reading sociology journals). And from their daily lives in the U.S. economy, it makes sense they’d see learning English first and fast as the key to success.

Weld: How does the way that language minority students are taught impact society as a whole? What is the economic impact?

Carsen: Short answer, listen to Part Four. Slightly longer answer, though the numbers are all predictions and therefore not foolproof, conservative estimates tend to put to aggregate economic costs of Latino high school dropouts alone at hundreds of billions of dollars. It depends on what you consider a subgroup, but basically, kids who don’t speak English as their first language drop out at far higher rates than any other group (not including the learning-disabled) — they have the highest dropout rates and lowest academic attainment of any group. Now many of them — proportionally, more than in other groups actually — drop out to work. But still, the situation represents a tremendous hit to the nation’s — and increasingly the South’s — economy.

Weld: What will it take to change things and how might that look?

Carsen: I think it’ll take the same kind of efforts demonstrated by the people behind the two schools in Georgia I profile. The first one — Unidos Dual Language Charter School — is in a low-income black neighborhood. Basically, the woman who started the school nine years ago was a visionary who wanted to show that the approach could work for all kids. She and some other true believers pounded the pavement, got local and even state administrators on board, and then convinced the mainly African-American community that having their kids not just learn Spanish but learn IN Spanish would help them, not hurt them. There are still real challenges there, but overall, they’re making it work.

The second school — World Language Academy — is sort of a model, and example of what a dual-language approach can accomplish with more community buy-in and more resources. People interested in the issue should really go see it for themselves — there’s a guy named Jason Mizell there. They can tell him Dan Carsen suggested it.

Weld: What is the big takeaway from this series?

Hmm. Big takeaway. I think it’s actually something that in my opinion applies to — really afflicts — the discussion of many of the complex issues we grapple with: “common sense,” or what seems to make sense, doesn’t always make sense, doesn’t always work. We have to try our best to study outcomes objectively — to have a more scientific mindset, even regarding something as ethereal as education — and then adjust what we actually do.

But maybe that was too “big.” Another key takeaway: Most of our schools are failing far too many non-native English speakers (other students too, but these kids often face triple segregation by ethnicity, poverty and language), and whether or not you think they should speak English before coming to school, it does affect all of us.

Learn more about the series “Language-Minority Education In The South” and listen online at www.wbhm.org