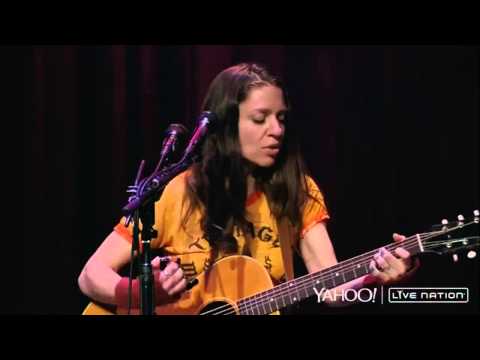 Not just in it to win

Posted By: Online Editoron: May 06, 2015In: Weld for Birmingham
Print Email

Ani DiFranco narrates her personal transformation with each album she writes, as if her body of work is a memoir and each album is a new chapter. Throughout her career, DiFranco has experimented with different styles of music such as  folk, funk, punk and even hip-hop.

Her emotionally-charged and raw storytelling remains constant, however, along with her passion for women’s rights and civil rights.  On her latest album, Allergic to Water, one can find a softer Ani DiFranco as she expands her role of musician to include mother and wife. DiFranco  acknowledges her critics while simultaneously celebrating her expanding roles.

“I wrote these songs after having my second baby so it was a real inward and personal look at my life,” DiFranco said. “I have been criticized that this album is not heavily political, and it’s true. Sometimes I am looking outward but sometimes I am looking inward. Who is just one thing?”

DiFranco’s political views still thrive in her latest work, but it is subtle as she approaches a new era in her understanding of feminism.

“My feminism gets deeper. I’m not over it. I am just now beginning to understand it,” she explained. “Even though this album is more of an inward perspective. It still seeps in. I’ve only begun to engage in feminism and the idea of patriarchy.”

Though DiFranco’s introspection and exploration of these larger themes defines the album’s sound, its recording process was equally defined by a frantic schedule and sleep-deprived evenings – the result of recording the LP from her New Orleans home while being a mother to two energetic children.

“I have to write songs on the sly, behind their tiny backs,” DiFranco explained. “I can’t pick up a guitar without them looking at me and saying, ‘No.’ It’s a jealousy thing. They see me get this far away and dreamy look and they know that not all of my attention is on them. So I create in the wee hours. I’ve never been a great sleeper anyway.”

DFranco toured constantly with her first child without any parental issues, and claimed that her daughter was already a musician. With the birth of her second child, DiFranco and her husband had to readjust to a schedule for a baby that demanded more attention.

“We were overconfident and thought this parenting thing was easier than everyone made it out to be,” she explained, laughing. “But our second child had to be on a tight schedule or he would cause mayhem. It was very humbling. We couldn’t bring him on tour or I’m sure something would have burned down.”

Now the children stay at home with DiFranco’s husband when she is on tour. This allows her to be a full-time mother at home and a full-time musician on the road.

“It is torture to leave sometimes, and I miss them,” DiFranco said. “But I am excited to be on the stage again. It feels like a vacation.”

What keeps DiFranco on the road is not just her love for music but her ability to connect with her fans, who range from young enthusiastic listeners to the older fans who have been with her from the early 1990s, when she released her first album on her own record label, Righteous Babe.

“The energy hasn’t changed. Mainly because I love what I [expletive] do,” she said. “For many years, playing music and connecting with people was the only thing that sustained me. Now I have other things – a family and unconditional love – but that connection is still as important. It has been an adventure and I can’t imagine where I would be without it. And I feel with my fans that we all matured together.”

DiFranco maintained her independent record label and supported musicians while the record industry transitioned through different moguls throughout the years, staying outside the industry by building Righteous Babe, and by constantly touring and performing at coffee shops and college campuses.

The performances garnered a large and devout fanbase. DiFranco’s last show in Birmingham, for instance, saw her cornered by fans after a performance at the now-defunct Five Points Music Hall.

“All these girls were chasing me,” she said. “They were even jumping on the car just to get near me.”

It is this love and energy that propels DiFranco to continue making art. That energy and the ability to connect is important to her, she says, and she carries that energy with her through her work as a musician, poet and activist.

“You don’t participate in social activism to win it all in and of itself,” she said. “If you do it just to win then you will get burnt out. You do it because you believe in it and it makes you happy and it helps you to connect to people that you will be friends with your whole life. Same thing with music. You do it because it uplifts you. You might not make a lot of money doing it but it is still rewarding and lucrative for your soul. Do it for the love of doing it not to get a fortune. But you might get a best friend out of it.”

Ani DiFranco will perform at Iron City on Friday, May 8. That 1 Guy will open. Doors are at 7 p.m.; the show begins at 8 p.m. Tickets are $35. For more information, visit ironcitybham.com.