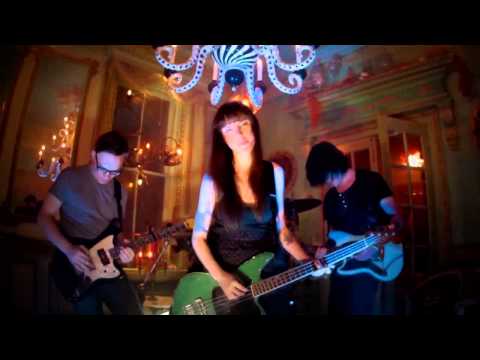 Posted By: Online Editoron: May 06, 2015In: Weld for Birmingham
Print Email

Bruce Springsteen says that you can look at the E Street Band and tell that its  members come from diverse musical tastes, but it all works together when the band plays as a unit. Creepoid could be seen as indie rock’s version of this same concept. The Philadelphia-based quartet’s members bring a variety of personal tastes and influences to the fold to create a sound both fresh and familiar at the same time.

Currently, Creepoid is touring in support of its upcoming release Cemetery Highrise Slum, which is out June 23 on Collect Records. On Wednesday, May 6, the band will perform at Saturn. Ahead of that set, drummer Patrick Troxell briefly spoke about this new album and the band’s diverse set of influences.

Pat Troxell: Actually, this is a whole new method for us. We’ve been a band for a few years, but on those records we were “weekend warriors” with full-time jobs and writing music on the side. In July, we made the plunge together and we all quit our jobs and became a fully-functioning unit. We went out touring for three months and a label made us an offer to do this album. We spent a month and wrote the entire record and spent three weeks recording the entire record.

Weld: The opportunity to focus solely on the music must be very liberating for your band.

PT: We spend so much time together in the van and we’ve done 65,000 miles since July. It’s gone from weekend tours to a couple of months at a time and we’ve learned each other and how to talk to each and other and communicate better. It comes out that way on the album – it flows as a cohesive thing.

Weld: Your sound incorporates ‘90s Grunge and Classic Brit-Pop among other influences. Is variety a goal of Creepoid or is it a natural outpouring of what you’ve absorbed as musicians?

PT: It just literally comes out that way. We’re all from different backgrounds. I grew up on Hardcore and Punk in Philadelphia and then I lived in Austin, Tx. for years. My wife [and Creepoid bandmate], Anna, was into classic Soul when we were kids and it shows up in her bass parts. Our stuff comes out of being an underground subculture. It’s funny how many bands we get compared to that people have never heard of [laughs].

Creepoid perform at Saturn on Wednesday, May 6. Doors open at 8 p.m.; the show begins at 9 p.m. Null will open. Tickets are $10. For more information, visit saturnbirmingham.com.