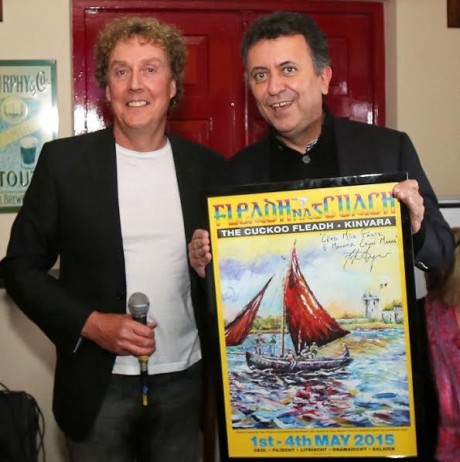 Posted By: Online Editoron: May 07, 2015In: Weld for Birmingham
Print Email

Mark Dwyer with Carlos Eugenio Garcia de Alba, the Mexican Ambassador to Ireland, at the opening of this year’s Fleadh na gCuach, or Cuckoo Festival. Photo by Ger Ryan.

Irish artist Mark Dwyer will be coming to Birmingham starting Thursday, May 14, to present an exhibition of his works. The exhibition will be at Gianmarco’s Restaurant in Homewood, and it will run for one week.

The official opening of the event — by Peter Burke, of Burke Harvey, LLC — will be at 6 p.m., and Dwyer will be on hand to meet viewers and potential buyers.

The artwork is rooted deeply in who Dwyer is and in where he calls home. He is from Kinvara (sometimes alternately spelled Kinvarra in English), County Galway, in the rustic, rural west of Ireland about halfway up the island’s western shore of the north Atlantic Ocean. County Galway is the southernmost county of the historical and cultural province of Connaught — which comprises the northwestern quarter of the island — with Kinvara being one of the last stops before entering the southwestern province of Munster.

The landscape around Galway and Kinvara is various, including both boglands — the equivalent of swamps in the United States — and mountain ranges, some reaching up to about 3,000 feet above sea level. As it happens, County Galway is also home to Lough Corrib, the largest lake within the Republic of Ireland.

It is the boglands, and the historic ships that negotiate their extensive inland waterways, on which Dwyer focuses in his art. Historically, people have harvested from the boglands such things as turf and seaweed, used to fertilize the nutrient-poor soil that makes up most of Ireland’s western coast. This is a rich history, and Dwyer captures it in the way that only a native eye can do.

The boats, which are the other major focus of Dwyer’s work, are called “Galway hookers” — the name is believed to be taken from an old Dutch word many centuries ago — and they make for compelling inspiration for Dwyer’s paintings. They are over 200 years old, built of oak and between 35 and 40 feet in length. They are painted black, using bitumen — a viscous, tarry mixture of hydrocarbons also used for things like road surfacing and roofing — which protects them from the sea.

Most importantly, the boats needed to be very easily maneuverable because of the difficulty of navigating the boglands, but also because the boats needed to navigate the small, rocky bays and harbors all along the steep and craggy western coast of Ireland. The coastline is exposed directly to the Atlantic Ocean, which means the winds coming in make them sometimes inhospitable to mariners.

The boats were used to bring the turf and seaweed down to Galway and Kinvara from areas like Connemara, which is also in the west of Ireland but farther up the coastline to the north.

“As time went on,” Dwyer says, “and roads and trains were built, [the boats] weren’t needed anymore, but they have kept the tradition alive by holding a festival. It’s in August, and it’s called Cruinniú na mBád, which is the Irish for ‘gathering of the boats.’”

“The boats are extremely rare, and so what they do is the boats sail from Connemara, and they cross over Galway Bay into Kinvara bringing their turf. And what they do is they race them down, so the first boat in to empty their turf onto the pier is the winner. And that’s how they’ve kept the tradition alive, and they’re majestic boats. … The sails tend to be red, a reddish-brown, and it’s because of the dye that was used in the fabric.”

The contrast between the black-painted hulls of the boats and the deep red-brown sails is a striking one, and sitting in the water amidst the beautiful boglands or in a harbor, the image is even more arresting. As Dwyer says, “The black boats, the red sails, and deep blue of the sky and sea: it’s absolutely stunning.”

Dwyer’s technique is one that will perhaps be unfamiliar to some. He paints using only palette knives, where the artist takes paint onto a flat blade — which, despite the name, does not have a sharpened edge — and slathers it onto the canvas. It is a difficult way to paint, because the artist must complete the painting all in one go. If the paint is allowed to dry, due to its thickness it will dry into an uneven texture, making it impossible to drag more paint onto the canvas as the artist wants.

Doing fine detail is particularly difficult with this technique. Dwyer says, “If, for example, I’m doing a Galway hooker, and I’m going to put the mast in, I’ve got to be able to fill my palette knife with paint and pull it up very quickly, and you only get one shot at it. So you’ve got to pull your paint up, get that mast in, and it has to be in its right place. If the paint dries out, and then you try and do that, when you go to pull the paint up, it will catch in all the dry paint.”

This makes Dwyer’s work even more impressive. Some of his paintings are full of fine details, such as the varying colors of the grasses and plants in the boglands or the treads of a tractor tire as a farmer makes his way across a field. It is hard to imagine how one could make small details when the technique does not even allow for the artist to let the paint dry.

Dwyer has received very high accolades, perhaps the highest of which is his recognition by the Irish Prime Minister Brian Cowen, who in turn brought one of Dwyer’s works and presented it to US President Barack Obama in 2009. So, Dwyer’s work, among other places, currently sits in the private collections of the prime minister of Ireland and the president of the United States.

It is a fairly long tradition that the Irish prime minister (or Taoiseach in Irish) brings a bowl of shamrocks to the White House every year. This is because Ireland took a neutral position in World War II, creating rather difficult relations with the US. However, in 1956, the prime minister brought a bowl of shamrocks to the White House while then-President Dwight D. Eisenhower was vacationing in Key West. He was invited back the next year to deliver a bowl to Eisenhower personally, and this has been done annually ever since.

So, the fact that then-Prime Minister Cowen in 2009 specifically commissioned a painting from Dwyer to bring to the president in lieu of shamrocks is quite a high honor. Apparently, Obama has roots in County Offaly, in central Ireland, so the prime minister asked Dwyer to paint an image of Offaly boglands to bring as his gift. This should give an idea of the quality level and visual richness of Dwyer’s art.

Dwyer has received many other honors, such as being asked on four occasions to paint the official poster for the annual Fleadh na gCuach, or Cuckoo Festival. This is an annual Irish music festival in Kinvara, the name of which comes from the fact that the cuckoo signifies the arrival of summer. The poster must include, along with a cuckoo, Dunguaire Castle, a 16th-century tower on Galway Bay just near Kinvara. This year’s edition of the poster will be one of the paintings on display at Dwyer’s exhibition; unfortunately for anyone interested, it has already sold.

It was at the Cuckoo Festival that Dwyer met Birmingham attorney Peter Burke, who vacations in the area and who will be introducing Dwyer’s exhibition here in Birmingham. Dwyer said he would like to personally extend his welcome to everyone here in Birmingham, as the exhibition is completely open to the public. He will have 30 paintings on display, and he will be on hand to meet people.