LATEST NEWS
Home Weld for Birmingham Dreams in the wind 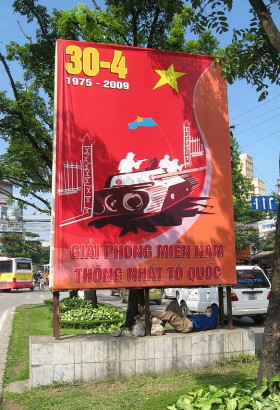 Dreams in the wind

Posted By: Online Editoron: May 12, 2015In: Weld for Birmingham
Print Email

A sign in Hanoi commemorates the Communist Victory in Saigon on April 30, 1975. Photo by Dragfyre/Wikimedia Commons.

In haste to quit April, we neglected to remark the passage of a significant 20th century milestone. On April 30, 1975, the United States ended its involvement in the Vietnam War, when the city of Saigon surrendered to the North Vietnamese Army. It was the first war America had ever lost, and the manner of its prosecution and conclusion still casts shadows across the republic.

There may not have been any official commemoration of the occasion here—over in Vietnam, the day was celebrated with parades and speeches— but unofficially, the Public Broadcasting System gave a timely jog to our collective memory by airing several specials pertinent to the event, the best of which being a documentary directed by Rory Kennedy, entitled Last Days in Vietnam.

Kennedy was in utero when her father, Senator Robert Kennedy, was assassinated in 1968, but her film is compiled with an eyewitness’s assuredness. It was up for an Academy Award last year in the Documentary division, losing out to CitizenFour, a film about another kind of war.

Many viewers old enough to remember the end of the Vietnam War may have been surprised by how much they had forgotten about it. After all, the end of the war had been ballyhooed a couple of times before it actually took place. There was the end of the war President Richard Nixon promised to get himself elected in 1968. Then there was his announcement of a massive troop withdrawal in the spring of 1970, just before he and his BFF Henry Kissinger actually widened the war by invading Cambodia. Proclaiming the approach of “peace with honor,” Nixon sent emissaries to talks in Paris in 1973, but the actual cessation of hostilities was still two years away.

Kennedy makes the old story seem fresh by utilizing a variety of film footage never seen widely before and by deftly organizing the information she collected. It becomes clear that more than a war was lost in Vietnam, and that one of the major casualties was trust in the federal government. From the beginning of our involvement, in 1946 when Harry Truman okayed military assistance to France to help it put down the insurrection of Ho Chi Minh, till the end in 1975, when Gerald Ford presided over a bungled evacuation of the future Ho Chi Minh City, the road to war’s end was cratered by the serial duplicity of those who conducted it. As the film reveals, not one of the six Commanders-in-Chief involved in our Indochina adventure ever spoke truth about it to the American people. Fifty-eight thousand Americans died to keep that domino from toppling.

Perhaps the most heartbreaking of the last days in Vietnam was that April 30, 40 years ago. South Vietnamese citizens who had collaborated with the Americans were certain to be targeted by the Communist government when it took over, and thousands had come to the American Embassy in hopes of being flown out for their safety. The film suggests that the American ambassador, Graham Martin, did not competently organize an orderly evacuation and that, abetted by Washington, he actually ended the airlift prematurely. Falsely informed by a Vietnamese-speaking Marine on his way out that a big helicopter was on its way to save them, hundreds of endangered citizens were left behind, gazing skyward in vain for what one survivor called “the dream in the wind.” Many were later arrested and sentenced to hard labor in “re-education camps.” Many were summarily executed.

There is no North Vietnam or South Vietnam anymore. A unified Vietnam took their place, politically Communist but pragmatically capitalist, much like their neighbors up the coast in China. The wounds of war have been salved with hard currency; according to The Washington Times, trade between the U.S. and Vietnam topped $36 billion last year.

You’d think official Washington might have learned hard lessons from failure, but history is repeating anew. At this moment, another American president is actively concealing from the American people our public policy toward Vietnam and 11 other countries in the Asia-Pacific region.

The president, of course, is Barack Obama, who once promised “an unprecedented level of openness in government.” In the process of bringing a trade agreement called the Trans-Pacific Partnership to fruition, he has indeed done something unprecedented: a multinational agreement, crafted in secret negotiations, the details of which would be kept classified for four years after the agreement goes into effect.

There is much that is questionable about the TPP, even whether or not it is an actual trade agreement. “It’s not really about trade,” says former Secretary of Labor Robert Reich, “but about making the world safer for global corporations.” Of the 29 chapters that comprise the TPP agreement (and we know this only because WikiLeaks has been making the classified document available), only five deal with trade in the traditional sense. “The rest embody the most florid dreams of the 1 percent—grandiose new rights and privileges for corporations and permanent constraints on government regulation,” according to The Nation. “They include new investor safeguards to ease job offshoring and assert control over natural resources, and severely limit the regulation of financial services, land use, food safety, natural resources, energy, tobacco, healthcare and more.”

One phrase often used to describe the TPP is “NAFTA on steroids.” The Economic Policy Institute calculated that Alabama lost almost 17,000 jobs thanks to that previous trade agreement. No telling what similar benefits we’ll see from the TPP.

Congress is trying to fast-track approval of the TPP this week, to get it passed without the chance for debate or amendment. So far, only two members of the Alabama congressional delegation, Terri Sewell and Mo Brooks, have indicated their opposition to this stealth attack by our corporate overlords.

I suppose it’s possible that American lawmakers will come to their senses and quash this boondoggle. Then again, it may just be another dream in the wind.