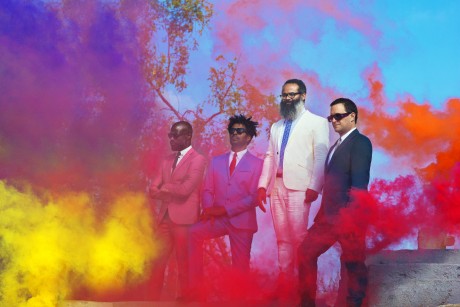 Posted By: Online Editoron: May 13, 2015In: Weld for Birmingham
Print Email

Photo by JUCO/courtesy of the artist.

“Rain comes down like it always does,” sings Tunde Adebimpe on “Seeds,” the title track of TV on the Radio’s latest album. “This time I’ve got seeds on ground.”

In some ways, the lyric serves as the record’s thesis statement, a declaration of hope in the face of inevitable hardship. It’s an earned one, too, considering that Seeds followed the roughest patch of the Brooklyn band’s 14-year career. In 2011, shortly after the release of the band’s fourth album, Nine Types of Light, bassist Gerard Smith died of lung cancer. His loss resulted in a band unsure if they wanted to continue; Adebimpe later told Billboard that he considered ending TV on the Radio after finishing the Nine Types of Light tour.

Instead, the group regrouped and returned to the studio two years later to begin work on their fifth album. According to guitarist and co-lead vocalist Kyp Malone, the group approached songwriting for the album differently than they had with their previous, more experimental releases.

“We took it as a challenge collectively to see if we could write good pop music and not try to make it weird for weirdness’ sake,” Malone said, speaking ahead of the band’s May 17 performance at the Hangout Music and Arts Festival in Gulf Shores. The result was last year’s Seeds, an effervescent collection of songs that has widely been recognized as the group’s most accessible and upbeat effort to date.

Though the band traded the cacophonous edge that complemented the conflicted emotions of critically acclaimed efforts such as 2006’s Return to Cookie Mountain and 2008’s Dear Science for shimmering synthesizers and more traditional guitar riffs on Seeds, Malone argues that the album’s lyrics retain the emotional complexities of its predecessors.

“I feel like emotion is a more nuanced thing than ‘happy’ or ‘sad,’” he said. “A lot of stuff that people describe as ‘doomy’ [can actually] bring people comfort and happiness. And sometimes things that have an overt optimism seem false to me and feel like a lie, and that’s something that can end up feeling very depressing.”

It makes sense, then, that even the album’s upbeat songs have an underlying melancholy. The pulsing pop of “Happy Idiot,” the record’s energetic lead single, is undercut by lyrics about emotional numbness following a break-up. On “Trouble,” Adebimpe repeats, “Everything’s going to be okay / Oh, I keep telling myself / Don’t worry, be happy,” as though he’s having difficulty convincing himself.

Both of those songs, like most of the album, examine personal relationships in a way that fits with the album’s pop stylings. But the record’s relatively intimate focus necessitated a shift away from the more politically minded material that had been a major part of the band’s previous work. There are no explicitly anti-war anthems like “I Was a Lover” or “Red Dress” on Seeds, though not for Malone’s lack of interest.

“I wrote plenty of protest music in the process of making this record, but nobody wanted it,” he said, laughing. “It’s sitting on a hard drive.”

Those omissions are just the result, Malone says, of the “ebb and flow in the group dynamic.”

“It’s a collective effort, and sometimes you get your way and sometimes you don’t,” he said. “Ultimately, if I got my way all the time, it wouldn’t be a very interesting band. It’d be a lot more narrow. So I’m thankful for that.”

“It does feel kind of funny sometimes, especially with where we are right now in the world,” Malone added. “I don’t think everything’s going to be alright. I don’t go with that as a presumption. Maybe in the grandest picture.”

Malone’s misgivings about what the future holds ostensibly stand in contrast to the hopeful themes of Seeds, but they might also provide that hopefulness with greater weight. After all, hope has limited value when the future is certain — and the future is far from certain for TV on the Radio.

And if bizarre noise-punk band Ice Balloons (who claim Malone as a band member on their Facebook page) are in the studio, Malone says he’ll join them.

“I [expletive] love Ice Balloons,” he said. “I have a very special place in my heart for Ice Balloons. Any time that they’re free and I’m working, I’m going to jump on.”

After that, Malone says that TV on the Radio’s future remains undecided, though he sounds guardedly optimistic.

“[We’re just going to] wait and see,” Malone said. “I don’t want to make any grand statements one way or the other, and I don’t want to speak for anyone else about that. I feel like the shows have been great. When we’re on stage, I have felt that absolutely, this is a super viable creative relationship.”

“You can’t fake time,” he added. “When you put that much time in with people, making music, you get your own thing going. How much time do you have in a lifetime to develop those kinds of relationships?”

TV on the Radio will perform at the Hangout Arts and Music Festival in Gulf Shores on Sunday, May 17. For more information on the festival, visit hangoutmusicfest.com.