That was the message following the Indians 14-7 victory over Mortimer Jordan on Thursday night, on a football field with no markings except for lines denoting ten-yard splits.

“We are trying to figure out who we can count on to play for us next year,” Glover said.

The varsity rosters for each team played only the first two quarters, with the remaining half of football left to the junior varsity squads for each school. The first quarter was scoreless, but not without some notable moments. 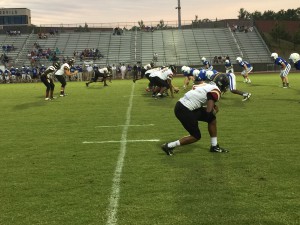 Pinson Valley took the ball first and turned the ball over only a few plays into the possession on a Jackie Matthews interception. Mortimer Jordan moved the ball all the way to the one-yard line before the Indian defense stood tall and stopped the Blue Devils on fourth down.

Despite a slow start for Matthews, the rising senior rebounded to throw two touchdown passes in the second quarter, a 60-yard catch-and-run to Errius Collins and a 20-yard strike down the middle to Liallen Dailey.

“Right now, he’s the number one (quarterback),” Glover said of Matthews. “He had some playing experience last year and did a good job in a tough environment. I’m comfortable with him in there.”

The defense continued its strong play after the initial goal-line stand, producing big plays in the second quarter as well. C.J. Rudolph contributed a pair of sacks and Jay Woods made a strong tackle behind the line of scrimmage on a well-designed screen pass. Woods is encouraged by the progress that the defense made throughout the spring.

“It’s been great,” Woods said. “We still have a couple things to work on but we did great tonight. I’m really impressed and proud of my teammates because we came out and fought for a (win).”

Glover believes that his defense possesses a strong linebacker core, but Woods, a cornerback, is hoping the secondary will become a strong point of the unit as well. To do so, there are a few things that the group has to improve upon.

“We have to listen to the coaches and get our calls right,” Woods said. “We need to do what we’re supposed to do.”

In the junior varsity portion of the game, rising junior Zach Moore got the majority of snaps at quarterback. He completed a deep pass to Dilan Henderson in the third quarter, as Henderson hauled in the ball and stretched for the goal line, coming up a yard shy.

Amari Phillips scored on a quarterback keeper in the fourth quarter and Tracey Reed scooped up a fumble and took it 50 yards for a touchdown to wrap up the junior varsity’s 14-0 victory.

During the team’s huddle following the game, Glover made it a point to update his team on what the goals were for the fall. He wants more than being satisfied with a mere playoff berth.

“Our goal is not to make the playoffs,” he said. “That needs to be an expectation for us now. Our goal is to win our region. But Clay will have something to say about that.”

Pinson Valley gets its 2015 campaign started with a contest at Hartselle on August 21.