Players and family gathered at the baseball field Monday night to wrap up the season, honor the seniors, and celebrate Jacob Brown and Blake Mayes as they signed their scholarship papers. 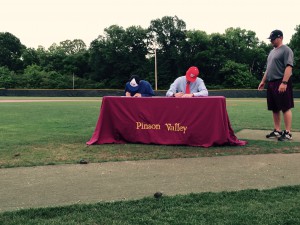 “Their hard work has paid off to where they can get their college paid for the next two years,” coach Shane Chappell said of the two signees. “It’s great for this program. It’s great for these guys and their families.”

Outfielder Jacob Brown will continue his playing career at Williams Baptist College in Arkansas, where he will run cross-country along with playing baseball. In 131 at-bats this season, Brown accumulated a .254 average with four doubles, 12 runs batted in, and a .331 on-base percentage.

“This has been my dream since I was three years old playing tee-ball.” Brown said. “I’m really excited to get to go play.”

Brown was initially approached by the school to run cross-country, which he had not previously considered trying in college. After talking it over with the coaches at the school, the opportunity presented itself to play both sports, which he jumped at.

Blake Mayes served as the Indians’ top relief pitcher this season, amassing 36 2/3 innings with a 4-2 record, 2.38 earned run average, 29 strikeouts, and 11 walks. His sidearm delivery will take him to Wallace Community College Selma in the fall.

“It’s every kid’s dream to keep playing ball,” Mayes said. “I know I wouldn’t be where I am without my family and coaches. I’m pretty excited for the next two years. I can’t wait.”

Pinson Valley also honored five other seniors on the night. Baker Hodge and Gage Farley have signed to play at Calhoun Community College. Brett Jordan will begin his career at Alabama Southern Community College. Hunter and Destin Davidson have also garnered interest from a number of schools, leaving open the possibility that each of the program’s seven seniors could play baseball collegiately.