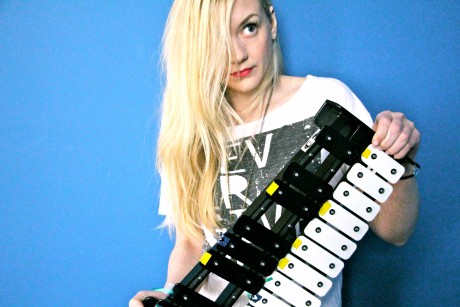 Posted By: Online Editoron: May 20, 2015In: Weld for Birmingham
Print Email

Emily Kinney performs at Saturn on Friday. Photo courtesy of the artist.

During Emily Kinney’s four-year stint as a cast member of AMC’s The Walking Dead, the show made room for several musical interludes featuring the actress — interludes which, if not necessarily contributing to the show’s narrative momentum, showcased Kinney’s folk star-ready singing voice. Now Kinney is touring ahead of her new album This Is War (slated to be released in August), which sees her exploring pop territory much cheerier than the zombie apocalypse.

Captain Green describe themselves as “Louisiana’s premier intergalactic space jazz band,” which might just tell you all you need to know. The band’s ambitious cocktail of psychedelic fusion jazz jams but not indulgently, has a sense of whimsy without it being overbearing. The group are touring behind their latest record, Protect Each Other Together, an adventurous collection of instrumental tunes influenced by Frank Zappa and New Orleans jazz.

Shelby Lynne won the Grammy Award for Best New Artist for 1999’s I Am Shelby Lynne, even though it was her sixth studio album. The county singer is now on her 13th record, I Can’t Imagine, which may be her most emotionally raw to date (sample lyrics: “I threw these colors down in a fit of rage/ My feelings hardly fit onto the page”). As her belated Grammy win proved, it’s never too late to discover Shelby Lynne.

Richmond, Va.-based band Shadow Age specialize in ethereal post-punk that fits easily into the same moody “dark wave” subgenre as classic bands such as Joy Division and the Cure. The group’s DIY Birmingham show will also feature the excellent local band In Snow, who push that same surreal, post-punk aesthetic into experimental, even ambient territory.

Listening to Wild Throne is an unpredictable experience. At times, such as the beginning of their song “The Wrecking Ball Unchained,” they’re soft and melodic, though that gentleness can suddenly transform into a bruising metal riff. The Bellingham, Wash., band will bring those progressive song structures to Saturn on Tuesday night.