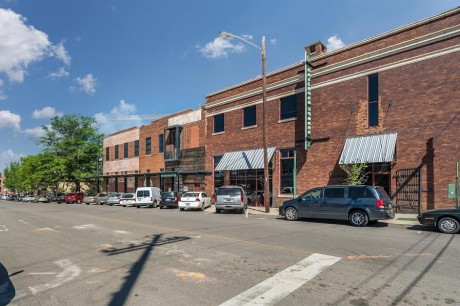 Posted By: Online Editoron: May 22, 2015In: Weld for Birmingham
Print Email

Twice a month, the city of Birmingham’s Design Review Committee convenes at the Auburn Urban Studio to discuss plans to make alterations to structures that fall within one of the city’s many historic and commercial revitalization districts. This column summarizes recent DRC activity, with projects grouped by type and location. This edition of Design Review recaps the DRC meeting from May 15, 2015.

The elevations for the new building at GETH Church of Apostolic Faith (213 Rev. Abraham Woods Jr. Boulevard) were previously approved, but at the time the committee requested a site plan. The old building was damaged by fire and the lot has been prepared for construction. The exterior will be concrete block with wood windows. When boxwoods were presented as the landscaping choice, a committee member let the presenter know there is currently an issue with blight on these plants and recommended they change to holly instead.

The demolition for the new intermodal bus station (1700 Morris Avenue) has been completed and the foundation is underway. The developer presented the building materials, including a gray brick, smooth clear anodized aluminum panels in the soffit and face of the roof overhang, and glass with a neutral cast. The overall color palate is neutral to slightly cool, with an interior blue stripe visible through the glass. All landscaping, hardscape, and signage will return as a name for the station has yet to be determined. The committee reminded presenters that a master signage plan would be needed for the facility.

Plans were presented for the upcoming Sunbelt Birmingham Parkside Hotel (Second Avenue South, between 17th and 18th Streets), a dual-branded Hilton Hotel. The site plans showed the hotel will front on Second Avenue South while the automobile drop-off and parking lot will be between the building and Third Avenue South. There will be pedestrian connections on all three sides as well. After meeting with the committee for a work session, the developers worked to engage and activate the area – meaning they want to ensure that the area has pedestrian activity. The façade will have a brick base and a brick tower will separate the Hilton Garden Inn and Home2 Suites. Landscaping will comply with the current Parkside guidelines. This presentation requested conceptual approval and will return with materials and signage.

Bethesda Life Center (321 19th Street, Ensley) plans to add a mural on the side wall of their building. The abstract mural was designed by artist Antoine Oden, an Ensley native. Representatives showed the sketch of the mural as well as samples of other murals by Oden.

After nine years of operation, the former 26 restaurant (1210 20th Street South) will be reintroduced as the 5 Point Public House. The signage will conform to the measurements of the existing signpost used for 26. However, the internally lit, acrylic sign will be smaller than the previous sign.