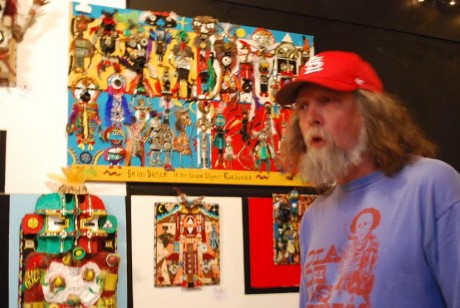 Between the gods and the living

Posted By: Online Editoron: May 24, 2015In: Weld for Birmingham
Print Email

Artist Craig Legg presents his exhibit, The Sacred and the Mundane at the Future Home of the East Lake Performing Arts Center. Photo by Rebecca Sheehan.

The stringed lights flick on and give the room a completely new dynamic.

“The walls were totally black, and you had all this lumber piled in the middle, you could barely walk around it,” said Craig Legg. The lanky artist deftly dismounted the ladder and walked to the middle of the lobby of the former Cinema Blue, a now defunct pornographic theater.

“There was no light, except for that fluorescent light. I couldn’t see the ceiling, so I didn’t know what I was getting into … I knew there was possibility.”

Legg, along with the theater’s new owner, Vince Amaro, renovated the lobby screening room in time for Legg’s new found-object art show The Sacred and the Mundane: Transforming the Worldly Discarded into Art of the Supernatural.

Legg, who was responsible for a Sun Ra Arkestra exhibit last year at T Rex tiny gallery, explained that The Sacred and the Mundane is a pun on “the sacred and the profane.” He said he always thought the word “mundane” had a negative connotation, but a quick dictionary search changed his mind.

“All it means is ‘of the world,’” Legg said. “So, it doesn’t mean it’s dull or unimportant; it’s just of the world. Because some of these found objects are not dull, that at first I thought were dull or discarded, are actually totally interesting.”

Legg’s pieces are inspired by the artist’s research on Hopi Indian kachinas, divine creatures who act as intermediaries between the gods and the Hopi. He described his process in developing The Sacred and the Mundane as starting out meticulously reproducing the mystical Hopi beings, checking every design, color and the spiritual meanings behind them.

“I was striving for authenticity and was having a great time doing it,” Legg said. “And then, I somehow became aware of cultural appropriation.”

Legg researched the term and discovered that he was guilty of representing holy Hopi objects as artwork.

The kachina project morphed into Legg’s own creative celebration of cast-offs.

Masks, collaged pieces and sculptures stare down at the viewer. Each is made of what would otherwise be considered detritus. Legg’s artistic vision allows him to hone in on an inspiring piece of debris — a feather, an empty toilet paper roll, a broken light bulb — and bring its best qualities forth to complete the whole work.

Two of Legg’s favorite sources for ideas are twisted metal and Styrofoam.

“I love car wrecks, and things of metal that’s smashed and totally distorted in some ridiculous way,” Legg said. “It just looks fabulous, like something you can’t come up with.”

Styrofoam is a central medium in the installation. “The Altar of Found Objects” in the front of the makeshift gallery is constructed almost solely of unaltered pieces of package Styrofoam stacked into a pyramid. Legg, who used to operate Downtown Birmingham’s recycling center, explained that his research of pre-Columbian architecture influenced his appreciation for the engineering behind Styrofoam molds.

The College Theater, as it was originally known, opened in 1948 at 7604 First Avenue N. under the ownership of Newman H. Waters and was named after nearby Howard College. Legg reported that the theater, a second-run house, showed typical 1950s and ‘60s Western, sci-fi, beach and Elvis movies for a dime.

The house of the theater would seat 700 and still retains its light green, art deco-style crown molding. Legg noted that current and former East Lake residents recalled seeing Godzilla in the theater while sharing Junior Mints with friends. Another admitted to sneaking in the side door to save 10 cents.

The opening of the Eastwood Mall Theater in 1964 was the first death knell for the prosperity of the College Theater.

In the ‘70s, the Cobb Theatre chain purchased the building and reopened it as The College Art Theater in order to appeal to a new audience. The “art-house” flicks on the screen were soft-core pornographies that had risen in popularity nationwide. 1974 saw an economic decline, “white flight” and the closing of business throughout East Lake.

The adult film industry, however, thrived. The College Art Theater was sold and reopened as Cinema Blue, and the large house seating area decayed for the next 40 years. Instead, Cinema Blue used only the lobby area as a screening room and a labyrinth of coin-operated video viewing booths sprung up throughout the building.

Next door, Birmingham Adult Books moved in to stay. The business is still in operation selling sex toys and videos.

Despite political campaigns against Cinema Blue and the neighboring adult video stores, it took the owner’s resignation to finally shut the business down.

Since Amaro purchased the building two years ago, things have been moving slowly. Amaro, a developer from East Lake, said he’s trying to get more investors on board with his plan to establish the theater as the East Lake Performing Art Center. Legg’s art show flyer lists the venue in a proud title font (The Future Home of the East Lake Performing Art Center) as if some cosmic gift is simply waiting on cumbersome human lollygagging.

As it stands, Amaro and Legg are both hopeful the theater can be returned to its former glory as a haven for family-friendly arts and entertainment, and ultimately help revitalize the neighborhood altogether. There is a lot of work ahead. Legg, who has experience renovating theaters in Texas, said that he would lend his expertise to Amaro.

No amount of experience or enthusiasm from Legg is likely to make much difference when it comes to dismantling Birmingham Adult Books, a point Amaro believes could interfere with the development of an artistic haven on First Avenue in East Lake. With the East Lake Performing Arts Center offering child-friendly entertainment, the triple-X store stands as a seemingly irremovable reminder of the area’s sordid past, discouraging potential investors and theater patrons from backing the development in the current location.

Amaro said that local and state politicians have campaigned for decades to destroy the owner’s hold on the store, dishing out hefty fines that the small store has been able to somehow pay off.

Some residents of East Lake have reported that they want the store gone and they want to clean up the area. Politicos have — according to some in the neighborhood — supposedly thrown the law at the business in the form of staggering fines, and yet the establishment remains in operation.

A phone call was made to Birmingham Adult Books in an effort to contact the owner of the shop. The woman who answered the call said that it was against the store’s policy to provide the owner’s contact information and that the owner did not live in Birmingham before hanging up.

In the illuminated lobby of the Future Home of the East Lake Performing Arts Center, Craig Legg picked up his “salad bowl love banjo” and strummed an unrecognizable tune. He admitted that he isn’t a musician, but a tempered frenzy toppled out of his mouth when asked what he envisioned as the future of the performing arts center.

The Sacred and the Mundane: Transforming the Worldly Discarded into Art of the Supernatural is open Saturdays 10 a.m.–3 p.m., or by appointment through May 31. Free. For more information, call (205) 410-7702.